75,000 Xiaomi Redmi Note Phones to Go on Sale on Tuesday via Flipkart 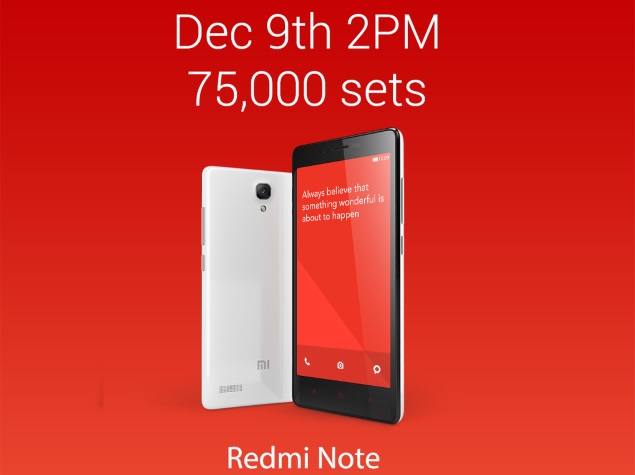 The firm in a tweet on Monday announced the number of Xiaomi Redmi Note units going on sale via Flipkart on Tuesday.

The first flash sale on December 2 saw 50,000 Redmi Note units going on sale. The sale was successful in the manner the Mi 3 and Redmi 1S flash sales have been in the past. The Chinese smartphone manufacturer announced that 50,000 units of the Redmi Note (Review | Pictures) were up for out of stock in just 6 seconds on Flipkart.

Connectivity options on the Redmi Note include GPRS/ EDGE, 3G, Wi-Fi 802.11 b/g/n with Wi-Fi Direct and hotspot functionality, Bluetooth 4.0, a Micro-USB port with OTG support, and A-GPS. It is powered by a 3100mAh battery.

Notably, what is arguably the cheapest 4G LTE smartphone in India, the Redmi Note 4G, will launch in India in the second half of December at Rs. 9,999 via flash sales and Airtel stores.