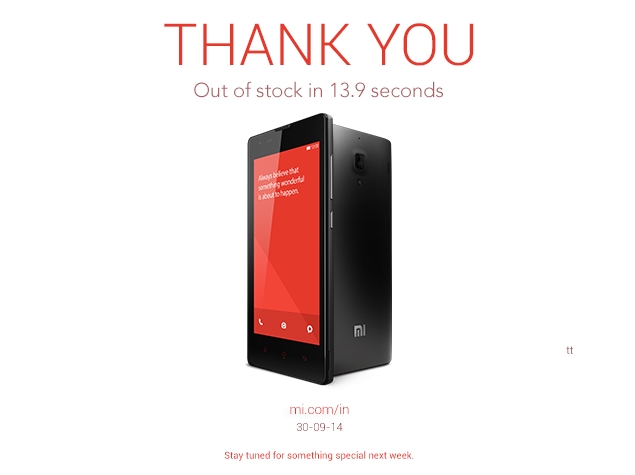 60,000 units of Xiaomi's Redmi 1S available in the fifth flash sale via Flipkart on Tuesday went out of stock in 13.9 seconds.

The news was announced by @MiIndiaOfficial on Twitter, adding that users should stay tuned for "something special next week."

Thanks for supporting us. Stay tuned for something special next week! =) pic.twitter.com/13JQAAltKr

As of now, Flipkart has cumulatively seen 240,000 Redmi 1S units going out of stock in 31.2 seconds in its five flash sales thus far, according to the details revealed by Xiaomi.

This was the second flash sale that saw up to 60,000 Redmi 1S units going on sale, an increase of 20,000 units compared to previous occasions which saw 40,000 being made available. The sale once again saw both happy and unhappy customers, as evinced by the tweet replies to @MiIndiaOfficial's announcement.

@MiIndiaOfficial This was my 4th attempt.This time also no luCk

@MiIndiaOfficial lol i dont know why will you lie....but i tried at the same istant and it showed out of stock huh

Flipkart has updated its Xiaomi page to say the next Redmi 1S sale is on October 14, and that registration will begin from Tuesday at 6pm IST. This ties in with Xiaomi's "something special" announcement for next week, indicating the Chinese handset manufacturer will bring the Mi 3 (Review | Pictures) back on sale - as it had announced earlier this month.

The Flipkart page suggests consumers to register for each flash sale separately and notes, "Registrations will not be carried over. You need to register again for next sale."

Considering that limited stocks of the Redmi 1S (Review | Pictures) will be available in India, the popular e-commerce giant has revealed that it will limit orders to one phone per registered email ID per sale.

Recently, speaking at a conference, the company's India head Manu Jain confirmed that it would be bringing the Mi 3 back on sale in India at least one more time. Jain did not give too many details, but he did suggest that the Mi 3 flash sale will take place around Diwali.