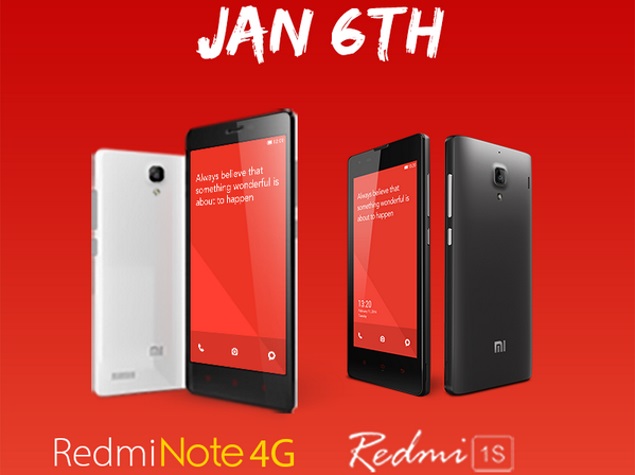 Xiaomi's budget 4G-enabled phablet, the Redmi Note 4G, went up for its second flash sale on Flipkart in India on Tuesday, and this time it just took just 5 seconds for 50,000 units to be listed as 'out of stock'. Xiaomi India Head Manu Kumar Jain revealed the latest flash sale figures on Twitter.

Today's sales of Redmi Note 4G: went out of stock within 5 seconds. Thank you Mi fans for your awesome support. @MiIndiaOfficial

Additionally, the company on Monday had claimed to cross 500,000 registrations this week for the Xiaomi Redmi Note 4G and Redmi 1S combined. The figures were again revealed by Xiaomi India Head on Twitter.

We have received an overwhelming response of 500+K registrations across Redmi Note 4G & Redmi 1S this week. @MiIndiaOfficial

The company on Tuesday ahead of Redmi 1S flash sale, which kicked off at 5pm IST, revealed that the total number of handsets available this time for flash sale would be just 20,000.

Notably, the company in a tweet on Monday had announced that 40,000 Redmi 1S units will be available for the flash sale on Tuesday.

The company explained the halving said in a tweet, "This is due to an unforeseen logistics delay. We apologize for the inconvenience caused! Be assured - we will make it up in our future sales."

Interestingly, this was the first time that Xiaomi was holding flash sales for two of its smartphones on the same day.

The first flash sale last week for the Redmi Note 4G phablet saw 40,000 units of the smartphone going out of stock on Flipkart within six seconds of becoming available. The Redmi 1S, on the other hand, went on sale last month after the company received some relief from the Court to sell handsets based on Qualcomm chipsets in India.

Late last month, Xiaomi reached a major milestone where the company claimed to have managed to sell 1 million smartphones in the country.

To recall, the Chinese manufacturer, also referred to as China's Apple, entered the Indian market only in July with its Xiaomi Mi 3 smartphone, and so the feat was quite impressive as this implied Xiaomi managed to sell 1 million handsets in under 6 months.