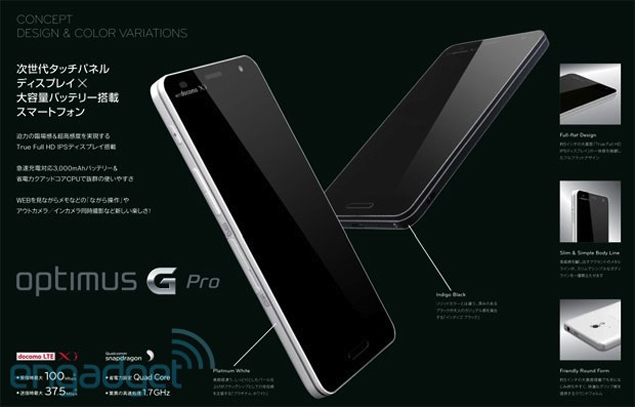 First details of the successor to LG's Optimus G have leaked online suggesting the new device will feature a 5-inch full-HD display, reports Engadget via Blog of Mobile.

A leaked slide of the the LG Optimus G Pro reportedly mentions that the smartphone will run on Android 4.1 Jelly Bean, come with a 13-megapixel rear and 2.4-megapixel front cameras and sport a 5-inch 1920x1080 pixel display.

Underneath, the Optimus G Pro will be powered by a 1.7GHz quad-core Qualcomm Snapdragon S4 Pro APQ8064 processor with 2GB RAM, come with 32GB of internal storage, a 3,000mAh battery and LTE support as well.

The smartphone seems to measure 139x70x10 mm, weighing 160 grams and is likely to come in two colours of black and white.

The image in the slide also indicates that the Optimus G Pro will be launched by NTT DoCoMo in Japan sometime this spring (with the model number LG L-04E). The current Optimus G is sold in Japan, South Korea, Canada, and the United States.

The specifications for the Optimus G Pro seem to be quite similar to the rumoured Optimus G2 device. Previous rumours for the Optimus G2 indicate that the smartphone will feature a  5.5-inch full-HD display, a quad-core 2.0/2.5GHz Krait processor, at least 2GB RAM, a 13-megapixel camera and support 3rd generation LTE radio. Whether or not these are two different smartphones from LG remains to be seen.

The new smartphone will compete in the same league as the recently launched Sony Xperia Z (and ZL), Huawei Ascend D2 and the unannounced HTC M7, and Samsung's Galaxy S IV. There is still no official word from the Korean manufacturer on the smartphone's availability, though we think the company could launch this smartphone at MWC next month.

LG's Optimus G seems to be doing pretty well with company recently revealing that it sold 1 million units since its debut a couple of months ago as reported by Yonhap News Agency.

Recent murmurs suggest LG is planning to launch another full-HD smartphone in the first quarter of 2013. Codenamed 'GK', the device is expected to feature a 5.5-inch screen and run on a quad-core processor.

Other reports analyse that LG's main objective behind launching a full-HD smartphone in Q1 2013 is to be able to garner greater market share than its rivals. The company feels that having its product in the market before the Samsung Galaxy S IV or the next generation iPhone will give it a slight edge in terms of sales.