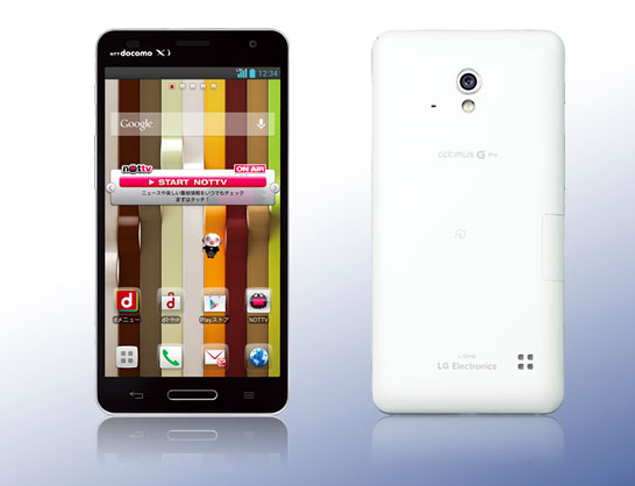 Japanese telecom giant NTT DoCoMo has officially announced the LG Optimus G Pro smartphone as the company's next flagship device. The smartphone launched as part of the company's Spring 2013 line-up will be available in Japan, starting April. Launch details for other countries remains unknown as of now.

The specifications of the device are pretty much in line with what we reported a day ago, courtesy an online slide leak featuring the device.

Under its belly, the smartphone is powered by a snappier 1.7GHz quad-core Qualcomm Snapdragon S4 Pro processor with 2GB RAM. It has internal storage of 32GB with microSDXC expansion support, LTE support and comes with a 3,000mAh battery.

The new smartphone will compete in the same league as the recently launched Sony Xperia Z (and ZL), Huawei Ascend D2 and the unannounced HTC M7, and Samsung's Galaxy S IV.

LG's Optimus G seems to be doing pretty well with company recently revealing that it sold 1 million units since its debut a couple of months ago as reported by Yonhap News Agency.

Recent rumours suggest LG is planning to launch another full-HD smartphone in the first quarter of 2013. Codenamed 'GK', the device is expected to feature a 5.5-inch screen and run on a quad-core processor.