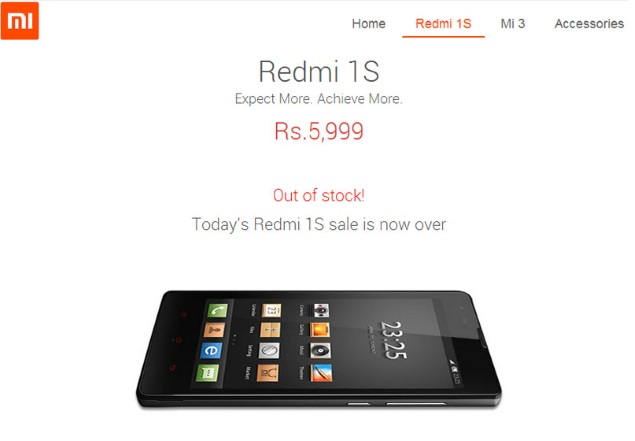 Another Xiaomi flash sale has just concluded, this time for the newly-launched Redmi 1S budget smartphone, and it shares several characteristics from Mi 3 sales. Once again, Flipkart's entire inventory went out of stock within seconds, and once again, there are thousands of unhappy consumers bemoaning their tardiness.

The Chinese smartphone manufacturer, also known as 'China's Apple', has enjoyed much success in India with its flash sale model in the past, selling over 95,000 Mi 3 smartphones since its launch in late-July.The speed of the flash sales has left a lot of users quite unhappy, and Tuesday's flash sale for the Redmi 1S is no different - with 40,000 units going out-of-stock in 4.2 seconds, a rate that is similar to the Mi 3's last few flash sales that saw 20,000 units going out of stock in under 3 seconds.Several interested consumers have expressed their disbelief and unhappiness with the whole process on Twitter, and many have responded to Barra's tweet about the speed of the Redmi 1S sale.

@hbarra @Flipkart @MiIndiaOfficial No Way! It wasn't there for even half a second. Something wrong with timer.

@hbarra @Flipkart @MiIndiaOfficial and unsatisfied prospective customers who are right now cursing your company must be an acheivement ???

Several of our readers also commented on the speed of the Redmi 1S sale, venting their ire on our Tuesday post reminding readers of the sale. Reader Samir Singhal commented, "Fake sale within 1 second Redmi 1S was out of stock . It was already sold before 2 pm . FlipKart is making fool to the customers. Just in one second all phone was sold . How it can be possible. This sale is totally fake. I click exactly on 2 pm and it showed out of stock. All nonsense deal."

Reader Nikhil echoed Samir's thoughts, commenting, "Utter BS! I logged in at 1.55 pm today and the clock counter was running. The moment it was 00:00 i got the buy now option and immediately when i clicked it.. it said out of stock!! What is this? This is impossible considering 40000 units. I am 200% sure they didnt have this much of stock. I can only imagine what could have happened if i would have got it because if a company believes in giving misinformation and cheat its customers, they for sure wont last long. I aint buying Xiaomi anymore for sure. Consdering Moto or Asus now."

Of course, some users did manage to buy themselves a Redmi 1S on Tuesday's flash sale. The company had announced 40,000 units would be available in the first flash sale soon after the phone's launch in India. What do you think of Xiaomi's flash sale model in India? Do let us know in the comments.

If you are wondering what all the fuss is about, refer to our review of the Redmi 1S to see if it really is the smartphone for you. We found that the Redmi 1S in several aspects surpassed many more expensive smartphones in the market, due to its reliable performance, great camera, crisp screen and excellent battery life at a Rs. 5,999 price point. The only major drawback we see is the lack of Android 4.4 KitKat at the moment - however Xiaomi had at launch announced it will receive MIUI v6 with Android 4.4 KitKat before the end of the year. Notably, we did not compare the phone extensively with the Moto G (Review | Pictures), as the successor of the popular smartphone is expected to launch soon.