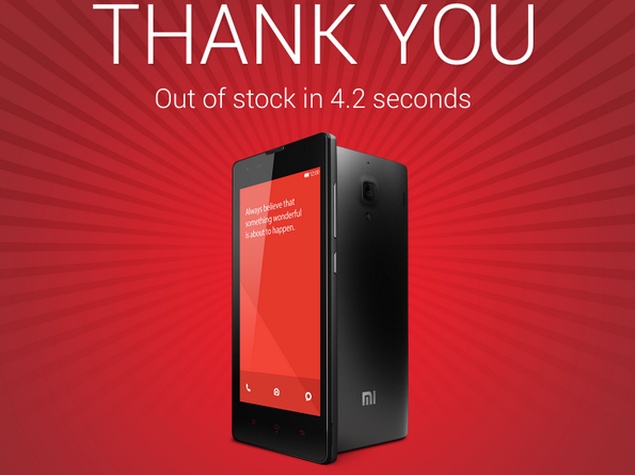 Xiaomi's budget smartphone, the Redmi 1S, went on its sixth flash sale on Flipkartin India on Tuesday, and this time it just took just 4.2 seconds for 1,00,000 units to be listed as 'out of stock'.The company posted the latest flash sale figures on Twitter via its MiIndiaOfficial handle.

Thank you for your continuous support. <3 pic.twitter.com/moSvJp2ocZ

Interestingly, this was the first flash sale that saw up to 1,00,000 Redmi 1S units going on sale, an increase of 40,000 units compared to last two flash sales which saw 60,000 being made available.

Flipkart, the exclusive online retailer of Xiaomi handsets in India, claimed that over 2,00,000 people were registered for the sixth flash sale of the Redmi 1S, which is priced at Rs. 5,999.

Considering that limited stocks of the Redmi 1S (Review | Pictures) would be available in India, the popular e-commerce giant had revealed that it would limit orders to one phone per registered email ID per sale.

Flipkart has updated its Mi page to say the next Redmi 1S sale is on October 21, and that registration will begin from Tuesday at 6pm IST. For now, the number smartphones that will be made available has not been revealed.