Redmi Note 6 Pro vs ZenFone Max Pro M2: Which One Should You Buy? 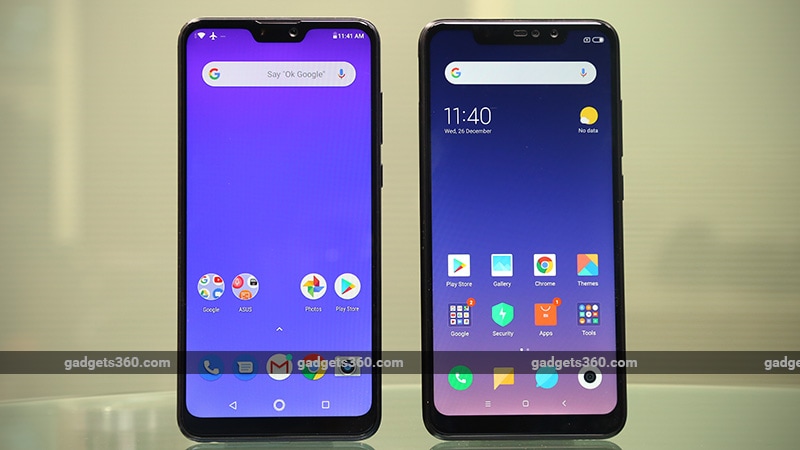 ZenFone Max Pro M2 (left) and Redmi Note 6 Pro go head to head but who wins? Read on to find out

Redmi Note 5 Pro and ZenFone Max Pro M1 were 2018's two most popular phones in the budget segment, and it's time we take a close look at their successors - the Redmi Note 6 Pro and the ZenFone Max Pro M2. Both their predecessors offered astounding price-to-performance ratios at their launch. Now, the newer models feature more modern designs and hardware upgrades, but will they be able to capture the hearts of consumers? We compare the two new models from Xiaomi and

Asus has stepped up the processor wars with a Qualcomm Snapdragon 660 SoC in the ZenFone Max Pro M2, while Xiaomi has retained the tried-and-tested Snapdragon 636. Does that give Asus a clear advantage over Xiaomi's budget performer, or does the Redmi Note 6 Pro have a few hidden tricks of its own to help it come out on top?

We pit the Xiaomi Redmi Note 6 Pro and Asus ZenFone Max Pro M2 against each other to answer that question.

Both phones are near identically sized, with the Redmi Note 6 Pro (Review) being broader by just a millimetre. The screens on both devices are slightly raised, though the one on the ZenFone Max Pro M2 (Review) sits better in its frame than the one on Redmi Note 6 Pro, which does feel noticeably rough around the edges. Asus also has a more premium-looking device with its glossy back panel, metal rim around the dual-camera module, and the chamfered ring around the fingerprint sensor.

The Redmi Note 6 Pro in comparison is quite understated with its simplistic, single-coloured metal backplate. Its dual-camera module also has a metal rim, which should be useful considering that it sticks out quite a bit. This should not be much of an issue though, since the phone comes with a bundled case.

The back of the ZenFone Max Pro M2 is highly susceptible to smudges and we found ourselves cleaning the device quite frequently when using it without a case. Despite its tall body, the phone fit comfortably in our pockets and feels light at 175g.

The Redmi Note 6 Pro is also prone to smudges, though not nearly as much. Being around the same dimensions and weight, it was equally comfortable to hold and use.

Both phones have notched displays. The one on the Redmi Note 6 Pro is wider as it houses dual front-facing cameras along with an array of sensors, a notification LED, and the earpiece.

The notch on the ZenFone Max Pro M2 is comparatively smaller with just the single front camera and sensors. The earpiece and notification LED are placed above the notch, which helps keep it narrow.

Both phones have volume and power buttons on the right. The power buttons on both the ZenFone Max Pro M2 and Redmi Note 6 Pro are easy to reach, but the volume controls are a little too high to be comfortably reachable when using these phones with one hand. On the left are the dual-SIM trays, again identically placed on both phones.

The Asus ZenFone Max Pro M2 offers a dedicated slot for microSD cards, while the Redmi Note 6 Pro has a hybrid dual-SIM tray that makes you choose between a second SIM and expandable storage.

When it comes to looks, the ZenFone Max Pro M2 does have an advantage. It looks more premium despite its fingerprint-magnet back panel, and it also manages to keep the weight down despite having a bigger battery than the Redmi Note 6 Pro.

The Asus ZenFone Max Pro M2 runs stock Android 8.1 Oreo, while the Redmi Note 6 Pro has MIUI 10 on top of Android 8.1. Both devices were running the October 2018 security patch at the time of writing this article.

Xiaomi has stuck with the Qualcomm Snapdragon 636 SoC for the Redmi Note 6 Pro. This is the same processor that was used on the Redmi Note 5 Pro. It has eight Kryo 260 CPU cores clocked at 1.8GHz, split up into four ‘performance' cores and four ‘efficiency' cores. There are two RAM variants – 4GB and 6GB – both with 64GB of storage. An additional 256GB of storage can be added using a microSD card. The 4GB RAM variant is priced at Rs. 13,999, while the 6GB RAM option costs Rs. 15,999.

Both phones have similar 6.26-inch displays with full-HD+ (1080x2280 pixels) resolutions and a 19:9 aspect ratio. We found that the display of the Redmi Note 6 Pro had more natural colours and better quality overall than the oversaturated ZenFone Max Pro M2. Though the latter makes colours appear punchier, the oversaturation often consumes details when viewing images or watching videos on the device. Both screens are quite bright though, and are visible under direct sunlight.

Despite their different SoCs, both phones are highly capable in terms of everyday use. We didn't notice any issues when performing everyday tasks such as Web browsing or using social media, office productivity, or service-based apps. Performance was lag-free all throughout.

A few of our benchmarks tests did not work on the ZenFone Max Pro M2 unit. We initially thought this was Asus' attempt to keep performance scores from leaking prior to the device's official launch, but now, post launch, we're still facing the same issue. While AnTuTu failed to run, we did manage to run Geekbench 4, which returned 1,483 and 5,520 points in the single-core and multi-core tests respectively. GFXBench gave us a score of 42fps in the T-Rex test, 12fps in Manhattan 3.1, and 7.6fps in Car Chase.

In comparison the Redmi Note 6 Pro scored 1,331 and 4,860 respectively in Geekbench 4's single-core and multi-core tests. This phone managed 34fps, 9.7fps and 5.9fps in the T-Rex, Manhattan 3.1, and Car Chase tests respectively in GFXBench.

These results put the ZenFone Max Pro M2 ahead of the Redmi Note 6 Pro in terms of raw performance.

PUBG Mobile ran at the lowest quality settings on the Redmi Note 6 Pro, though gameplay was quite smooth. On the ZenFone Max Pro M2, the game ran without stutter as well, but at the Balanced graphics setting, with the frame rate set at Medium.

The fingerprint sensors on both devices are quick, but we found that the Redmi was more accurate and slightly faster than ZenFone. The Max Pro M2 however has face recognition that worked better under all lighting conditions.

The UIs of both devices feel fast and snappy. Xiaomi's MIUI might not be our preferred option, but it is popular with many Xiaomi fans who prefer it over the stock Android experience. It is feature-rich, with its array of native apps such as Mi Drop, Cleaner, Mi Remote, Dailyhunt, Mi Video, Mi Community, and the Mi Store. Xiaomi even preinstalls a number of third-party apps, namely UC Browser and Amazon, plus of course Google's entire suite.

On the flip side, we do get spam notifications regularly from Dailyhunt and Mi Video. There's no app drawer, and all the apps you install will be accessible directly from the home screens. There is theme support as well – both free and paid – so you always have the option to restyle the interface whenever you feel like it.

Asus has kept things simple on the ZenFone Max Pro M2 by going with near-stock Android. There are a few customisations such as ZenMotion gestures, which let you double-tap the screen to wake the device or put it to sleep, and a Smart Screen On setting that keeps the screen on for as long as you're looking at it. Though Facebook, Messenger, and Instagram are preinstalled, they can be uninstalled. There are also a few apps added by Asus: Calculator, Voice Recorder, and FM radio, which we found useful.

The Redmi Note 6 Pro has the same 4000mAh battery as the Redmi Note 5 Pro, while the Max Pro M2 has a bigger 5000mAh unit. In our HD video loop test, the Redmi went on for 15 hours and 36 minutes, which was understandably less than the 17 hours and 58 minutes that we got from the ZenFone.

Both phones lasted easily a full day of heavy use, that included a mix of gaming, photography, around 30 minutes of Google Maps and two chat apps running simultaneously - Telegram and WhatsApp. The ZenFone Max Pro 2 ended the day with 45 percent still in the tank, while the Redmi Note 6 Pro had little over 25 percent within the same period.

For an average user, the ZenFone Max Pro 2 should last two days, with the Redmi Note 6 Pro lasting a little over a day, so it's advantage Asus in that department.

The Redmi Note 6 Pro camera app has an AI scene detection mode. Xiaomi claims that its app is capable of recognising 32 scenes with the rear cameras and 12 scenes with the front ones, using AI. The ZenFone Max Pro M2 doesn't have an AI camera mode, but it does have numerous toggles and modes for shooting. At the time of our review we had mentioned that Asus had promised an update in December to enable AI scene detection, EIS, and a Depth Effect mode with the front camera.

The cameras on both phones seemed equally capable in our tests with only some minor differences that set them apart. We noticed that the shots produced from the Redmi had a slightly greenish tone to them, while the ZenFone edged more towards a magenta tone. Besides that, the ZenFone also produced more vivid images that sometimes came at the cost of details, while the Redmi was slightly better with details and reproduced more natural colour tones.

In low-light shots, the two phones produced very similar results. The ZenFone Max Pro M2 came out a bit short due to its noise reduction, which resulted in artefacts in darker areas of images. The Redmi Note 6 Pro's night shots were comparatively noisier, but more natural-looking at full zoom.

When it comes to recording video, the ZenFone Max Pro M2 has an advantage with better image stabilisation than the Redmi Note 6 Pro. The ZenFone can also shoot at 4K, while the Redmi is limited to a maximum video resolution of 1080p.

Verdict
The Asus ZenFone Max Pro M2 outperforms the Redmi Note 6 Pro in almost every aspect. Its faster processor delivers better performance overall, not only in benchmarks but also in real-world tests. Its near-stock Android interface is cleaner, comes with less bloatware, and has a few useful additions.

Looks can be subjective, but to us, the ZenFone comes out ahead in that department as well. It offers battery life as well, though Xiaomi's offering will also easily last you a full day.

The Redmi Note 6 Pro's MIUI has a lot of interesting customisations, but that comes at the cost of bloatware and spammy notifications. It does offer slightly better camera performance than the ZenFone Max Pro M2, though the gap isn't huge by any means.

Even though the prices of the Asus ZenFone Max Pro M2 models are set at Rs. 1,000 higher than the equivalent Redmi Note 6 Pro variants, Asus has an edge over Xiaomi. However, if camera quality is a higher priority for you, you can go for the Redmi Note 6 Pro instead, and you'll still end up with a pretty competent phone.

Is Asus ZenFone Max M2 the best phone under Rs. 10,000? We discussed this on Orbital, our weekly technology podcast, which you can subscribe to via Apple Podcasts or RSS, download the episode, or just hit the play button below.