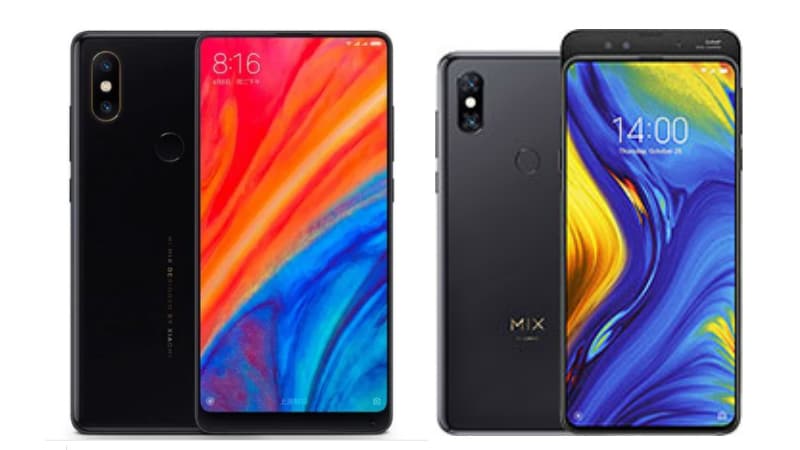 After unveiling the Mi Mix 2S in March, Xiaomi has decided to unveil its successor Mi Mix 3 in China this month. The smartphone comes with design upgrades like the front magnetic camera slider, and a no-notch no-chin display. The Mi Mix 2S, in comparison, has a slight chin at the bottom for housing all the sensors and the front camera as well. The successor also comes with up to 10GB of RAM, while the latter offers a maximum of up to 8GB RAM. We pit the Mi Mix 3 with the Mi Mix 2S to see if the new phone is a worthy upgrade from its predecessor, at least on paper.

Both the phones come with a rear fingerprint scanner, a vertically stacked dual camera setup, and MIUI 10 software. The successor sports a larger 6.39-inch display thanks to its true bezel-less screen, while the Mi Mix 2S sports a 5.99-inch display. Both the phones sport 1080p resolution. The two phones are powered by the Snapdragon 845 processor, and RAM options for the Mi Mix 3S go up to 10GB. The maximum RAM offered by the Mi Mix 2S is up to 8GB.

The biggest different is the placement of the front camera - with the Mi Mix 2S housing it at the bottom chin of the display, while the Mi Mix 3 hides it underneath the display, and it can be removed with a magnetic manual slider. Optics on the Mi Mix 3 include dual camera setup at the front and back - with two 12-megapixel wide-angle and telephoto lenses at the back. The wide-angle lens features an f/1.8 aperture and the telephoto lens features a an f/2.4 aperture. Other features include dual-LED flash, OIS, optical zoom, AI background music, 960fps slow-motion, AI scene detection, AI bokeh, AI studio, and AI scene detection. At the front, there is one 24-megapixel (Sony IMX576 sensor) with 1.8-micron pixels, and a secondary 2-megapixel sensor with selfie light support. The front camera also offers AI features, including beautification and Bokeh effects.

Comparatively, the Mi Mix 2S also has a dual rear camera setup with two 12-megapixel sensors - of one which features an f/1.8 aperture, wide-angle lens, and four-axis OIS, while the other one has an f/2.4 aperture and a telephoto lens on top. The setup offers optical zoom and supports AI-based scene recognition features. On the front, there is a 5-megapixel sensor with HDR and Face Unlock support. Xiaomi has also provided AI-based beautification features. The Mi Mix 3 packs a 3,850mAh battery, and the Mi Mix 2S packs a smaller 3,400mAh battery. Both the phones support Bluetooth v5.0.