Xiaomi Mi A2 vs Redmi Note 5 Pro: Which One's Best Suited to Your Needs? 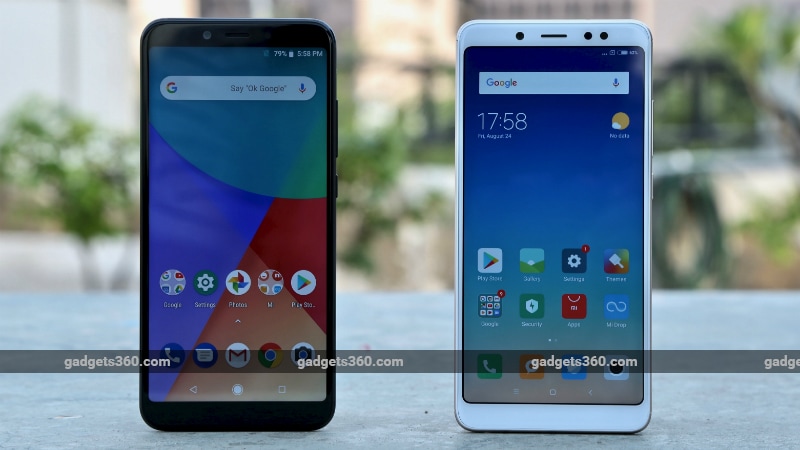 Xiaomi recently launched the Mi A2 (Review), the successor to the Mi A1 (Review), which was the first Xiaomi smartphone to run a stock build of Android and was well received by buyers and critics alike. The new Mi A2 is also an Android One smartphone that features 4GB of RAM, the Qualcomm Snapdragon 660 processor, an all-metal body, and a dual camera setup at the rear.

Priced at Rs. 16,999, the Mi A2 competes with Xiaomi's own Redmi Note 5 Pro (Review), which starts at Rs. 14,999 and has long been the segment benchmark. With MIUI, it offers nifty features such as Dual Apps and Second Space, and the specifications are nothing to scoff at either. We spent some time comparing the two smartphones in detail, and here is what we found.

Made out of aluminium, both phones feel reassuringly solid in the hand. They are a bit too tall to be used comfortably with one hand, though. The Mi A2 is extremely slippery and the back attracts a lot of fingerprints. The Redmi Note 5 Pro's rear panel does not pick up fingerprints thanks to its matte finish.

The camera unit on the Redmi Note 5 Pro juts out a fair bit from the chassis, but the one on the Mi A2 protrudes even more, making it impossible to use on a desk or a flat surface. Button placement is identical on the two phones. The power and volume buttons — which are placed on the right edge — are tactile, but a bit too small for our liking.

Xiaomi Mi A2 vs Redmi Note 5 Pro specifications and displays

Just like its predecessor, the Mi A2 is an Android One smartphone with a focus on clean, fluid software, and timely updates. This time around, Xiaomi has omitted a few key features, such as the headphone jack and a microSD slot for expandable storage. In comparison, the Redmi Note 5 Pro retains the legacy port and has a hybrid dual-SIM tray that lets you expand storage by up to 256GB.

Both phones have 5.99-inch full-HD+ displays with 18:9 aspect ratios and no notches, which we like. The screens on both smartphones are quite reflective, which impacts outdoor legibility. The colour temperature on the Mi A2 is much warmer and the colours are slightly more vivid. The Redmi Note 5 Pro's display gets brighter but looks slightly dull in comparison.

The Xiaomi Mi A2 is a part of the Android One initiative, which means it runs a stock build of Android 8.1 Oreo with the August security patch at the time of writing this article. With the Mi A2, you can expect timely Android version updates as well as security patches.

The software is fluid and devoid of any third-party bloat. There are a few preinstalled Mi branded applications called like Mi Drop, Mi Community, Mi Store, and File Manager. The Redmi Note 5 Pro in comparison runs a heavily skinned version of Android 8.1 Oreo. MIUI 9.5 is loaded with useful features like a one-handed mode, a powerful theming engine, and Dual Apps, which lets you run a second instance of any app with a second account. However, the experience is not as clean as stock Android, with a confused and cluttered Settings menu.

Charging is slow on both smartphones as they ship with standard 10W chargers. Both do support quick charging - the Mi A2 boasts of Quick Charge 4+ technology and the Note 5 Pro features Quick Charge 2.0 - but you will have to buy a compatible charger to take advantage of these features.

The Mi A2 has a distinct edge when it comes to outdoor shots. Its rear camera has better dynamic range and captures more detail than the one on the Redmi Note 5 Pro. The colours are more accurate on the Mi A2 and the Redmi Note 5 Pro has a tendency to blow out the highlights.

Both phones allow you to take portrait shots with the front camera, and there is very little to distinguish between the two. The beauty mode on the Mi A2 is undeniably superior, while the Redmi Note 5 Pro excessively whitens faces. Video recording maxes out at 1080p for the Redmi Note 5 Pro while the Mi A2 can go up to 4K. Videos taken by both smartphones during the day or at night are decent at best.

Verdict
The Xiaomi Mi A2 (Review) offers a cleaner software package, the promise of timely updates, a brighter and punchier display, and a better rear camera setup. If you can live without the headphone jack and microSD slot, the Mi A2 is more modern and a better package overall.

However, the Redmi Note 5 Pro (Review) still has some tricks up its sleeve. It retains essentials like expandable storage and the legacy 3.5mm jack, has similar performance in day-to-day use, and undercuts the Mi A2 in price by Rs. 2,000. Its battery life is also a lot better. Availability is another area where the Redmi Note 5 Pro edges out the Mi A2. While Xiaomi struggled to meet demand for the Redmi Note 5 Pro initially, it is now readily available on the company's official website. The Mi A2 in comparison is currently being sold only via flash sales.