Why you probably shouldn't buy the Samsung Galaxy S5 at launch 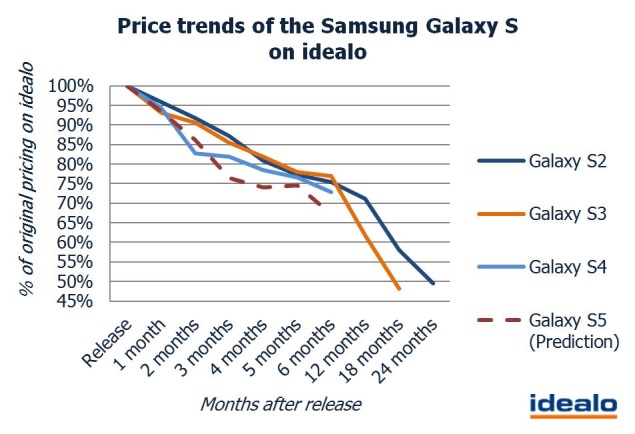 Samsung is expected to lift the curtains off its next flagship device, the Galaxy S5, at the unPacked event in Barcelona later this month. While Samsung may not have revealed specifications or price of the phone yet, a company is already predicting a significant price drop within three months.

UK-based price comparison site Idealo has analysed the price trends of the last three flagship Samsung Galaxy smartphones to predict that that Samsung Galaxy S5's price will fall by 24 percent after 3 months of its release.

Idealo in a report analysed the UK price trend for Samsung's previous flagships (Galaxy S II, Galaxy S III and Galaxy S4) and found out that the price decline particularly in the first quarter is considerable.

Notably, the Samsung Galaxy S4 was launched at a price of Rs. 41,500, while the price did fall later and it is now available at Rs. 32,500 in the Indian market.

Idealo shared details about the methodology used for its analysis:

The price data in the study is based on the click rates on idealo. Every time that a users clicks on a product, the current price is recorded. Using each saved click in a month, idealo has calculated the average price of the Galaxy models S2, S3 and S4. As idealo users tend to click on offers for low-end devices, the average price is based on the 16 GB entry-level model.

Recent reports have indicated that Samsung's unPacked 5 event, which is expected to see the next Galaxy flagship smartphone launched, will be a low-key event. An earlier report on Thursday suggested that the Samsung Galaxy S5 will be joined by a new tablet series, believed to be dubbed Galaxy Tab 4 and the long-rumoured Galaxy Gear successor, named Galaxy Gear 2.