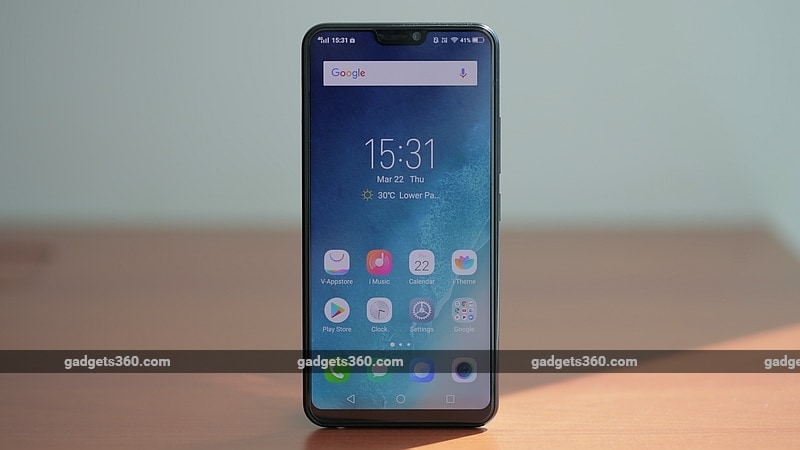 Welcome back to our weekly recap of news you can use from the world of tech. This week, one of the highlights was the India launch of the Vivo V9, priced at Rs. 22,990. The phone was first launched in Thailand and the Philippines, and then launched in India a day later. The Vivo V9 is the latest in a line of Android phones that have a notch on an otherwise bezel-less display, similar to the iPhone X.

The Vivo V9 is being sold in just one configuration in India, packing a 24-megapixel front camera, 4GB RAM, and 64GB internal storage. It has a 6.3-inch display with a 19:9 aspect ratio, and dual cameras on the back with a primary 16-megapixel sensor and a secondary 5-megapixel sensor. It also has a 3260mAh battery.

Vivo is the first Android phone manufacturer to bring a phone with notch to India, but Asus has already unveiled phones like ZenFone 5 and ZenFone 5z, which will launch in India at some point. A similar selfie smartphone is set to launch on Monday - the Oppo F7 - once again featuring the iPhone X-style notch.

Back to the Vivo V9, and our first impressions of the phone were generally positive, though we felt that the fingerprint sensor was too high, and although face recognition worked quickly, it often required multiple attempts. In use, we didn't notice any lag, and the phone was quick to load apps, with no trouble multitasking. Stay tuned to Gadgets 360 for a detailed review of the Vivo V9.

Another phone that's been in the news is the Redmi 5 - the phone launched last week in India, and went on sale for the first time this week. The Chinese company also announced that there will be 4 lakh units of the phone available in this first sale, but on both Amazon and Mi.com, the Redmi 5 promptly went out of stock.

Our review of the phone will follow soon, but in our first impressions, we noted its similarity to the Redmi Note 5 (Review), although it packs a smaller screen. The front of the phone has no physical buttons, with the home, overview, and back keys now being on-screen. Thanks to the smaller size phone, the fingerprint sensor is easy to reach, and the Redmi 5 feels responsive to use.

The Redmi 5 is running on MIUI 9, but the latest version of Xiaomi's take on Android, MIUI 9.5, has been officially announced. It's coming to 30 smartphones from the company, including older phones like the Mi 3 and the Redmi 3. The update has already started rolling out over-the-air for some phones, but it will take place in a staggered manner, going on till late April. The update is said to bring the February security patch, Notification Shade, and quick reply feature.

With the launch of the OnePlus 6 drawing nearer, it's no surprise that leaks are getting more and more detailed. Near the start of the week, we got a look at the Oppo R15 and Oppo R15 Dream Mirror Edition, which most expect will serve as a template for the OnePlus 6. OnePlus has often sourced designs from Oppo in the past, for instance, the OnePlus 5T and the Oppo R11s are almost identical. With this in mind, OnePlus fans can look forward to an iPhone X-like notch, 19:9 display aspect ratio, and an under-display fingerprint sensor with the OnePlus 6.

But that's still speculation. However, a leaked specification sheet gave us some more details, including a large 3450mAh battery. The OnePlus 6 will apparently have a similar rear camera setup to the OnePlus 5T, and a 6.28-inch full-HD+ 19:9 display, with a 20-megapixel selfie camera. It's said to be powered by a 2.7GHz Qualcomm Snapdragon 845 SoC, 6GB of RAM, and will have 128GB storage.

There was one more leak about the OnePlus 6, suggesting that it will be the most expensive phone from the company so far - if by a mall margin. According to the leak, the top end model of the phone will go for CAD 749, obviously in Canada. That is roughly $575 in the US, which is a little bit higher than the $559 price tag of the OnePlus 5T 8GB variant in the US. Now, $575 is roughly Rs. 38,000, but India pricing would be a little higher to reflect customs and taxes, which makes sense, as the OnePlus 5T 8GB model is sold for Rs. 37,999 right now.

OnePlus 6 Price, Specifications, Features, and Everything Else We Know So Far

Meanwhile, one of the biggest developments in the sphere of privacy is the Cambridge Analytica scandal that has a lot of people at Facebook worried right now. It's a complicated issue, which raises concerns about data privacy, but also about political manipulation. Very simply, Cambridge Analytica is a firm that harvested the private data of over 50 million Facebook users, without permission, and then used it to target the delivery of political messages in President Donald Trump's election campaign. Although it is in the news right now because of its involvement in US politics, Cambridge Analytica's "psychometric" profiling has also allegedly seen use by a number of Indian political parties.

The company harvested data from a "personality quiz" shared on the social network, and it could scrape the details not just of the quiz takers, but also all of their friends. This has quickly blown up to become a bigger conversation about security and the kind of data that's easily available about us, and a Facebook data dump showed people's personal call logs and other data that advertisers can access. This pushed a campaign to get people to delete their Facebook accounts. Brian Acton, co-founder of (Facebook-owned) WhatsApp was one of the people calling for deleting Facebook, and it's call to action that got Elon Musk to delete the Facebook pages of SpaceX and Tesla.

Social Media Has Become Toxic and Lost All Sense and Purpose

Last week, Fortnite Battle Royale made its way to mobiles with a trailer on the iPhone X. We got to try it out soon after and found it very stable, though aiming could be improved. Now, the original Battle Royale game, PUBG has also released on Android and iOS, and is ready to download. The game launched in India, the US, and other regions, and runs on Unreal Engine 4. It supports 100 players just like the PC version, and has in-game voice chat. The recommended hardware is an iPhone 6 or above, and Android 5.1.1 and at least 2GB RAM, which is not actually asking for too much.

Not to be left behind, Fortnite invite codes for iOS also became available this week - you can only get the game via an invite, but now Fortnite iOS players can send out invites to their friends. Within four days of launch, the game has already grossed over $1.5 million (around Rs. 9.7 crore) worldwide, and the game hasn't even released on Android yet. This might slow down now that PUBG is also in the picture though. Between the two games, which one is better? Fortnite has the better control scheme, but Android gamers can only play PUBG for now, and both are free to download so there's nothing to lose in trying them and seeing which one you like more, although for now, our pick would be Fortnite.

One of the grouses that people have had about Reliance Jio's smart-feature phone the Jio Phone is that it does not come with WhatsApp. But it might be getting the app soon if reports are to be believed. The phone runs on KaiOS, which doesn't support WhatsApp, and this has in the past prompted workarounds to get access to the popular messaging platform, such as using the browser testing tool Browserling (to the point of nearly taking it down).

However, WhatsApp has allegedly been working on a KaiOS version of the app, which will officially bring support for Jio Phone users. It should be noted that there has been no official announcement from neither WhatsApp nor Reliance Jio. However, KaiOS Technologies had already mentioned last month that it has partnered with many technology giants, most notably Facebook, Twitter, and Google. To recall, Jio Phone already has a special edition of the Google Assistant, so this isn't too far-fetched.

Speaking of Reliance Jio, the network has launched its newest JioFi 4G hotspot on Flipkart, priced at Rs. 999. It promises download speeds of up to 150Mbps, and upload speeds of up to 50Mbs, and connectivity to up to 32 devices at a time. The new JioFi also has a 3000mAh battery, compared to the previous version that had a 2300mAh battery.

The other telcos have launched new plans to take on the Jio challenge as well. Idea has launched a Rs. 998 pack, under which users get 5GB of data for 35 days. It also comes with an Idea Magic offer to give prepaid subscribers up to Rs. 3,300 of cashback for recharges through the Idea app and website. Airtel has a new Rs. 499 postpaid plan which offers unlimited voice calls, and 40GB data per billing cycle, with rollover for unused data. You also get a free year of Amazon Prime, a Wynk TV subscription, and handset damage protection. Vodafone on the other hand has a new Rs. 21 recharge that gives unlimited data - for one hour. If you need a lot of data for just a little while, it sounds like a great idea.

There were also a whole bunch of other launches this week. In China, we had the Huawei Nova 3e, which is essentially a variant of the Huawei P20 Lite that was launched in Poland and Czech Republic last week. The China launch comes with a price tag of CNY 1,999 (roughly Rs. 20,600). Also in China, the Meizu E3 was launched starting at CNY 1,799 (roughly Rs. 18,500), with 6GB RAM, a 5.99-inch full-HD+ display, and 64GB storage. Japanese electronics giant Sharp announced the launch of the Sharp Aquos S3 Mini in China. The budget Aquos S3 Mini has a rather unusual 17:9 aspect ratio display with a front-facing notch like the Essential Phone, and also comes with 6GB of RAM, and 64GB storage. It's priced at CNY 1,600 (roughly Rs. 16,500).

Finally, we also saw the launch of the Lava Z50, India's first Android Oreo (Go edition) smartphone. The phone comes with an effective price of Rs. 2,400, as Airtel is offering cashbacks of Rs. 2,000 - customers will have to recharge their Airtel accounts with a minimum amount of Rs. 3,500 for the first 18 months, and another Rs. 3,500 for the period of 19-36 months from the purchase to get the cashback.

OnePlus 5T Goes Out of Stock in North America, Fans Will Now Have to Wait for OnePlus 6
Government Sends Notice to Cambridge Analytica Over Indian Users' Data