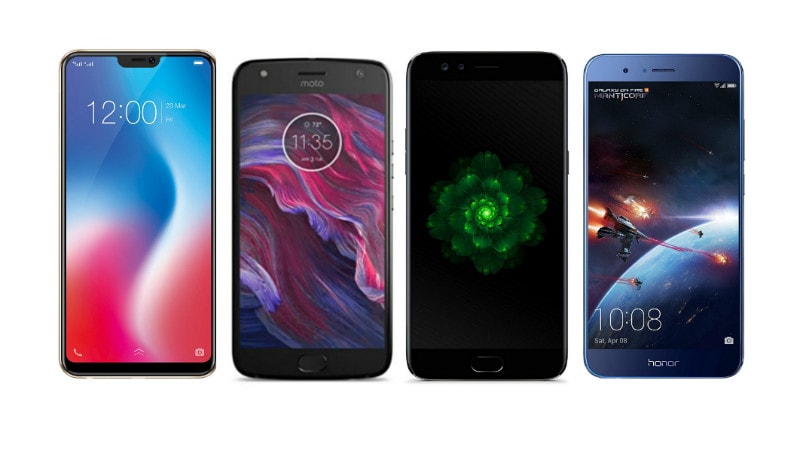 Vivo V9 became official last week, complete with a large bezel-less display, notch design, and 24-megapixel camera. The new Vivo V9, in fact, looks a lot like the premium iPhone X what with the notch that houses the selfie camera setup. There's also AI integration for photos in both the back and the front cameras, as well as the latest version of Android baked in. With the Vivo V9 price in India below Rs. 25,000, it looks like buyers have yet another competitive smartphone that doesn't break the bank to choose in the market. However, it may find a little competition the market, as smartphones like Moto X4, Oppo F3 Plus, and Honor 8 Pro are priced similar to the Vivo V9, but come with more RAM and storage, and some other differentiators. We take a look at the differences between the four models to help lessen the confusion regarding which one suits your requirements the best.

Vivo V9 price in India is set at Rs. 22,990. For its purchase, pre-orders are already live on Amazon, Flipkart, Paytm, and Vivo E-Store and those who pre-order the handset before April 2 will get one-time screen replacement warranty. The company has also promised to offer an additional discount of Rs. 2,000 and no-cost EMI options. Further, Paytm is giving a cashback worth Rs. 2,299 on using the promocode 'VIVOV9', while Amazon is giving a five percent cashback in the form of Amazon Pay balance. The Vivo E-Store and Amazon are also set to offer couple movie tickets from BookMyShow. The handset will be available for purchase starting April 2, and its sale will live through online as well as offline channels in the country on the same date.

The dual-SIM (Micro+Nano) Vivo V9 runs Android 8.1 Oreo-based Funtouch OS 4.0 and features a 6.3-inch full-HD+ (1080x2280 pixels) IPS 'FullView Display 2.0' panel that has 19:9 aspect ratio. There is a Qualcomm Snapdragon 626 SoC, paired with 4GB of DDR3 RAM. The smartphone has a dual rear camera setup with a primary 16-megapixel sensor and a secondary 5-megapixel sensor, coupled with f/2.0 and f/2.4 aperture lenses, respectively. On the front, there is a 24-megapixel selfie camera with an f/2.0 aperture. The company has provided AI-based Face Beauty app for selfie and video call beautification and AR Stickers support. Furthermore, there is an Ultra-HDR mode and Portrait lighting effect as well as Bokeh depth-of-field effect.

For storing content, the Vivo V9 has 64GB of onboard storage that is expandable via a dedicated microSD card (up to 256GB). The smartphone has 4G VoLTE, dual-band Wi-Fi, Bluetooth v4.2, GPS/ A-GPS, Micro-USB, and a 3.5mm headphone jack. Sensors on board include an accelerometer, ambient light sensor, and a proximity sensor. The smartphone also has a Face Access 2.0 to enable a facial recognition feature to unlock the device and apps using your face. Besides, there is a 3260mAh battery, and the smartphone measures 154.81x75.03x7.99mm.

On the storage part, the Moto X4 has 64GB onboard storage option that is expandable via microSD card (up to 128GB). The smartphone has Wi-Fi, Bluetooth v5.0, GPS/ A-GPS, and USB Type-C in terms of connectivity. Further, it packs a 3000mAh battery that supports 15W TurboPower charger (bundled in the box) to enable fast charging. The handset measures 148.35x73.4x7.99mm and weighs 163 grams.

Unlike the Moto X4, the Android Marshmallow-based Oppo F3 Plus has a 6-inch full-HD (1080x1920 pixels) display and comes with an octa-core Qualcomm Snapdragon 653 SoC, coupled with 4GB of RAM. The handset has a 16-megapixel rear camera sensor with an LED flash and a dual camera setup on the front with a combination of a 16-megapixel primary camera sensor and an 8-megapixel secondary sensor.

The Oppo F3 Plus has 64GB of internal storage that is expandable via microSD card (up to 256GB) with a dedicated slot. Lastly, the smartphone has Wi-Fi, Bluetooth v.4.10, GPS/ A-GPS, and Micro-USB port and packs a 4000mAh battery with Oppo's proprietary VOOC Charging technology.

The Honor 8 Pro, on the other side, debuted with Android 7.0 Nougat-based EMUI 5.1, though it is upgradable to Android 8.0 Oreo-powered EMUI 8.0. The smartphone has a 5.7-inch QHD (1440x2560 pixels) LTPS LCD panel with Corning Gorilla Glass 3 protection and is powered by a HiSilicon Kirin 960 SoC, paired with 6GB of LPDDR4 RAM. It comes with a dual rear camera setup that comprises two 12-megapixel sensors with f/2.2 aperture, laser autofocus lens, LED flash, and 4K video recording support. The dual camera setup enables the handset to capture images in RGB as well monochrome. Also, an 8-megapixel camera sensor is featured on the front with a 77-degree wide-angle lens.