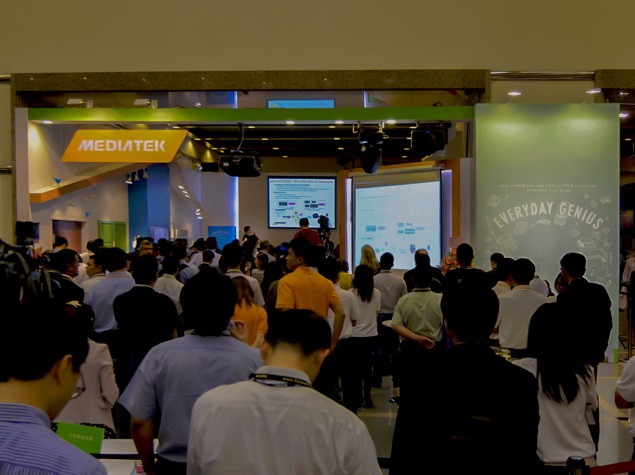 Chips from Taiwan's MediaTek Inc were mostly passed over by the big phone brands a decade ago, with the likes of Nokia and Motorola commanding legions of in-house engineers who could advise on electronics and circuitry.

Fast-forward to the age of the smartphone.

MediaTek pioneered bundling low-cost chips with recommendations on hardware such as lenses and speakers. This "system-on-chip" approach saves phone makers the cost of finding and testing parts to match the chips they buy. That in turn allows them to cut prices and, in the past year, seize 10 percentage points of market share from leader Samsung.

Thanks in large part to system-on-chip, the average price of a smartphone should fall to $267 by 2018 from $314 now, showed data from researcher IDC. That compared with a U.S. starting price of $749 for the latest Apple iPhone 6 Plus (Review | Pictures).

MediaTek says system-on-chip has won it the patronage of every phone brand bar Samsung and Apple. It helped low-priced smartphone maker Xiaomi Technology Co Ltd become the industry's No.3 in just three years, and is tipped for similar success with Google Inc's Android One in India.

"You can think about MediaTek as having a franchise business model, like McDonald's," Chief Financial Officer David Ku told Reuters. "McDonald's gives you all the equipment you need, and the initial cost for you is lower."

The strategy involves collaborating with almost 200 Chinese component makers and handset assemblers to supply MediaTek's smartphone customers with parts compatible with its chips.

MediaTek built up its supplier network in the feature phone era. At that time, it says, larger rivals sold chips to big phone makers which would employ thousands of engineers to find and test components such as screens for the chips to operate.

To differentiate, MediaTek began recommending hardware for its chips and targeting companies with limited means of sourcing and testing components independently. That lowered the barrier to enter the phone business, reduced costs and helped handsets reach the market quicker.

"The smartphone ecosystem compared with the feature phone ecosystem is very similar, if not the same," said Ku. "It's all well-connected pipes. It doesn't matter what product you pump in."

Fabless chipmaker
MediaTek adds reference designs to basic chip architecture, enabling components to work together. It contracts fabs - or chip factories - to make the chips, which it sells to phone makers along with a list of compatible sensors, microphones and other hardware.

It is the list that saves customers money, helping them make smartphones more affordable - particularly in emerging markets such as China, which accounts for 70 to 80 percent of MediaTek sales.

Thrifty handset buyers have helped MediaTek sales rise at least 40 percent each month this year, culminating in October's 56 percent. For the full year, it estimates sales of 350 million smartphone "chipsets" from just 10 million in 2011.

That would amount to 30 percent of the global market, showed Reuters calculations. Fubon Research analyst Carlos Peng estimated nearer 50 percent when excluding chipsets from the likes of Qualcomm Inc and Samsung that are primarily destined for high-priced smartphones.

MediaTek's sales spurt is largely due to "revolutionary" growth in the value of silicon per handset in function-heavy smartphones versus their far simpler feature phone predecessors, said analyst Rick Hsu at Daiwa Capital Markets in Taipei.

"It was a virtually 100 percent increase in silicon value," Hsu said. "It spurred demand for a lot of peripheral chips."

Growth is unlikely to be as marked in the ongoing transition to fourth-generation Long-Term Evolution (4G LTE) connectivity. MediaTek may even struggle with the emergence of 4G in China as it trails Qualcomm in the technology, analysts say.

"The first couple of years of LTE could be very much like the early days of 3G (in 2008-2010), or when MediaTek had to play 'catch-up'," Yuanta Securities analyst George Chang wrote in a research note. That "usually leads to pricing erosion."