The Most Notable Smartphones Of 2014 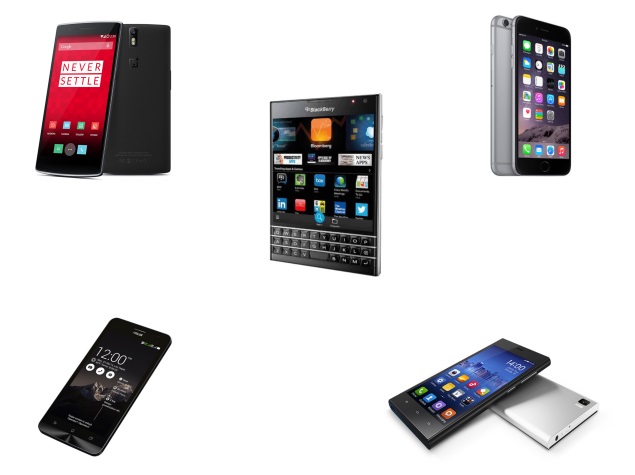 There have been hundreds of smartphone launches since January 2014, and as with all product categories, some have been more noteworthy than others. This year, we saw a lot of action especially in the budget space, with products launching at unbelievably low price points and changing all our expectations. At the other end of the spectrum, companies have also dutifully refreshed their flagships (sometimes more than once) and set new set of standards for top-end performance.

With so much activity, it was almost impossible to choose only ten phones for our list of the most notable phones of the year, but that's just what we've done. These cover the gamut from practical to gimmicky and budget-friendly to downright indulgent. Here are the 10 smartphones that made the biggest impact in 2014.

1. Sony Xperia Z3 Compact
In a sea of oversized smartphones, the Xperia Z3 Compact stands out, and it proves that you don't have to deal with a 5-inch (or bigger) screen if you want a powerful phone. With a great camera and battery life, this was perhaps our favourite Android smartphone of 2014.

2. iPhone 6 Plus
Not everyone will be pleased with this stretched-out iPhone, and even we had some concerns about its software. That aside, the iPhone 6 Plus (Review | Pictures) has perhaps the best camera of any smartphone we've tested this year, and its optical image stabilisation results in unbelievably good low-light performance.

3. Xiaomi Mi 3
Motorola and Asus set the stage for affordable smartphones, but Chinese smartphone brand Xiaomi redefined disruptive pricing with its flagship smartphone, the Mi 3. The Xiaomi Mi 3 (Review | Pictures) offered powerful specs at just Rs. 13,999, rivalling a few smartphones that cost more than twice as much. Xiaomi relied solely on word-of-mouth and social networking to promote these phones and still wound up causing virtual stampedes week after week.

4. Oneplus One
Nicknamed the "flagship killer", the OnePlus One (Review | Pictures) made a lot of noise when it launched in India. A lot of this was because Cyanogen OS, one of the device's USPs, would not be available in India. OnePlus is now working on its own Android fork based on Android 5.0 Lollipop. Adding to the frenzy, OnePlus launched the phone through a single e-commerce channel and in very limited quantities. We liked the OnePlus One and think that it gets really close to being a flagship killer, mostly thanks to its unbeatable price.

5. Blackberry Passport
Modelled around an actual Passport, the Blackberry Passport (Review | Pictures) smartphone had one of the most unique and distinct personalities of any phone we tested this year. The only problems we had with it were its bulkiness and inconsistent third-party app support in the Blackberry 10.3 OS. The conclusion of our review of the phone still sums up our feelings perfectly: "After many, many long years, BlackBerry might finally have done something completely right."

6. Motorola Moto E
At face value, the Motorola Moto E (Review | Pictures) might look like a normal smartphone with no noteworthy features. However, the Moto E was one of the most important releases in India this year because it ushered in a wave of budget smartphones with great performance. It can do a lot of things that only high-end smartphone could do before, and that too without breaking a sweat. Even so, the Moto E doesn't have a very good camera and the 'small' 4.3-inch screen might put off some prospective buyers.

7. Asus ZenFone 5: Asus has had a spotty history in the smartphone market but it is back full-strength now with the ZenFone series. All three siblings offer exceptional performance at their price points and are very easy to recommend. The ZenFone 5 (Review | Pictures) stands out in particular because of its good camera and smart positioning.

8. Samsung Galaxy Note 4
Of all the phablets we've reviewed, the Samsung Galaxy Note 4 (Review | Pictures) stands out thanks to its impressive combination of hardware and software. Samsung has really worked on ways to let users get more out of the big screen and stylus, going well beyond the capabilities of stock Android. Plus, the good camera and battery life make it an all-rounder.

9. Yota Devices Yotaphone
We have to give Yota Devices credit for thinking of something radically different, and the secondary e-ink screen is exactly that. In practical terms, the YotaPhone (Review | Pictures) is a bit too bulky and expensive, and not enough apps can take advantage of the e-ink screen. We hope the second-generation Yotaphone, already announced internationally, is an improvement.

These were the ten phones which made the strongest impression on us in 2014 - they aren't necessarily the best phones of the year, but in many ways, these handsets broke new ground, and helped make the year more interesting. Others that almost made the list include the Motorola Moto G (Review | Pictures) and the Xiaomi Redmi 1S (Review | Pictures).

Which were your favourite phones of 2014? Let us know via the comments.