Samsung's Galaxy Note 7 Crisis Is an Opportunity for Apple, Google 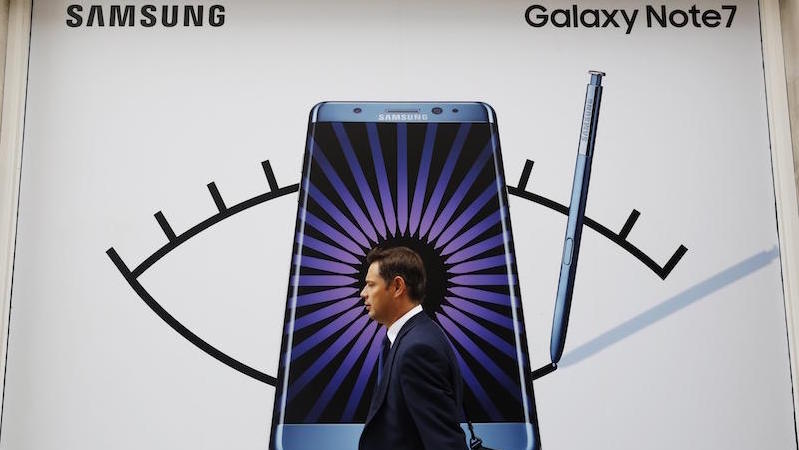 Samsung Electronics Co.'s mounting crisis with its flagship Galaxy Note 7 has left millions of premium smartphone buyers looking for an alternative. The obvious candidate is Apple's iPhone 7, but Google's slick new Pixel device could get a lift, too.

Samsung recalled and pledged to replace millions of Galaxy Note 7 phones in early September after reports that their batteries were bursting into flame. But over the past week, new reports have emerged that some replacement phones are catching on fire, too. Samsung has now asked retailers to stop selling all Galaxy Note 7 phones while the company and US officials investigate why the new batch of devices seem to be afflicted with the same problem.

Many people upgrade their phones during the Christmas shopping season, giving Apple and Google an opportunity to fill the Samsung vacuum - and making it even harder for the South Korean company to bounce back. The Pixel may be especially appealing to Samsung users looking for another device that runs the Android operating system.

"There's been a shift toward bigger screen devices, and there's less competition there given the Note 7 issue, so there's definitely more opportunities for the iPhone 7 Plus," said James Cordwell, an analyst at Atlantic Equities LLP. As for Google, "the Pixel suddenly has got very limited competition at the high end of the market."

Samsung on Tuesday asked wireless carriers to stop selling its most expensive phone and instructed consumers to stop using them. The move came as carriers including AT&T Inc., T-Mobile US Inc., Sprint Corp., Verizon Communications Inc. and Australia's Telstra Corp. halted Note 7 sales following reports of problems with devices thought to be safe.

Before the exploding batteries, Samsung had defied a slowing smartphone market with better-than expected Galaxy sales and successfully capitalized on a lull in demand for new iPhones. In recent months, Samsung had expanded its already considerable market share. The company shipped 77 million smartphones in the second quarter for a market share of 22 percent, that's up from 73 million, or 21 percent share a year ago, according to IDC. Apple's shipments dropped 15 percent to leave it with market share of 12 percent.

Now the South Korean company enters the crucial holiday shopping season with no large-screen smartphone. Because Samsung and Apple have basically split the market for $700-plus smartphones between them, the latter is a natural beneficiary of Samsung's woes.

Investors seem to expect that to happen and pushed Apple shares up 1.7 percent to $116.05 Monday in New York, the highest level since December 2015. In the long-term, Apple could attract Android users to its "sticky iOS ecosystem, which boasts a ~95 percent loyalty rate," Credit Suisse Group AG analyst Kulbinder Garcha wrote in a note.

Still, Google's Pixel, which debuts in the US, UK, Australia, Canada and Germany on October 20, could appeal to those who are immune to Apple's charms. The Pixel is the first phone the search giant has conceptualized, designed, engineered and tested in-house. It has a number of features that will be broadly appealing, including a Siri-like virtual assistant, a flashy camera and speedy apps. Of course, the Pixel is untested, Google's previous forays into hardware have floundered, and the company lacks its own retail stores.

(Also see:  Google Pixel vs iPhone 7 vs Samsung Galaxy S7 Edge: How Does Google's Flagship Compare With Apple's and Samsung's?)

How much Apple and Google benefit depends on what Samsung does next. Already pressure is mounting for the company to kill its troubled phone altogether. Said Greg Roh, an analyst at HMC Investment Securities Co. in Seoul: "It's meaningless to continue producing the Note 7."