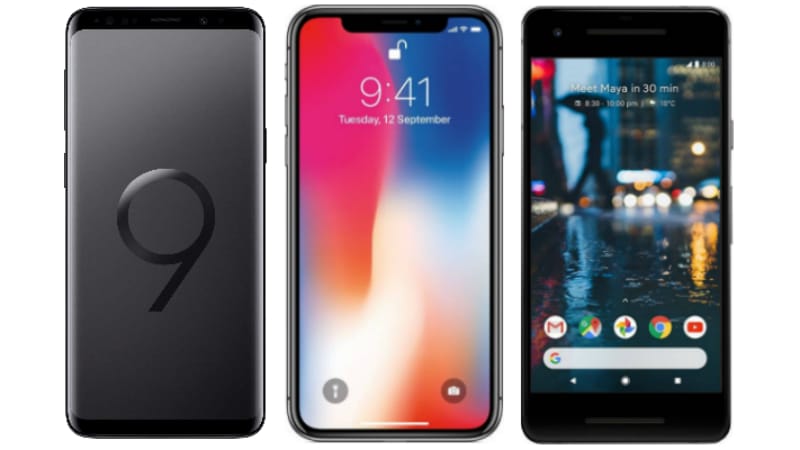 Samsung Galaxy S9 and Galaxy S9+ were launched at Mobile World Congress 2018 in Barcelona. The phones, although appearing similar to the previous-generation Galaxy S8 and Galaxy S8+, have several new features and specification upgrades. The phones feature Samsung's latest Exynos 9810 SoC (Qualcomm Snapdragon 845 SoC in some regions), improved cameras, and new AR emojis. Apart from that, the Galaxy S9 bears full screen displays with an 18.5:9 aspect ratio. However, even if the Galaxy S9 has a lot of power and exclusive features, it faces a ton of competition from Apple's iPhone X and Google's Pixel 2.

The Apple iPhone X was launched back in September 2017. The phone sports a near bezel-less display with a front-facing notch that houses the front camera, face unlock sensor, and other sensors. On the other hand, the Google Pixel 2 was launched in November 2017. The phone features an 18:9 display and runs a stock version of Android Oreo. We take a look at the Galaxy S9 price, specifications, and key features and compare them with those of iPhone X and Pixel 2 to make your buying decision easier.

Samsung Galaxy S9 price in the US starts at $719.99 (roughly Rs. 46,600) for the unlocked variant, and around $30 per month for 24 months with a financing option. The variants will be made available in select global markets; pre-orders have begun in India. The phone will be available in Lilac Purple, Titanium Grey, Midnight Black, and Coral Blue colour variants.

Apple iPhone X price in India is Rs. 95,390 for the 64GB variant and Rs. 1,08,930 for the 256GB variant. The phone is available in India in Silver and Space Grey colour variants. The phone is sold across several offline and online Apple resellers.

Google Pixel 2 price in India is Rs. 61,000 for the 64GB model and Rs. 70,000 for the 128GB variant. The Pixel 2 is available in Just Black and Clearly White colour variants. The phone was launched online exclusively via Flipkart and offline via several retailers including Croma, Reliance Digital, Sangeetha Mobiles, and Vijay Sales.

Talking about the camera, the Pixel 2 features a 12.2-megapixel rear sensor with f/1.8 aperture and OIS/ EIS. On the front is an 8-megapixel sensor with an f/2.4 aperture. The phone backs a 2700mAh battery under the hood.