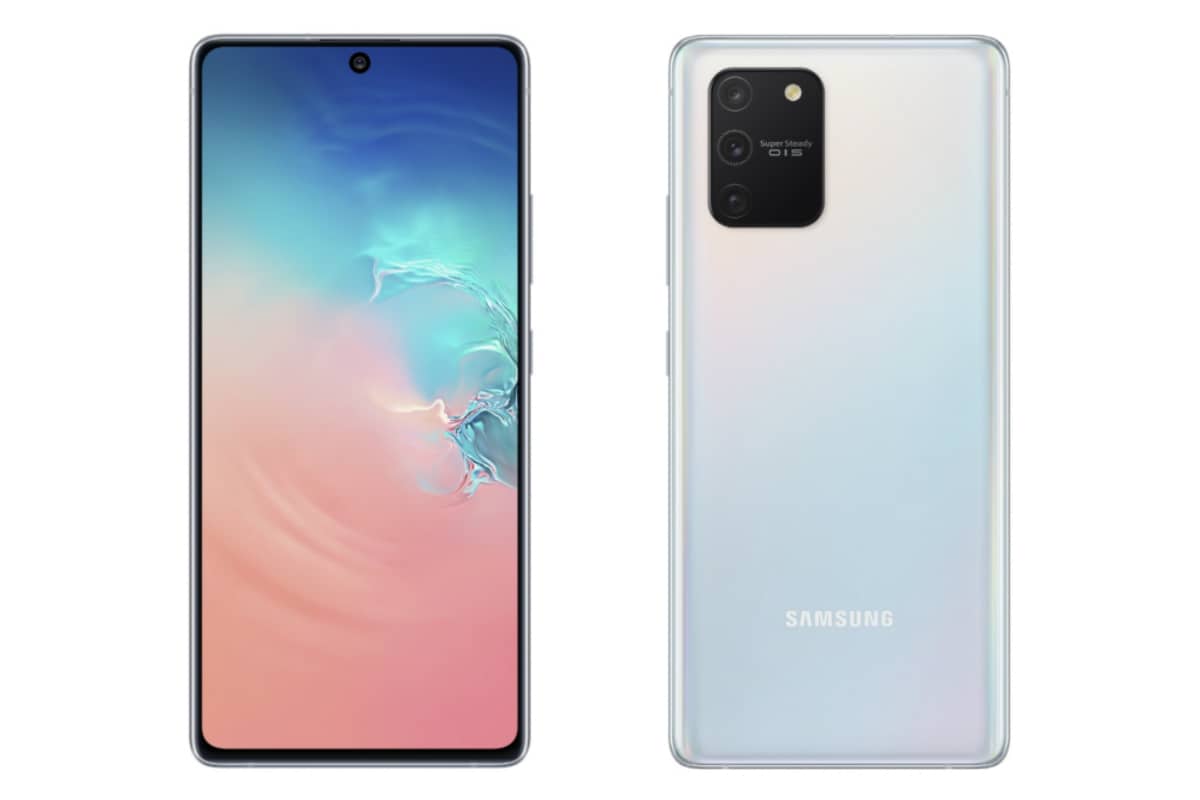 Samsung Galaxy S10 Lite and Galaxy Note 10 Lite launch was the highlight of the first week of 2020 as the tech companies prepare to show their wares at the next week's CES 2020 tech fair. We already have some announcements of the products being showcased at CES and we will be talking about some of those as well as what we can expect next week in this wrap. Additionally, Vivo S1 Pro made its India debut and Jiomart was introduced on a pilot basis. Read on for more on the happenings that dominated the tech news space this week.

Samsung Galaxy S10 Lite and Galaxy Note 10 Lite share a couple of specifications, but there are some differences between the two phones as well. Both phones feature 6.7-inch full-HD+ screen with a hole-punch design, however the Galaxy S10 Lite, which is more premium out of the two, uses Super AMOLED Plus display, whereas Galaxy Note 10 Lite has a Super AMOLED display. According to Samsung, "Super AMOLED Plus display creates ergonomic design with thin and light display panel by adopting flexible OLED technology" - whatever that means.

Additionally, the two phones have 4,500mAh battery, 32-megapixel selfie shooter on the front, 6GB and 8GB RAM options, and 128GB of onboard storage. Samsung Galaxy S10 Lite is powered by an unnamed 7nm octa-core processor that is widely believed to be Snapdragon 855, whereas Galaxy Note 10 Lite has a 10nm octa-core SoC. Both phones also feature triple rear cameras, however the setup is different. Samsung Galaxy S10 Lite has 48-megapixel, 5-megapixel, and 12-megapixel image sensors, whereas Galaxy Note 10 Lite comes with three 12-megapixel image sensors.

Samsung Galaxy Note 10 Lite features three cameras at the back

Flipkart has already started teasing the Galaxy S10 Lite launch in India. It will quite possible that we will get India launch in the next couple of weeks. Samsung Galaxy S10 Lite is likely to find many takers in the country if it is priced aggressively.

CES, the biggest tech fair on the planet, is all set to kick off next week in Las Vegas. While it will open for public on January 7, the CES-related product announcements have already started coming in. We will see the greatest number of news on January 6, the press day. As per the teasers and invites shared by various companies, we expect to hear from OnePlus about its Concept Phone. LG is going to announce a new rollable TV that will roll down from the ceiling.

Additionally, Huami is going to showcase a couple of smartwatches under its Amazfit brand – Bip S and T-Rex. TCL is another company that is going to bring new televisions at the fair and it is said some of those will use Mini-LED screen technology. Sony is also hosting an event where audio products, new TVs, and more are expected. Samsung is busy hyping up the Neon, an "artificial human," which is not related to Bixby, according to the company. Further, the likes of Intel, Panasonic, Qualcomm, AMD, MSI, Asus, Dell, Flipkart, Amazon, Lenovo, and Seagate are hosting events around CES 2020. As always, we will present at the CES to bring you all the happenings.

In terms of the CES 2020-related announcements that already happened this week. Lenovo has unveiled the refreshed versions of its ThinkPad X1 Carbon and ThinkPad X1 Yoga laptops, whereas Dell has announced updated XPS 13 laptops and a new addition to its Latitude 9100 series. Samsung have introduced the Galaxy Book Flex Alpha as the cheapest model in QLED laptop lineup.

Vivo S1 Pro was launched in India this week and is already on sale. Unlike the Vivo S1, which the new model joins in the S-series, Vivo S1 Pro will be offered both via online and offline sales channels. Vivo has released just one storage variant with 8GB of RAM and 128GB of onboard storage. It is being offered at Rs. 19,999 in Mystic Black, Jazy Blue, and Dreamy White colour options.

In terms of the specifications, the Vivo S1 Pro runs Android 9 Pie with Funtouch OS 9.2 and features a 6.38-inch full-HD+ (1080x2340 pixels) Super AMOLED display with 19.5:9 aspect ratio. Under the hood, the smartphone is powered by the octa-core Qualcomm Snapdragon 665 SoC.

Honor has finally revealed when it plans to bring the Honor 9X to India. The company has sent out invites for the press event on January 14 when it plans to launch the phone in India. Separately, Flipkart has set up a microsite for the smartphone that suggests that the e-retailer will be carrying the phone. As the Honor 9X has already been launched in China, we have a fair idea of what to expect from the phone, however, there is a possibility that there are some differences between the India variant and China variant of the smartphone.

Realme has begun selling a new 6GB RAM variant of its X2 Pro smartphone in India. The new variant's existence was revealed by the company and its India CEO last month and now, it can be purchased via Flipkart and Realme.com. Realme X2 Pro 6GB RAM variant carries a price tag of Rs. 27,999 and it joins the already available 8GB + 128GB and 12GB + 256GB models. Apart from the lower amount of RAM and 64GB of onboard storage, there is no difference between the newer model and the existing variants of the Realme phone.

Chinese smartphone maker Oppo has added another storage variant of its A5 2020 smartphone in its portfolio. The new 6GB RAM variant at Rs. 14,990 joins the existing 3GB RAM and 4GB RAM variants that currently retail at Rs. 11,490 and Rs. 12,990. It is being sold via select offline retailers in the country and will not be widely released, at least right now. As for the specifications, Oppo A5 2020 runs Android 9 Pie with ColorOS 6.0.1 skin on top. The phone features a 6.5-inch HD+ (720 x 1600pixels) display with a waterdrop notch, octa-core Qualcomm Snapdragon 665 SoC, quad rear camera setup, and 5,000mAh battery.

JioMart debut and other major tech news of the week

Reliance Jio quietly introduced its JioMart grocery delivery service this week. Set to go live in Navi Mumbai, Thane, and Kalyan soon, the service is currently being pitched to Jio customers in these areas. The new venture is touted to offer a portfolio of over 50,000 grocery products along with offerings such as free home delivery against no minimum order value, no questions asked return, and express delivery promise, as highlighted on the official JioMart website.

In other news, the Telecom Regulatory Authority of India (TRAI) revealed this week that Reliance Jio added 9.1 million new subscribers in October, taking the telecom operator's total to over 364 million. In the same period, Vodafone Idea added nearly 1.9 lakh new subscribers and 81,974 subscribers were added by Bharti Airtel.

TRAI also announced the revised tariff rules for DTH and cable TV operators this week that expand the number of channels to be offered under the base network capacity fee (NCF) of Rs. 130 + taxes. Additionally, TRAI has also directly the DTH and cable operators that they cannot charge more than a maximum of 40 percent of the declared NCF for the second and additional TV connections in a single household. There are several other changes as well that will impact both consumers and broadcasters. The new rules are currently slated to go live March 1, 2020.

BSNL unveiled new broadband plans this week with Rs. 299 and Rs. 491 monthly rental. The Rs. 299 BSNL broadband plan offers 50GB of free data at up to 20Mbps Internet speed. After the data ceiling limit is reached, the speed will be reduced to 1Mbps. The plan will offer unlimited calling to any network across India (local and STD) for free. ISD rates will be at Rs. 1.2 per unit. BSNL says that it will charge users Rs. 500 as security deposit for the new broadband connection. This promotional Rs. 299 broadband plan is valid for six months, and after that users will be migrated to the 2GB CUL plan that is priced at Rs. 399 per month. On the other hand, the Rs. 491 BSNL broadband plan also offers 20Mbps Internet speed, but the data cap goes up to 120GB. After the data limit is reached, the speed is reduced to 1Mbps. Just like the Rs. 299 plan, this one also offers unlimited voice calling benefits, and users will be migrated to the 3GB CUL plans priced at Rs. 499 after six months.

In other news this week, Xiaomi launched a new smartwatch in the form of Mi Watch Color and it joins the already available Mi Watch in the company's portfolio. Mi Watch Color is only being offered in China right now and there is no word on when it will be released in other markets. The Mi Watch Color will set buyers back by CNY 799 (roughly Rs. 8,000) and comes with features like a 1.39-inch display with a resolution of 454 x 454 pixels, NFC, 24x7 heart rate tracking, stress monitoring, and sleep tracking.

Lastly, Chandrayaan-3 is happening. Indian Space Research Organisation (ISRO) chief K Sivan revealed this week that Chandrayaan-3 lunar mission has been approved by the government. The Chandrayaan-3 mission will have a lander and a rover, but not an orbiter. It will have the same configuration as Chandrayaan-2 mission.

How to Deactivate or Delete Your Instagram Account: Easy Steps
CES 2020: Superfast 5G on the Slow Road at Gadget Gala