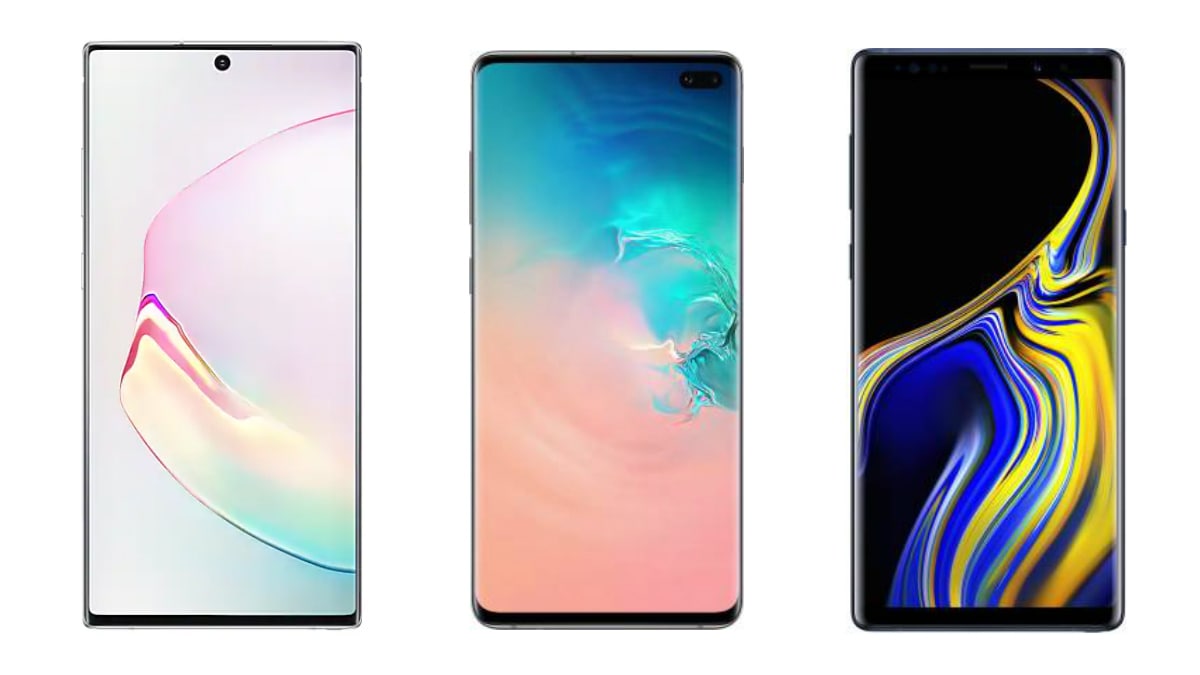 Samsung Galaxy Note 10 (extreme left) has a 3,500mAh battery on board

Samsung unwrapped its latest flagship Galaxy Note 10 at a global event yesterday, and the phone brings premium specifications and design offerings. It sports a curved dual-edged hole-punch display that Samsung likes to call Infinity-O display, with the cutout placed in the top centre of the screen. In India, the phone comes with an Exynos 9825 SoC that was announced hours before the launch event, a triple rear camera setup, a 3,500mAh battery, and more. There is a 10-megapixel front camera inside the cutout on the screen.

The Samsung Galaxy S10+ price in India is set at Rs. 73,900 for the 8GB RAM + 128GB storage variant, going up to Rs. 91,900 for the 8GB RAM + 512GB storage variant and Rs. 1,17,900 for the 12GB RAM + 1TB storage option. The 128GB Galaxy S10+ model is available in Prism Black, Prism Blue, and Prism White colour variants, while its 512GB and 1TB variants come in Ceramic Black and Ceramic White colour options. It is available for purchase through online sources, including Amazon.in, Flipkart, Paytm Mall, and Samsung Online Store, as well as via various offline retailers.

The Samsung Galaxy Note 9 price in India starts from Rs. 67,900 for the 6GB RAM + 128GB storage variant, while the 8GB RAM + 512GB storage variant is currently listed for Rs. 76,900. It comes in four colour options - Ocean Blue, Midnight Black, Metallic Copper, and Lavender Purple. The phone is also offered in an Alpine White edition, however it is limited to the 128GB variant. The smartphone is available to buy via Amazon India, Flipkart, Paytm Mall, and the Samsung Online Store, and offline stores.

Talking about design first, the Samsung Galaxy Note 10 sees a big shift with a new glossy back panel design, triple rear camera alignment to the top left placed vertically, and an Infinity-O display with the cut-out placed in the top centre. The bezels are a bare minimum, and the dual-edged curved display remains. The Samsung Galaxy S10+, launched earlier this year, also offers minimal bezels, but has two cutouts for the dual front camera sensors and they are placed on the top right of the screen. The triple rear camera setup is placed at the top centre, aligned horizontally. Last year's Galaxy Note 9 has thicker bezels at the top and bottom, compared to the other two, with the front camera placed on the top bezel. The back panel has a dual camera setup placed horizontally in the centre, and a rear fingerprint sensor is also integrated. The Galaxy S10+ and the Galaxy Note 10, on the other hand, sport in-display fingerprint sensors.

The Samsung Galaxy Note 10 and Galaxy Note 9 both have S Pen stylus support, while the Galaxy S10+ lacks it.  The Galaxy Note 10 has an all-new S Pen featuring a 6-axis sensor with a gyroscope and acceleration sensor.

In terms of the imaging capabilities, Samsung Galaxy Note 10 houses a triple rear camera setup with a 12-megapixel wide-angle (77 degrees) primary sensor that has a variable aperture from f/1.5-f/2.4 as well as optical image stabilisation (OIS). The setup also features a 16-megapixel sensor with an ultra-wide angle (123 degrees) lens and an f/2.2 aperture. Finally, it includes a 12-megapixel sensor with a telephoto lens (45 degrees), an f/2.1 aperture, and OIS.

The Galaxy Note 9 has a horizontally-placed dual rear camera setup that includes a 12-megapixel dual pixel sensor along with a wide-angle lens that has a variable f/1.5 and f/2.4 aperture and a 12-megapixel sensor along with a telephoto, f/2.4 autofocus lens. Both sensors have dual OIS (optical image stabilisation) and support features such as 2x optical zoom as well as 10x digital zoom.