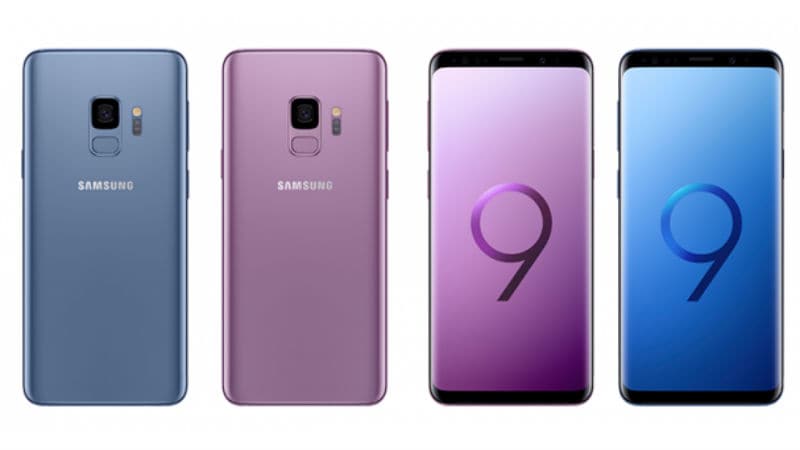 Samsung Galaxy S9 has just been announced at MWC 2018 and comparisons with the company's previous flagships - Galaxy S8 and Galaxy Note 8 - are bound to happen. It is clear from Samsung's Galaxy Unpacked event on Sunday, that the new smartphone features minor upgrades from the previous models but it does bring in some refreshing new features. While the Galaxy S9 looks similar to their predecessor, it does pack some important changes.

The new Galaxy S9 comes with reduced bezels at the top as well as bottom, and Samsung has hiding the iris scanner at the top of the display. Additionally, now the the iris scanner and the face recognition now work together.It has also made the screen darker, which means the display blends well with the rest of the body. Morever, the biggest changes have arrived in the optics dedpartment, as the camera in Galaxy S9 offers more social-media focussed features. While the Galaxy S9 will take on other flagship smartphones, it is also interesting to see if it is worth upgrading from the Samsung Galaxy S8 or the Galaxy Note 8.

The Samsung Galaxy S9 price starts at $719.99 (roughly Rs. 46,600) in the US, while the Samsung Galaxy S9+ will be available at $839.99 (roughly Rs. 54,400). Samsung will likely launch this phone in India by March given that pre-bookings are open. The exact pricing details regarding the smartphones are expected to be announced at the India launch event of the Galaxy S9 and Galaxy S9+. Notably, the handset will be available in Midnight Black, Coral Blue, Lilac Purple, and Titanium Grey colours.

Samsung launched the Galaxy S8 in India with a price tag of Rs. 57,900 (MOP). Currently, it is available via the Samsung India E-Store. The India price tag evidently bears a significant premium over the US pricing. In the US, the Samsung Galaxy S8 was priced at $720 (roughly Rs. 46,700). It comes in Midnight Black and Maple Gold colour options. Meanwhile, the Samsung Galaxy Note 8 had arrived in India with a price tag of Rs. 67,900. It is available in its Maple Gold and Midnight Black colour variants

Samsung Galaxy S9 vs Galaxy S8 vs Galaxy Note 8 features
Samsung prime focus in its latest flagship smartphones, is the cameras. One of the features, called Super Slo-Mo captures videos at 960 frames per second. The Galaxy S9 offer automatic Motion Detection, an intelligent feature that detects movement in the frame and automatically begins to record. Samsung has also included dual-aperture in the phone's primary rear camera sensor, which enables the camera to capture clear images in both bright and dark conditions. It is capable of shooting at f/2.4 when there's ample light, but can switch to f/1.5 when the phone detects low-light conditions.

Samsung also introduced AR Emoji to take on Apple's Animoji. It is meant to be a virtual avatar of sorts that lets you click a 3D picture of yourself and turn it into customised emoji. The final camera-related improvement on the Galaxy S9 and Galaxy S9+ is the introduction of Bixby Vision in the camera app that will now offer live translation features, the ability to recognise the buildings and other places in a frame, and even look at the food in your frame and provide information like the amount of calories in the item.

Another upgrade is the presence of dual speakers on the Samsung Galaxy S9 and Galaxy S9+ (tuned by AKG Acoustics) with one downwards firing speaker, and the earpiece doubling up as the other channel. This setup, Samsung says, results in sound that's 1.4 times louder than the Galaxy S8.

When Samsung launched the Galaxy S8 in 2017, it stressed how the new Galaxy S8 was the "start of a new era." It had showcased its in-house voice-based virtual assistant named Bixby, which made its debut on the flagship phone. Iris recognition was introduced in the Galaxy S8, a feature which was earlier seen on the Samsung Galaxy Note 7. Samsung had also introduced the DeX, which let users use smartphone like a computer by docking it to monitor, keyboard, and mouse.

Coming to the Galaxy Note 8, while Samsung's Infinity Display was first seen on the Galaxy S8 and Galaxy S8+, the Galaxy Note 8 boasted of a huge 6.3-inch Quad HD Super AMOLED Infinity Display- the biggest yet. Additionally, Samsung had integrated a few new features into the stylus. The main highlight was a feature called Live Messages which essentially lets users draw an animated sketch and send it to any app. Just like the Samsung Galaxy S8, the Galaxy Note 8 came with a dedicated side button to activate Bixby. DeX has also introduced as a dock for the Samsung Galaxy flagship, essentially useful for using the Note 8 on a big desktop screen. One new feature was App Pairing which essentially allows users to launch two apps together in multi-window.

On the other hand, the Samsung Galaxy S8 sports a 5.8-inch bezel-less 'Infinity Display' with 1440x2960 pixels screen resolution. It was launched running on Android 7.0, but recently Samsung started rolling out the Android 8.0 Oreo update for the smartphone. Samsung Galaxy S8, in India, is powered by an Exynos 9985 SoC coupled with 4GB of RAM and 64GB inbuilt storage with up to 256GB storage expansion. In some other markets, Samsung also launched the Galaxy S8 with Snapdragon 835 SoC (2.3GHz Quad + 1.7GHz Quad).

Meanwhile, the Samsung Galaxy Note 8 sports a big 6.3-inch Quad-HD+ AMOLED Infinity Display of resolution 1440x2960. It runs Android 7.1.1 Nougat. It is powered by Qualcomm Snapdragon 835 SoC (with some markets getting the Samsung Exynos octa-core variant), coupled with 6GB of RAM. It packs 64GB of internal storage and support for microSD card.

For photography, the Samsung Galaxy Note 8 has dual 12-megapixel rear cameras with OIS on both the f/1.7 wide-angle lens and the f/2.4 telephoto lenses with 2x optical zoom. Also, there is a f/1.7 8-megapixel camera on the front. The Samsung Galaxy Note 8 is fuelled by a 3300mAh battery. The device offers IP68 water and dust resistance, and support for wireless charging. Connectivity options include Wi-Fi, GPS, Bluetooth, NFC, USB OTG, Headphones, 3G and 4G (with support for Band 40 used by some LTE networks in India). It measures 162.5x74.8x8.6mm and weighs 195 grams.