Samsung Galaxy Note 8: Top 8 Features You Need to Know About 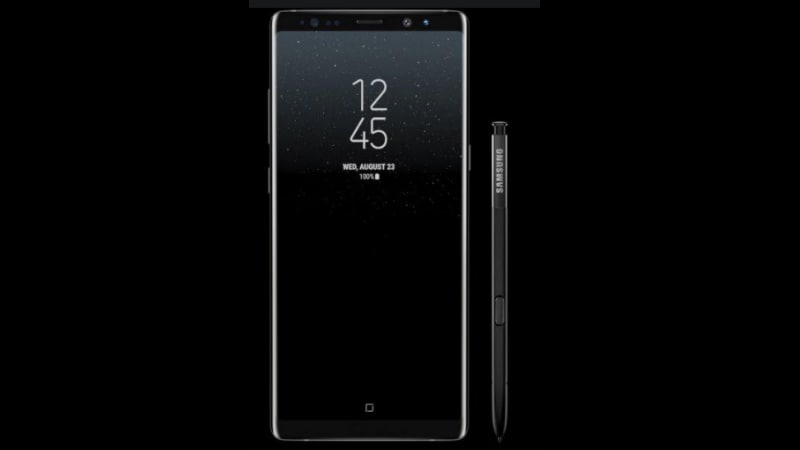 Samsung unveiled the Galaxy Note 8 at a grand event in New York, and the smartphone boasts of powerful specifications and some nifty features that did make the audience applaud. Samsung has boosted capabilities of the S Pen, the camera, the DeX dock, and much more on the Galaxy Note 8, and it's now a tall standing competition among all the other flagships that are set to release this fall.

Let's look at some of the top features of the Samsung Galaxy Note 8 that are really in the running to give tough competition to the iPhone 8 and Google Pixel phones this fall.

While Samsung's Infinity Display was first seen on the Galaxy S8 and Galaxy S8+ as well, Samsung Galaxy Note 8 boasts of a huge 6.3-inch Quad HD Super AMOLED Infinity Display - the biggest yet. The screen on the Galaxy Note 8 is over half an inch larger than its predecessor. Samsung claims that this is done mainly to allow users to make the most of the split screen features, and the live messages feature of the S Pen.

Samsung warmed up to the idea of dual cameras on a smartphone, and finally introduced them on the Galaxy Note 8. The company claims that this is the first setup which comes with optical image stabilisation on both the sensors at the back. Calling it 'Live Focus', a depth-of-field Bokeh effect and Portrait mode has been introduced which means you can now procure those blurry background selfies. Furthermore, the density of blur can also be adjusted to your liking - before or after you take the picture.

The Samsung Galaxy Note 8 has two 12 megapixel sensors - one with a wide-angle lens, dual pixel autofocus, and an f/1.7 aperture, while the other is a telephoto lens with an f/2.4 aperture that allows you to get up to 2x optical zoom and 10x digital zoom.

The 'Note' series is largely successful because of the S Pen functionality, and Samsung has integrated a few new features into the stylus. The main highlight was a feature called Live Messages which essentially lets users draw an animated sketch and send it to any app. It essentially is a GIF maker, which turns your drawing into an animated GIF, and then lets you share it to any app that supports GIF.

The other feature mentioned in the keynote was that users could write on the lock screen itself, allowing them to create reminders or quick notes without opening apps or even pressing any button on the smartphone. There's also a live translate feature that translates any foreign language text to your smartphone's default language just by hovering the S Pen over it. It also converts currency in the same way.

Just like the Samsung Galaxy S8, the Galaxy Note 8 comes with a dedicated side button to activate Bixby. The inclusion is more useful now, as Samsung this week also started rolling out Bixby Voice support to as many as 200 countries, making it more accessible. The company promises to evolve the assistant, and add new features in the very near future.

DeX has been introduced as a dock for Samsung Galaxy flagships, essentially useful for using the Note 8 on a big desktop screen. With the launch of the Galaxy Note 8, Samsung has expanded the app catalogue that expands on the large screen with DeX Labs. This program now allows majority of apps to go full-screen when the Galaxy Note 8 is connected to the docking station. This really makes it useful for users who love to keep all the data on their smartphone, but have to occasionally work on a big screen as well.

One other feature that caught our attention was App Pairing. It essentially allows users to launch two apps together in multi-window. You can create an app pair in App Edge or on your homescreen, and then launch them together in split screen mode whenever you prefer. You can make a combination of apps like Chrome, Gmail, YouTube, WhatsApp, or any other of your liking. This is useful for users who like to use multiple apps while multitasking, and are often switching between two apps to get work done. You can now pair two of your most used apps, and simultaneously launch them quickly to get work done easily.

While other OEMs were offering 6GB and even 8GB RAM on their smartphones, Samsung was happy with its standard 4GB RAM offering on the Galaxy S8, except for some Asian markets, where it really had to introduce bigger RAM variants to combat competition. Now, with the Galaxy Note 8, Samsung is offering 6GB of RAM, allowing the smartphone to really live up to its multimedia and processing capabilities, something that the Galaxy Note series has been known for.

Lastly, but importantly, Samsung Galaxy Note 8 supports the latest Bluetooth version - Bluetooth 5 - bringing in improvements like faster speeds and longer range. Compared to its predecessor, Bluetooth 5 increases the bandwidth of up to 2Mbps and up to 8 times better broadcasting message capacity. Another interesting thing to note is the two times faster bandwidth and four times better range is applicable when working in low-energy mode too, which is the case with most accessory devices. This addition will really elevate your accessory usage experience with the Galaxy Note 8.