Samsung Galaxy C9 Pro vs Moto Z vs OnePlus 3T: Which One Should You Buy? 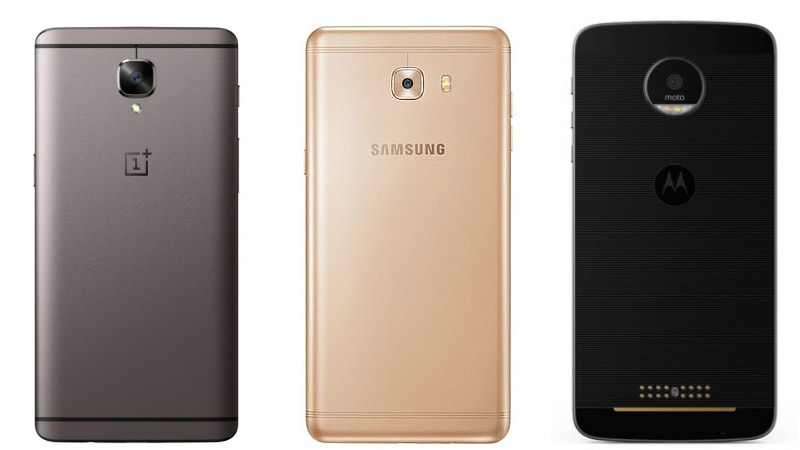 Samsung has kicked off pre-bookings of the Galaxy C9 Pro smartphone in India. The new C9 Pro, priced at Rs. 36,900, will be up for pre-bookings till February 12, after which shipments are expected to begin. It is also the first smartphone from Samsung to sport 6GB RAM, and was first unveiled in January.

While independently, Samsung's new C9 Pro looks good on paper for its price, it is set to compete with a bunch of other phones in the same price vicinity. The most notable smartphones that do well in the Indian market are the OnePlus 3T and the Moto Z smartphones. We pit the three against each other to find out which one is the smartest buy.

Price, availability, colour options
When it comes to price, the Samsung Galaxy C9 Pro falls in between, with the price tag being at Rs. 36,900. The OnePlus 3T's most premium - 128GB storage - variant is still competitively priced at Rs. 34,999, while the Moto Z launched in October last year, is the most expensive at Rs. 39,999. The Samsung phone is only just up for pre-order on the Samsung India online store and will be shipped post February 12. The Moto Z smartphone is available on Flipkart and Amazon, while OnePlus is known for its exclusive partnership with Amazon. Coming to colours, the OnePlus 3T 128GB is available in Gunmetal, the Moto Z comes in Black with Lunar Grey trim, and White with Fine Gold trim colour variants; and Samsung's C9 Pro is up for pre-orders in Black and Gold colour variants.

Design, specifications
While the Samsung Galaxy C9 Pro and OnePlus 3T sport metal builds, the Moto Z bears a glass back and a metal frame. All three come with a fingerprint scanner housed underneath the Home Button at the front. The camera at the back is also situated in the top centre of all three phones

With respect to specifications, the Motorola Moto Z is the slimmest at 5.19mm, with the OnePlus 3T the thickest at 7.35mm. The C9 Pro is the heaviest at 189 grams, with the Moto Z being the lightest at 136 grams. The Samsung smartphone sports the largest screen with a 6-inch full-HD display, while the other two have smaller 5.5-inch screens. The Moto Z sports better screen resolution with a QHD screen. In the order of superiority, the OnePlus 3T sports a Snapdragon 821 processor; the Moto Z sports a Snapdragon 820 processor, while the C9 Pro sports a Snapdragon 653 processor. Both the Samsung and OnePlus devices come with 6GB of RAM, while Motorola falls short with 4GB of RAM.

As for memory, the OnePlus 3T (Review) offers 128GB for Rs. 34,999, while the other two offer 64GB. However, the OnePlus device does not allow expansion of storage, while the other two have a microSD slot. Samsung and OnePlus units both sport 16-megapixel front and rear sensors, while the Motorola device has a 13-megapixel rear and a 5-megapixel front snapper. All three offer LTE, dual-SIM support, and run on Android 6.0 Marshmallow (with OnePlus and Samsung's own skins on top) out of the box. In the battery department, Samsung wins with a 4000mAh battery, while the OnePlus 3T packs a 3400mAh battery, and Moto Z (Review) offers only 2600mAh battery.

Overall
The big highlight of the C9 Pro is its 4000mAh battery, 16-megapixel selfie camera, and 6GB of RAM. It sits well in Samsung's own portfolio, and is best suited for users who wish to get top-of-the-line specs for non-flagship level prices. However, OnePlus 3T offers almost similar specifications (in some cases better) at a much lesser price. If you're only looking at value for money, the OnePlus 3T is a great buy. However, it's not on sale on Amazon as of now. Therefore, the Samsung Galaxy C9 Pro priced just slightly higher is a great option as well. Alternatively, if you are really enticed by the snap-on Moto Mods, then the Moto Z should be your clear preference, even though it's the most expensive of the lot.

Reliance Jio’s JioCinema Adds Smart Download Option: What Is It and How Can You Use It?
Honor V9 With Dual Rear Cameras Set to Launch on February 21