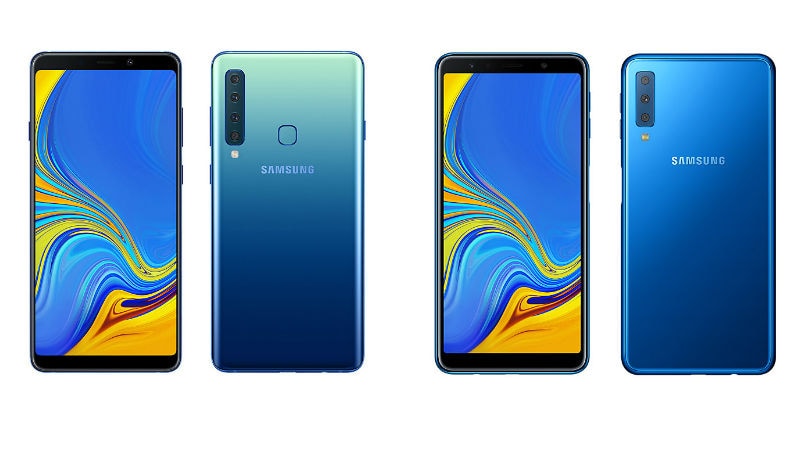 Samsung Galaxy A9 (2018), touted to be the world's first smartphone with a quad-camera setup, was launched in India earlier this week. The mid-range smartphone features competitive specifications and design elements and is looking to take on its rivals in one of its key markets, India. Besides the four cameras at the back, Samsung has also packed an 18.5:9 Infinity Display panel and a 3D Glass curved back in the Galaxy A9 (2018). It is powered by the Snapdragon 660 processor, paired with up to 8GB of RAM. Beside smartphones from rival manufacturers, Samsung's new A-Series handset will also have to compete with its other camera-centric smartphone - Galaxy A7 (2018). While there are several differences between the smartphones in terms of specifications, the camera and design details do not seem too dissimilar. Also, the Galaxy A7 (2018) is priced much lower than the newly-launched Galaxy A9 (2018).

Here we take a look at how the price and specifications of the Samsung Galaxy A9 (2018) compare against the Galaxy A7 (2018), to give you a better idea of how the new handset stacks up against the other mid-ranger.

The Samsung Galaxy A9 (2018) has bee priced in India starting at Rs. 36,990 for the 6GB RAM model. Meanwhile, the top-end 8GB RAM variant costs Rs. 39,990. The handset will go on sale in India via online and offline channels on November 28, but interested buyers can pre-book it right now. Notably, the smartphone comes with three colour options - Bubblegum Pink, Caviar Black, and Lemonade Blue. It is worth noting that buyers of the Samsung Galaxy A9 (2018) can avail certain launch offers including a cashback worth Rs. 3,000 using an HDFC debit or credit card. Notably, the smartphone will be available for purchase via Airtel Store, Amazon, Flipkart, Paytm Mall, and Samsung Shop.

PUBG Mobile 0.9.5 Update With Royale Pass Season 4 Now Live for Android and iOS
How Samsung's C-Lab Aims to Incubate Innovation Inside and Outside the Company