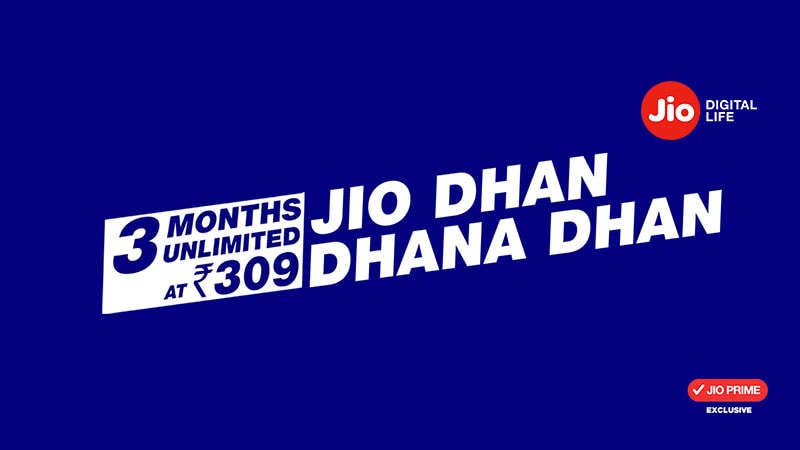 Missed out on the tech news of the week? You've come to the right place if you want to catch up. This week, Reliance Jio was in the spotlight because of its new Dhan Dhana Dhan offer. Under the Jio Dhan Dhana Dhan offer, customers will get 1GB of data per day for three months (84 days) at just Rs. 309 (plus Rs. 99 if you aren't already a Jio Prime customer). The new Jio offer comes soon after the company had to withdraw the Jio Summer Surprise offer after TRAI ordered for it be cancelled.

The Jio Dhan Dhana Dhan offer is aimed at customers who were unable to avail the Jio Summer Surprise offer benefits before it was pulled officially, as well as new customers. In order to get the benefits of the new Jio offer, users needed to subscribe to Jio Prime membership plan and buy the Rs. 309 or Rs. 509 recharge.

Jio rivals all rolled out their own versions of the offer quickly as well - Airtel, Vodafone, and Idea all launched similar 4G plans. At the same time, Vodafone complained to TRAI that Reliance Jio was taking too long to withdraw its Summer Surprise; Airtel moved TDSAT for the same reason.

That's not all that's been happening in the world of telecom either. For one, BSNL now has a 10GB per day plan, at just Rs. 249. Don't get too excited though - that's a wired-broadband plan, not mobile Internet. The plan's speed is 2Mbps per day, capped at 10GB, after which is drops to 1Mbps. And that Rs. 249 is the introductory offer, valid only for new users - after six months, it goes up to Rs. 449.

And if you're a Vodafone user who hasn't switched to 4G yet, now's the time to do it - the company is offering 4GB of 4G data free to users in the Mumbai circle who upgrade to 4G now. Prepaid users will get 10-days to make use of it, while postpaid users will have till the next billing cycle.

Apart from that, the BHIM app got a major update this week as well. The BHIM app now has support for support for new languages, allows you to do a money transfer to your contacts, scan QR codes from the phone's storage, and more. There is also a one-time option to alter your virtual payment address (VPA), so it doesn't have to be your phone number.

The BHIM-Aadhaar platform was also launched this week, and as the name suggests, it enables the app to be used for Aadhaar-number based payments, instead of relying on a VPA. There are also several incentives to help boost its usage, including referrals for users, and cashbacks for merchants. Launching the platform, Prime Minister Narendra Modi said the BHIM-Aadhaar platform would revolutionise the Indian economy. IT Minister Ravi Shankar Prasad said it will boost honesty in tax payments.

Another rumour is that the Xiaomi Mi Max 2 will launch alongside the Mi 6, and it will come with a 5,000mAh battery. Separately, a report from China indicates the arrival of the Mi Note 3 sometime in the second quarter. Leaked specifications include a 5.7-inch display and the latest Snapdragon 835 SoC paired with 8GB RAM.

And as per a Geekbench listing, the Xiaomi Mi 6 scores higher than a Samsung Galaxy S8. Speaking of which, the India launch for the Galaxy S8 has been confirmed - also on April 19. It's worth noting that the Samsung Galaxy S8 and Galaxy S8+ are already up for pre-registrations in India. We can expect to get clarity on the availability and pricing of the phones at the launch event.

This week, Google also launched a new app in India - a local services app called Areo. It allows you to pay bills, order food, call a plumber to fix your sink, or have a beautician come over to give you a facial. Areo bundles together services from other companies, so for example, the food delivery section you can flip between Freshmenu, Faasos, and Box8. For other categories such as beauty and repairs, UrbanClap appears to be the main services provider at present. The Areo app services are currently only available in select regions of Bengaluru and Mumbai.

Earlier this week, Airtel also launched a new set-top box for DTH users. Dubbed the Internet TV box, this set-top box supports the TV channels you subscribe zto, along with apps such as Netflix, YouTube, and games, without the need for a separate smart TV box. Airtel Internet TV set top box is priced at Rs. 4,999, exclusively on Amazon, and comes with three months of Digital TV subscription. There's also built-in Chromecast support, and a Bluetooth-based remote that supports Google voice search.

Meet Caavo, the Designed in India Set-Top Box That Wants to Rule Them All

There were a number of other phone launches this week. The all-new HTC One X10 has been launched in Russia, and comes at an equivalent price of $355 (roughly Rs. 23,000). The HTC One X10 features a 5.5-inch full-HD display, and is powered by an octa-core processor, 3GB of RAM, and 32GB storage.

Micromax has launched its all-new Evok series which will be exclusively available on Flipkart in India. The Micromax Evok Note features a 5.5-inch full-HD display, a 1.3GHz octa-core SoC, 3GB of RAM, 32GB storage, and a massive 4000mAh battery. The Micromax Evok Power, on the other hand, features a 5-inch HD display and is powered by a 1.3GHz quad-core processor, coupled with 2GB of RAM and 16GB storage.

The Sony Xperia XA1 was also launched this week. It is the successor of the Sony Xperia XA launched last year. The smartphone was unveiled first at MWC 2017 in Barcelona, and features a 5-inch HD display, powered by an octa-core processor, 3GB of RAM, and 32GB of internal storage.

Aside from these phone launches, there were also a couple of more leaks about upcoming phones. Specifically, there were rumours about four new phones from Motorola. Lenovo may have just unveiled the Moto G5 and Moto G5 Plus, but the company has a lot more coming it would seem. The Moto C and Moto C Plus have been making rounds on the Internet lately, and now the phones have been spotted in new renders showing the design. Additionally, Lenovo also seems set to reboot the Moto E range with its rumoured Moto E4 which has also leaked in a render, alongside the premium Moto Z2.

And if that's not got you excited, there's the leaked specs of the OnePlus 5 - the phone reportedly has 8GB RAM, a Snapdragon 835 SoC, and slimmer bezels. The phone was spotted on a Chinese regulator's site, pretty much confirming that the company is skipping the number 4 in the model name, as the number is considered inauspicious in China. OnePlus is set to unveil the device sometime in the second half of 2017, and previous reports claim that the smartphone will sport a dual-edged screen, hardware navigation keys, although the bezel will be slimmer than the predecessor.

Meanwhile, on Monday, Flipkart announced funding of $1.4 billion, its largest round of funding, from Microsoft, eBay, and Tencent. Meanwhile, Snapdeal's journey seems to be coming to a close, but the company has reportedly announced pay hikes for all employees ahead of any sale. And Amazon India has gotten RBI approval for its wallet, which could speed up checkout and cashbacks for the company.

Apart from all this, there were a few interesting items from the world of entertainment as well. At Star Wars Celebration, Disney released the first teaser trailer of Star Wars: The Last Jedi. It has gotten people excited, and with good reason. There's some really interesting lines in the trailer, and overall, it looks good. Meanwhile, analysts say that Nintendo might launch a follow-up to the Switch soon - the Nintendo Switch Mini could come in 2019 itself. Microsoft on the other hand, has a new version of Skype for the Xbox One. At least it's promised that it will unveil Project Scorpio at E3 2017 this year.