With premium designs and plenty of cameras, these phones are fighting to be your first choice 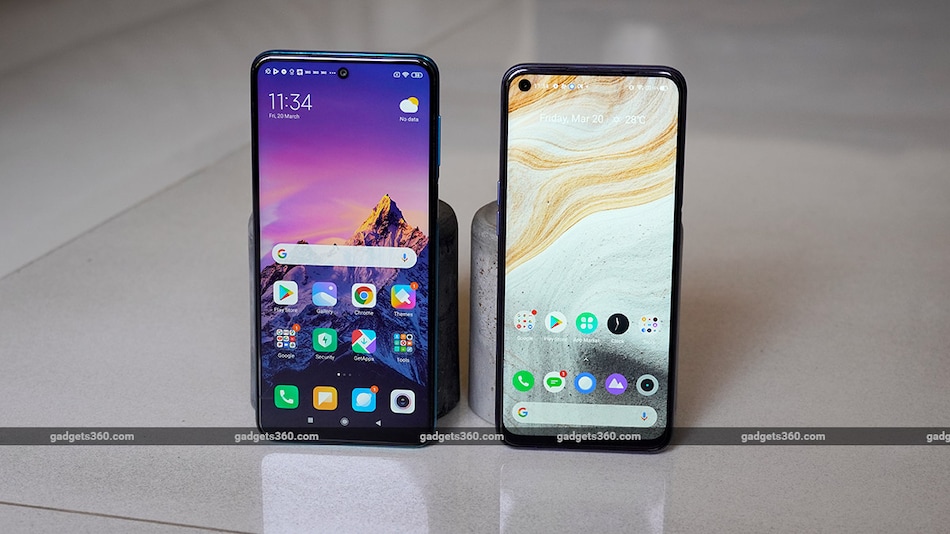 The budget smartphone scene has gotten to a point where not a week goes by without a new model launching, or at least some teaser or rumour about the next phones on the horizon coming out. Both Xiaomi and Realme have recently churned out multiple phones that have already changed our expectations for this segment, and we're only in the first quarter of 2020.

Realme was the first to raise the bar for a sub-Rs. 15,000 smartphone with the Realme 6 (Review), which offers premium features such as a hole-punch front camera, a 90Hz refresh rate display, and a powerful processor, at a starting price of just Rs. 12,999. Xiaomi obviously wasn't going to take this lying down, and unsurprisingly, a few weeks later, we now have the Redmi Note 9 Pro (Review) to take on the Realme 6.

With the Realme 6 and Redmi Note 9 Pro both starting at Rs. 12,999 with the same amounts of RAM and storage, which is the one you should be putting your money on? Let's have a look.

The 4GB RAM and 64GB storage versions of both phones are priced at Rs. 12,999 in India. The next step up gets you 6GB of RAM and 128GB of storage for each of them, but the Realme 6 is less expensive at Rs. 14,999, compared to Rs. 15,999 for this variant of the Redmi Note 9 Pro. Xiaomi doesn't have a higher variant after this unless you go for the Realme Note 9 Pro Max, but Realme offers a third version of the 6 with 8GB of RAM and 128GB of storage for Rs. 15,999. Realme has a slight edge as its highest variant has 2GB more RAM than Xiaomi's offering at the same price. Overall, both phones offer very good value.

Just when the designs of most budget smartphones have begun to blend with one another, the Redmi Note 9 Pro comes in with a distinctive camera layout, which should help it stand out. The camera bump is sizeable but so is the bump on the Realme 6. The Aurora Blue colour looks great, but the shiny back picks up smudges almost instantly. It's a heavy phone at 209g but it's slimmer than the Realme 6, measuring 8.8mm. Xiaomi has used Gorilla Glass 5 on the front and back of this phone and it even has a P2i nano coating, which should help it survive light splashes of water.

The placement of the power and volume buttons aren't the most ergonomic though. The power button is a tad too high and the volume buttons are hopelessly out of reach for one-handed use. Xiaomi continues to offer an infrared emitter on the top, so you can use the Redmi Note 9 Pro as a secondary remote for your home appliances. Both phones have a headphone jack, USB Type-C port, and speaker grille at the bottom. Both also have a tray for two Nano-SIMs and a microSD card on the left.

The Realme 6 borrows a familiar design from its existing siblings, which at this point, feels a little stale in comparison to Xiaomi's offering. It's thicker but the volume and power buttons are on opposite sides of the body, and are a lot more ergonomic for daily use. Just like the Redmi Note 9 Pro, the Realme 6 has a slightly recessed power button which is also the capacitive fingerprint sensor. However, the back panel uses laminated plastic instead of glass, which is where it loses some points.

Both phones have side-mounted fingerprint sensors

Despite its slightly heavier body and awkwardly placed buttons, we'd still pick the Redmi Note 9 Pro over the Realme 6 when it comes to design. It looks refreshingly new, a glass back is always good to have, and it's a bit slimmer, which makes it nicer to hold.

Both smartphones are equipped with powerful octa-core processors. The Redmi Note 9 Pro uses the Qualcomm Snapdragon 720G SoC, while the Realme 6 uses the MediaTek Helio G90T SoC. Both produce similar scores in most of the popular benchmark apps. The Redmi Note 9 Pro scored 279,978 points in AnTuTu; 568 and 1,761 in Geekbench's single-core and multi-core tests; and 3,665 points in 3DMark's Slingshot Unlimited. In comparison, the Realme 6 scored 290,210 points in AnTuTu; 467 and 1,688 points in Geekbench; and 3,131 in 3DMark.

In general use, we didn't face any issues with either smartphone. Multitasking is handled well and both are snappy when navigating through Android with their respective custom UIs on top. The fluid effect when scrolling is missing in the Redmi Note 9 Pro, which the Realme 6 enjoys thanks to the 90Hz refresh rate.

Both phones handled heavy 3D games with ease in our tests. We tried the usual heavy hitters such as PUBG Mobile and Asphalt 9: Legends — both of which ran very well, with solid framerates. The Realme 6 did get a little warmer than the Redmi Note 9 Pro after an extended gaming session, but the temperatures of both devices never got out of control.

Both phones also have equally fast fingerprint sensors, and a quick tap on the side is all it takes to wake them without actually having to press their power buttons. Face recognition also works equally well on both phones.

The Redmi Note 9 Pro has a slightly larger 6.67-inch full-HD+ display with Gorilla Glass 5 protection. The Realme 6 on the other hand, has a 6.5-inch display with the same resolution, but only gets Gorilla Glass 3. Both phones use IPS LCD panels rather than AMOLED, and we found the brightness and colours to be more than adequate, even for outdoor use during the day.

Both also feature hole-punch cutouts, with the Redmi Note 9 Pro having its front camera in the centre, while the Realme 6 has it in the upper left corner. The cutouts are quite large and can be distracting, especially in apps that fill up the full screen.

Coming to sound quality, the speaker in the Realme 6 can get a lot louder than the one in the Redmi Note 9 Pro at full volume. Apart from that, it also sounds a bit richer and more detailed.

When it comes to charging, the Realme 6 can be topped up a lot quicker, thanks to support for 30W fast charging and a smaller battery, compared to 18W and a larger battery in the Redmi Note 9 Pro.

Autofocus is quick on both phones, and when shooting landscapes in daylight, we found that the Realme 6 did a better job overall. Details in distant objects were better represented and colours were more natural, compared to the Redmi Note 9 Pro which often sharpened images and boosted colours a bit too much. Looking at the shots taken with both phones' wide-angle cameras, it's the Redmi Note 9 Pro that did a better job with details. This was true for macro shots as well. Close-ups were almost evenly matched, although we preferred the slightly richer colours and textures that the Realme 6 produced.

In low light too, it was the Realme 6 that delivered better details and exposures in the darker regions of photos. Surprisingly, the Realme 6's wide-angle camera performed slightly better in low light, compared to the Redmi Note 9 Pro.

With selfies, we found that the Realme 6 captured better details and skin tones, although the Redmi Note 9 Pro wasn't too far behind. Both selfie cameras captured weak details in low light, but we preferred the warmer skin tones of the Realme 6's photos. With screen flash enabled on both phones, the Redmi Note 9 Pro captured brighter colours, but these were wildly exaggerated. The Realme 6 captured more evenly lit photos with more neutral colours.

In low light, footage recorded with both phones at 4K is noisy but the Realme 6 captures better colours. At 1080p, footage is still grainy but the Realme 6 manages better exposure and details, compared to the Redmi Note 9 Pro, which captures softer details. As for the wide-angle cameras, it's the Redmi Note 9 Pro which had slightly better looking results, although both phones only managed to capture very dark video that was barely usable.

Both Xiaomi and Realme offer their own customised versions of Android 10. The Redmi Note 9 Pro runs MIUI 11, which features a lot of gestures and shortcuts that you can enable. It's also quite customisable with themes, and has other Android staples such as Digital Wellbeing and a system-wide dark mode. This being MIUI, you should expect a lot of spammy notifications from stock apps such Mi Store, Browser, and GetApps. You can disable these in some apps, but not all.

Realme's new Realme UI is lean and offers a look and feel that's closer to stock Android, which we appreciate. You get an app drawer and plenty of options for customising the look and feel of the interface. The Realme 6 does have many preinstalled applications, just like the Redmi Note 9 Pro, and most of them can be uninstalled. Thankfully, there isn't too much annoyance in the form of unsolicited notifications from the stock apps, and those that do get through can be disabled.

Despite the issues with spam in the MIUI, both custom skins are polished and easy to live with. There would be a small learning curve with either one, if you're coming from a phone running stock Android, but neither is too complicated. Xiaomi has spent years refining the look and feel of MIUI and Realme has taken Oppo's already fairly polished ColorOS and has added some of its own flair to it.

If we had to pick a winner between the Redmi Note 9 Pro (Review) and the Realme 6 (Review), based on all the tests we've done on them, the Realme 6 would be the one. It's more manageable for everyday use, with more ergonomically placed buttons and quicker charging. It has a slightly more powerful processor, better loudspeaker, and higher refresh-rate display. Its cameras also deliver more consistent performance. Then there's the Realme UI software, which we prefer over MIUI. Looking at the variants on offer, the top-end version of the Realme 6 gets you 2GB more RAM than the top-end version of the Redmi Note 9 Pro, for the same amount of money.

The Redmi Note 9 Pro is a solid offering too, and one-ups the Realme 6 in some areas, most notably its scratch-resistant glass back, more distinctive design, bigger battery, and better wide-angle and macro cameras. However, it's not the easiest to manage in the hand, MIUI can be annoying with its never-ending spam notifications, and it isn't as easily available as the Realme 6, since it's sold only through flash sales as of now.

If you're looking for the best smartphone currently on sale for under Rs. 15,000, then the Realme 6 is the one to go for. However, do stay tuned to Gadgets 360 for our review of the Redmi Note 9 Pro Max, coming up soon.