Redmi Note 5 Pro vs Moto G6 vs Oppo Realme 1: Which One Should You Buy? 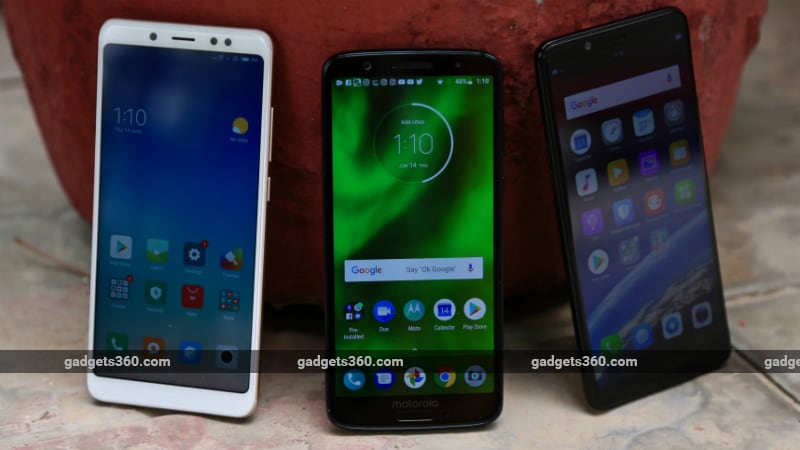 Smartphones with 18:9 displays are becoming ubiquitous and now Motorola has embraced this trend with the sixth generation of the budget-minded G series. The company recently launched the Moto G6 (Review) and Moto G6 Play in India. The Moto G6 starts at Rs. 13,999 and comes with a glass and metal design, a dual camera setup at the rear, and near stock Android. With that launch, competition market of smartphones around Rs. 15,000 has heated up considerably. The Moto G6 faces tough competition from the likes of the Oppo Realme 1 (Review), which offers tremendous value for money, and the Xiaomi Redmi Note 5 Pro (Review), which has established itself as the segment benchmark. We spent some time with the three smartphones, comparing them in detail, and here is everything that we learnt.

While the Redmi Note 5 Pro has a metal backplate, the Moto G6 has a sleek and shiny curved glass back which helps it stand out from the crowd. Not only does the Moto G6 look the most premium of the three, it is extremely compact and easy to hold in one hand thanks to the manageable width and rounded edges.

On the flip-side, the glass back is a fingerprint magnet and makes the Moto G6 very slippery. The Realme 1's back panel is made of fibreglass and has a distinctive glossy diamond-cut effect on the back. The design is slightly polarising and might come as gaudy to some. All three phones are built well, but it is the Redmi Note 5 Pro that feels the most solid and substantial.

While the Redmi Note 5 Pro and Moto G6 have a significant camera bump, the camera module on the Realme 1 barely protrudes from the chassis. The Moto G6 is the only smartphone with a USB Type-C port. The Realme 1 and Redmi Note 5 Pro in comparison use the age-old Micro-USB port for charging and data transfers.

The Realme 1 is powered by the Helio P60 chipset, which is MediaTek's flagship processor and features NeuroPilot AI technology which can handle deep learning for facial detection as well as photo and video enhancement. The Redmi Note 5 Pro and Moto G6 in comparison are powered by the Snapdragon 636 SoC and Snapdragon 450 processor respectively.

The Redmi Note 5 Pro has a sizeable 4,000mAh battery, the Realme 1 has a 3,410mAh battery, and the Moto G6 makes do with a 3,000mAh unit. Connectivity options on all three phones include 4G VoLTE, Wi-Fi 802.11 b/g/n, Bluetooth, GPS/ A-GPS, and a 3.5mm headphone jack which is fast becoming extinct in smartphones. The Realme 1 supports dual 4G VoLTE, a feature missing in the Moto G6 and Redmi Note 5 Pro.

Redmi Note 5 Pro vs ZenFone Max Pro M1: Which One Should You Buy?

All three smartphones feature tall 18:9 IPS LCD displays which are not exactly borderless and have a resolution of1080x2160 (full-HD+). The Realme 1's 6-inch display is decent but a cut below the one found on the other two. Colours are vibrant (if not entirely accurate) but viewing angles are disappointing and so is sunlight legibility.

The panels on the Redmi Note 5 Pro and Moto G6 have their set of pros and cons. The 5.99-inch display on the Redmi Note 5 Pro is easy to view in direct sunlight and has great viewing angles but seems a bit dull and washed out. The Moto G6's 5.7-inch panel in comparison renders colours accurately but is not bright enough for outdoor use.

All three smartphones are fairly capable of handling day-to-day use, but the Moto G6, thanks to the low-end Snapdragon 450 SoC under the hood, exhibits slight lag and stutter while handling intensive workloads. The Moto G6 also becomes very warm when pushed, a problem not faced with the other two.

There is very little to choose between the smartphones when it comes to gaming. We did experience lag while loading heavy games like Asphalt 8 on the Moto G6, but gameplay was smooth across all three.

While precise and accurate, the rear-mounted fingerprint sensor on Xiaomi's smartphone is a bit slow compared to the one on the Moto G6. The pill-shaped sensor on the Moto G6, which is present below the display, is very small but is extremely fast and accurate. A fingerprint sensor is conspicuous by its absence on the Realme1, which relies on on facial recognition, plus the usual passcode options, for security.

All three smartphones use the front facing camera for facial recognition, which comes with the usual caveats such as poor performance in low-light and less than stellar security. The Moto G6's face recognition is the worst of the bunch and is very iffy and inaccurate.

The Moto G6 runs a near stock version of Android 8.0 Oreo with Motorola's traditional gestures such as chop to turn on the flashlight and double-twist to launch the camera app. The Realme 1 and Redmi Note 5 Pro in comparison run a heavily skinned version of Android. The Realme 1 runs Oppo's highly modified Color OS 5.0 on top of Android 8.1 Oreo. While the interface is fluid and snappy, it is extremely cluttered and in dire need of simplification. There is no app drawer and the Settings app and quick launch panel are quite hard to navigate around.

The Redmi Note 5 Pro runs MIUI 9.2 atop Android 7.1.2. While an update to Oreo is on the way, it is disappointing to see Android Nougat on a smartphone being sold in June 2018. MIUI has come a long way and in its current iteration, is a smooth and feature packed OS. That said, it is riddled with bloat and is still not as clean and fluid as stock Android.

While all three phones easily lasted through a full day of moderate to intensive use, it was the Redmi Note 5 Pro that had a little more juice left at the end of the day. In our HD video loop battery test, the Realme 1 lasted 11 hours and 30 minutes and the Redmi Note 5 Pro lasted an incredible 16 hours and 36 minutes. The Moto G6 posted a disappointing score of 8 hours and 40 minutes but real-world performance was satisfactory.

The Moto G6 ships with a 15W Turbo Charger which can charge the phone fully in less than 1.5 hours. Both the Realme 1 and Redmi Note 5 pro do not ship with a quick charger but the latter atleast supports quick charging.

In our experience, photos taken with the Redmi Note 5 Pro in less than stellar light were mediocre at best. The smartphone managed to extract a decent amount of detail in low-light but images were over-exposed and colour accuracy was iffy.

The Moto G6 has a tendency to over-sharpen images at night in order to reduce noise. That said, the Moto G6 takes in the most amount of light and captures decent detail. The Realme 1 captures colours better than the rest but suffers from a lack of detail.

Images taken with the Redmi Note 5 Pro in adequate light were a cut above the other two. Pictures were sharp and crisp and the phone managed to capture the most amount of detail. The Moto G6 in comparison tended to over-expose images and images taken with the Realme 1 were soft and lacking in detail.

The Redmi Note 5 Pro and Moto G6 have a secondary sensor at the back that allows for the capture of images with depth of field effects. Bokeh shots taken on both smartphones were above average, but the Redmi Note 5 Pro had better edge detection and delivered smoother gradients between a subject and its background.

The Moto G6 has the best selfie camera of the bunch. It takes detailed shots during the day and captures the most usable shots in low-light. The Realme 1 and Redmi Note 5 Pro in comparison capture grainy and noisy images in inadequate light. Videos taken with all three smartphones are nothing to write home about, with the Redmi Note 5 Pro having a slight edge in terms of stabilisation and detail.

Redmi Note 5 Pro vs Moto G6 vs Oppo Realme 1: Which one should you buy?
The Redmi Note 5 Pro (Review) is undoubtedly the most well-rounded smartphone of the bunch. It looks good, is built well, and performs admirably. The battery life is also stellar making it the best option for road warriors.

The Moto G6 (Review) is gorgeous and compact but does not have the performance to match its looks. That said, it has the best front camera out of the three and is a great option for selfie lovers. Those looking for the best rear camera should stick to the Redmi Note 5 Pro, which struggles slightly in low light but delivers the most detailed images when lighting conditions are favorable.

While the lower variants of the Realme 1 (Review) offer tremendous value for money, the variant with 6GB of RAM is hard to recommend given the phone's lack of a fingerprint sensor and cluttered and confusing UI.