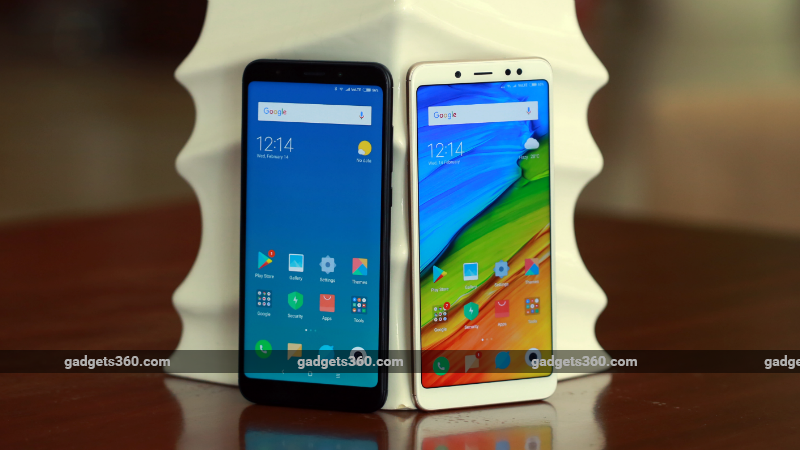 Welcome back to our weekly roundup of the news you can use from the world of tech. After launching last week, the Redmi Note 5, Redmi Note 5 Pro, and also the Mi TV 4 all went on sale this week, on Thursday. According to Xiaomi, it sold over 300,000 units of the phones in less than 3 minutes. The Mi TV 4 clearly arrived in smaller quantities, as the 55-inch television, priced at Rs. 39,999, apparently sold out in less than 10 seconds.

The Mi TV 4 will go on sale again on February 27. It's going to be available via Mi.com, Flipkart, and Mi Home stores. The Mi TV isn't just a decent panel at a reasonable price. The Chinese company has worked closely with Bengaluru-based Sensara to bring a version of the Mi TV's PatchWall UI to India. It is compatible with most set top boxes in India, and you can use the Mi TV remote to search for both on-demand content from the Internet, and live TV via your set top box, all through the PatchWall UI.

Meanwhile, Reliance Jio has rolled out a new offer for deal hunters. Called the Jio Football Offer, it gives Rs. 2,200 cashbacks for buying an eligible handset, and then activating a Jio SIM in it. The smartphone brands eligible for this offer include those from brands like Samsung, Xiaomi, Asus, Motorola, Panasonic, Huawei, Nokia, LG, Micromax, 10.or, BlackBerry, and LYF, but the offer is applicable only on select handsets.

If you're eligible, Jio will give 44 cashback vouchers worth Rs. 50 each. First, you'll have to get a recharge of either Rs. 198, or Rs. 299. After that, the cashback vouchers can be used for future recharges on any of Jio's packs, which you can use through the MyJio app on your phone. Although the fragmented nature of the cashback may be off-putting for some, if you're planning on using Jio for a while, then you're getting a pretty decent amount of money back over time.

India Found to Have Slowest 4G LTE Speeds in the World, Again

The other telcos have also come out with new offers to keep customers happy. First up - Idea. It has announced a new Rs. 109 plan, under which you get "unlimited" voice calls, 1GB data, and a 14-day validity. The voice calls are actually capped at 250 minutes a day and 1000 minutes a week, which is fairly standard. On the other hand, in Andhra Pradesh and Telangana, Airtel is offering a new Rs. 98 plan, that gives 28-days validity, and 5GB 4G/ 3G data. And BSNL is launching a new Rs. 399 plan, with unlimited calls, though what data will be bundled, what the validity will be, or even when the plan will be available, is not known yet. Vodafone also has a new Rs. 158 pack, which offers 1GB data a day for 28 days, and unlimited calling.

A new app from Google is looking pretty interesting. Google Reply is an auto-responder for Android. You know how Gmail can send quick responses? Well, Google Reply brings that to all your apps; although for now it's started with just a selection of them, including Hangouts, Facebook Messenger Lite, Slack, Skype, and Twitter DMs. It's not been launched yet, but the APK leaked and so people have been trying it on different devices. It's not working properly on all devices, but on the ones where we got it to work, we loved the app, which can also help you easily answer questions like, "how long till you get home?" by using your location data.

With MWC 2018 nearly here, the leaks have picked up tempo as well. The big one is multiple leaks about the price of Samsung's new flagship phones. According to prolific tipster Evan Blass, the Samsung Galaxy S9 and Galaxy S9+ will have a price tag of EUR 841 (roughly Rs. 67,200) and EUR 997 (roughly Rs. 79,600) respectively. That's a step up from the earlier prices of Samsung's flagship phones. Another leak suggests a EUR 1,000 price tag for the Galaxy S9+ (roughly Rs. 79,800), and EUR 849 (roughly Rs. 67,700) for the Galaxy S9. This is in line with what Blass tipped as well, so it's looking increasingly likely that Samsung's phones will be getting more expensive this year.

Apart from the high price, the phones performance scores will also be suitably high. The Galaxy S9+ has been spotted on Geekbench for the first time, and scored an impressive 3773 in single-core performance and 9024 in multi-core performance. The two phones' specifications were also leaked, seeming to confirm details such as a single camera on the Galaxy S9, and a dual rear-camera for the Galaxy S9+. The report also talks about stereo speakers with surround sound, and both phones will have an 18.5:9 aspect ratio when it comes to the display. The launch itself is expected to make use of augmented reality, with an AR model of the phone.

Meanwhile, ahead of the launch, Flipkart is already teasing the Galaxy S9 in India, which should hopefully mean a quick launch here. According to reports, the pre-orders of the phone will start from February 28 in Samsung's home ground of South Korea, and early buyers will reportedly get their units delivered between March 9 and March 15, a day before supposed public availability.

There's also been a few snippets of news about Nokia. Ahead of MWC 2018, there were fresh leaks of the Nokia lineup. Nokia 9 has seen several leaks and rumours around its design and specifications over the past year. It could be one of HMD Global's key announcements for the event. HMD Global also is said to be planning to launch a new flagship smartphone called Nokia 8 Pro. Earlier this month, HMD Global was rumoured to have trademarked a new handset with model name 'Nokia 8 Sirocco', and the latest leaks suggest that this will be sold under the retail name of Nokia 8 Pro. Reports also suggest that Nokia 7 Plus, the company's first smartphone with 18:9 aspect ratio, and another smartphone called the Nokia 4 could also be unveiled at Barcelona this year.

There was a further leak of the Nokia 7 Plus, via press renders from China. The renders show a dual camera setup with a Carl Zeiss lens and dual LED flash on the back; a rear-mounted fingerprint sensor is seen below the camera lens. There is also a seemingly 18:9 display with thin bezels on the front.

At the very start of the range, there's also the Nokia 1, which was spotted on the US FCC site. Based on the listing, you can expect a 5-inch display, and earlier rumours have pointed to 1GB of RAM, and 8GB of storage. The phone is expected to be one of the first Android Go devices, and you can expect a low price tag to match.

We also got a look at the upcoming Moto G6, which will launch in five colour variants. From this, we also got to look at the back, where it has dual-cameras. Aside from that, it looks like the phone will apparently sport an 18:9 display. A separate leak has us believe that the phone will have the Snapdragon 625 SoC, and will come with a 3GB RAM variant. It will reportedly be powered by a 3000mAh battery.

Beyond this, there was a lot more happening, including some interesting launches. The Blu Vivo X has launched and gone on sale in the US for $299.99 (roughly Rs. 19,500) - the phone has a quad-camera setup, with two in the front and two on the back. There's a heavy focus on selfies with this phone, with a 20-megapixel sensor, and an 8-megapixel sensor with a wide-angle lens; on the back, there's a 13-megapixel sensor with a 5-megapixel depth-sensor. The phone will only come with 4GB RAM, and 64GB storage, and a 4010mAh battery.

The First 5G Olympics? Not Really, Spectators Say
Self-Driving Cars With 'Remote' Drivers Could Test on California in April