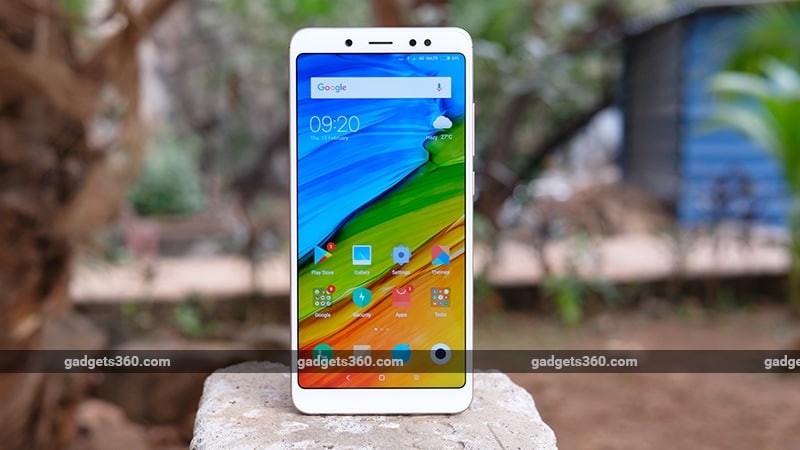 Redmi Note 5 Pro price in India has been raised, with effect from May 1, for its 4GB RAM/ 64GB inbuilt storage variant and is now available at a new starting price of Rs. 14,999 instead of the one it was launched at - Rs. 13,999. The Redmi Note 5 Pro has been in short supply since launch, and Xiaomi says the move is an effort to increase supplies of the smartphone in the face of recent changes in PCBA import taxes and the rupee depreciation. The company says its local PCBA production will only ramp up to 100 percent by Q3 2018. But, the timing couldn't have been worse for Xiaomi and Redmi Note 5 Pro as Taiwanese electronics giant Asus recently announced the launch of its latest mid-range smartphone - the ZenFone Max Pro M1.

The biggest forte of the ZenFone Max Pro M1 is its System-on-Chip (SoC). It is the only smartphone in the country, currently, other than the Redmi Note 5 Pro to be powered by Qualcomm's Snapdragon 636 SoC. Add to that, the 3GB RAM/ 32GB inbuilt storage variant of the ZenFone Max Pro M1 is priced at Rs. 10,999, the one with 4GB RAM/ 64GB inbuilt storage at Rs. 12,999, and a third variant (6GB RAM/ 64GB onboard storage) coming soon priced at Rs. 14,999. The latter two variants are of particular interest as they offer similar specifications but are priced up to Rs. 2,000 lower than the Xiaomi Redmi Note 5 Pro's variants. Notably, the 6GB RAM/ 64GB onboard storage variant of the Redmi Note 5 Pro is still available for its launch price of Rs. 16,999.

Let's talk briefly about specifications of both these phones.

In terms of optics, the smartphone bears a dual camera setup with a 12-megapixel primary sensor and a 5-megapixel secondary sensor, accompanied by an LED flash. On the front, the Redmi Note 5 Pro gets a 20-megapixel Sony IMX376 sensor with an LED selfie-light and Beautify 4.0. There is a 4000mAh battery under the hood with fast charging support.

On the other hand, the Asus ZenFone Max Pro M1 runs a stock version of Android 8.1 Oreo out-of-the-box. It has a similar 5.99-inch full-HD+ IPS FullView panel with an 18:9 aspect ratio. Additionally, this phone is also powered by an octa-core Snapdragon 636 SoC, coupled with 3GB/ 4GB/ 6GB of RAM and 32GB/ 64GB onboard storage.

In the camera department, the ZenFone Max Pro M1 bears a dual camera setup at the back with a 13-megapixel primary OmniVision sensor and a 5-megapixel secondary depth sensing sensor. On the front, the phone gets an 8-megapixel selfie sensor with f/2.0 aperture. A 5000mAh battery powers the internals from underneath.

Talking about pros and cons, in our review we noted that the Asus ZenFone Max Pro M1 has a good design and construction quality, a vibrant display, great internal performance, decent cameras, and is extremely value for money. However, it lacked in terms of battery life despite the 5000mAh unit, and has a rather awkward camera app interface.

On the other hand, in terms of pros and cons, the Xiaomi Redmi Note 5 Pro also sports a bright and vivid display, has a decent build quality, competent cameras, and, again, a great value for money. The smartphone lacks USB Type-C, does not have a bundled fast charger despite support for it, and comes with a lot of pre-installed bloatware.

The ZenFone Max Pro M1 will be up for pre-orders exclusively via Flipkart starting 12pm on May 3, while the next sale to buy the Redmi Note 5 Pro will take place at 12pm on May 2 on Flipkart and pre-orders on Mi.com will begin at 12pm on May 4. Availability is an issue plaguing both smartphones, although we will have to wait to see the stock situation for the Asus handset.