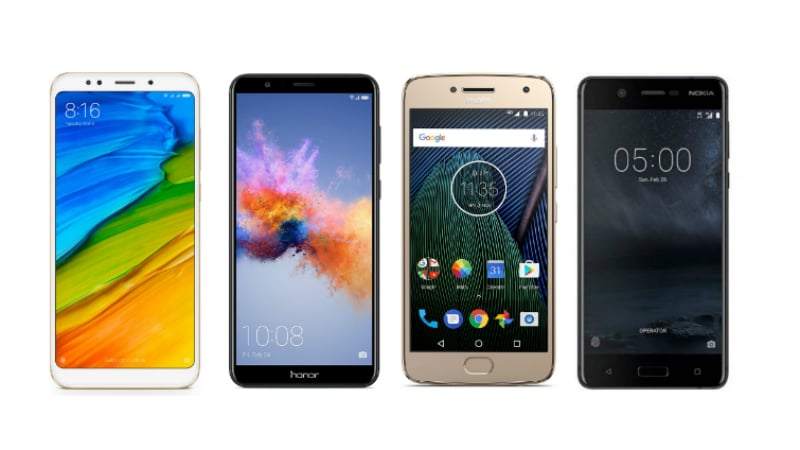 Redmi Note 5, price in India starting at Rs. 9,999, will go on sale on February 22 online and offline

Redmi Note 5 has entered the Indian market roughly a year after the Redmi Note 4 set the market ablaze, and thus will have huge shoes to fill. As Xiaomi's new budget warrior, the Redmi Note 5 has its task cut out, and features a larger display with bezel-less design, large battery, and a camera that the company claims has improved over last year's model. However, even as it has enough firepower - on paper at least - the new Redmi Note 5 will find the going a little tough as there is a lot of competition in the affordable segment.

The Honor 7X 32GB was launched in India in December last year, and is one of the only few phones to feature a dual camera setup in this price segment. Motorola's mid-range smartphone Moto G5 Plus was launched in India back in March 2017. The Nokia 5 was launched by HMD Global in India in June - it runs a stock version of Android, and recently got the Android 8.0 Oreo update. We take a look at the specifications and price in India of Redmi Note 5, Honor 7X 32GB, Moto G5 Plus and Nokia 5 to help you figure out which models will serve your purposes the best.

The Honor 7X 32GB price in India is Rs. 12,999 for the base variant that sports 4GB RAM and 32GB storage. The 4GB RAM/ 64GB storage variant is priced at Rs. 15,999. Both variants are available on Amazon.in, while the 4GB RAM variant can also be bought across Honor's offline partner retailers. Colour variants of the phone include Black, Blue, Gold, and a limited edition Red.

The Moto G5 Plus price in India is Rs. 14,999 for the 4GB RAM/ 32GB storage variant. The phone is available via Flipkart, Amazon.in, Moto Hub stores, and other Motorola offline retail partners. Colour variants of the phone include Lunar Grey, Fine Gold, and Sapphire Blue.

The Redmi Note 5 is a dual-SIM smartphone that runs MIUI 9 based on Android Nougat. It sports a 5.99-inch full-HD+ (1080x2160 pixels) display with an 18:9 aspect ratio. The phone borrows the Qualcomm Snapdragon 625 SoC from the Redmi Note 4, and comes coupled with 3GB/ 4GB RAM and 32GB/ 64GB inbuilt storage. In the camera department, the Redmi Note 5 has a 12-megapixel rear sensor that comes with features like an f/2.2 aperture, PDAF, EIS, and LED flash. On the front is a 5-megapixel sensor with LED flash and Beautify 3.0.

The Honor 7X 32GB is a dual-SIM smartphone that runs EMUI 5.1 based on Android Nougat. The phone bears a 5.93-inch full-HD+ (1080x2160 pixels) IPS 18:9 display. It sports a HiSilicon Kirin 659 SoC, coupled with 4GB RAM and 32GB inbuilt storage. In terms of camera optics, the phone has a dual rear camera setup with a 16-megapixel primary sensor and a 2-megapixel secondary depth sensor. It also has an 8-megapixel front camera for selfies and video calling.

The Moto G5 Plus is a dual-SIM smartphone that runs Android Nougat. It sports a 5.2-inch full-HD (1080x1920 pixels) IPS LCD display with Gorilla Glass 3 protection. The phone is powered by a Qualcomm Snapdragon 625 SoC, coupled with 3GB/ 4GB of RAM and 16GB/ 32GB of inbuilt storage. The phone bears a 12-megapixel rear camera with features such as dual autofocus pixels, f/1.7 aperture, dual-LED flash, and 4K video capabilities. The Moto G5 Plus also has a 5-megapixel selfie camera with an f/2.2 aperture and a wide-angle lens.

And, lastly, the Nokia 5 is a dual-SIM smartphone that runs Android 8.0 Oreo. The phone sports a 5.2-inch HD (720x1280 pixels) IPS LCD display. It is powered by a Qualcomm Snapdragon 430 SoC, coupled with 2GB/ 3GB RAM and 16GB of inbuilt storage. The phone features a 13-megapixel rear camera sensor, which comes with PDAF, f/2.0 aperture, and dual-tone flash. On the front is a 8-megapixel sensor with features such as autofocus and an f/2.0 aperture.