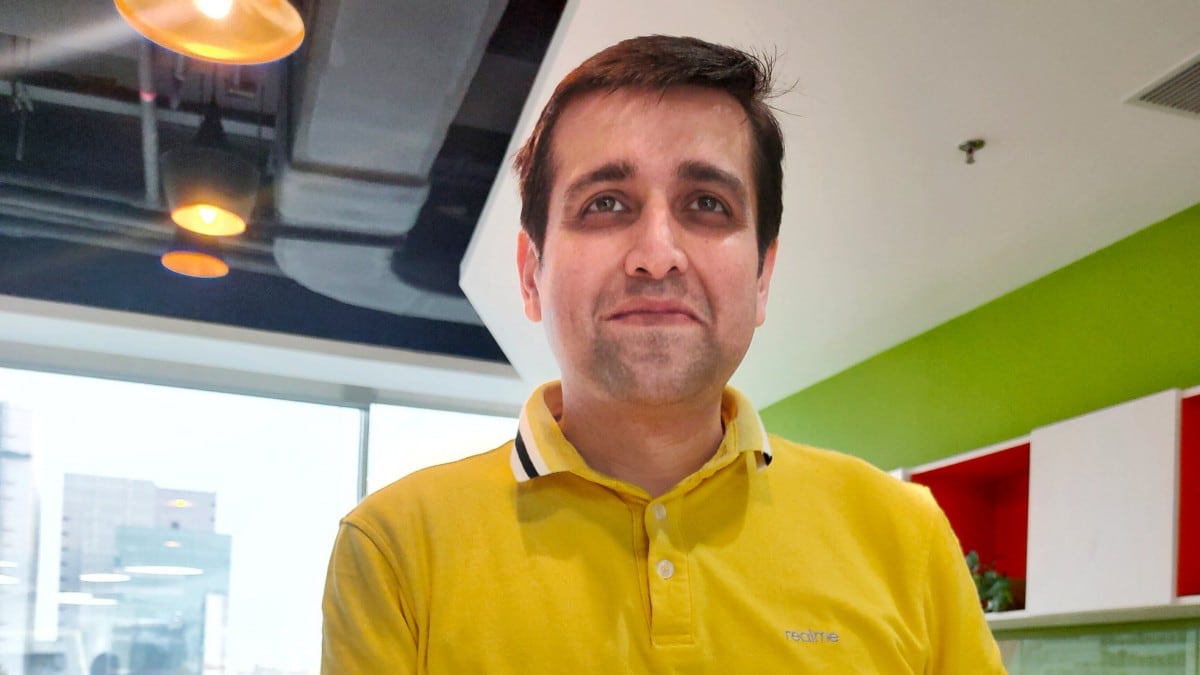 Realme faces fierce competition from the likes of Xiaomi, Vivo, and Oppo in India

Technology startups in the US have a favourite place to start the innings: garages. In India, garages are a luxury as they come with expensive bungalows so a tiny meeting room with a couple of chairs is considered a godsend among the fraternity.

This is exactly what Madhav Sheth -- a distributor for Samsung mobile phones in the past , and now the CEO of Realme that is billed as the fastest growing tech-lifestyle brand in India - was given in May 2018 to create some ripples in an already crowded market.

Here is the report card for Realme's first financial year: Revenue hit Rs 15,000 crore and smartphone shipments reached over 20.5 million units in 2019 (year-on-year growth of a whopping 500 per cent from 2018).

The phenomenal growth - despite cutting-throat competition from the market leader Xiaomi in the same price-segment - has only made Madhav more humble, who now has a swanky third-floor office in the hub of Gurugram - two floors below the big brother Oppo.

"People criticized me when I launched my first product with a renewed focus on the chipset and internals while not including the fingerprint sensor. They said this is not the product for a market like India. They probably did not know that I was well aligned in the distribution space and understood the online customers much better. I knew what they want online across price points," Sheth told IANS in a freewheeling chat at an extremely colourful Realme office.

Numbers speak for him: The company sold more than 6 million Realme 5 series devices in India last year and took manufacturing to 3.5 million units per month, with 50 per cent local sourcing.

According to Counterpoint Research, Realme grabbed the fourth spot in India in the third quarter (July-September period) last year with 16 per cent market share - behind Xiaomi, Samsung and Vivo.

In the festive sales period, the company sold 5.2 million smartphones -- over 160 per cent growth from the festival sales days from last year.

"We are now the No. 1 'Quality Smartphone Brand' in India adjudged by CMR (CyberMediaResearch) with the lowest return rate and the highest customer satisfaction on reliability," informed Madhav.

"Becoming the No.1 brand on Flipkart too is a testimony to the fact that we have made our mark in a small time-frame, becoming one of the most preferred mobile phone brands for its performance, design and quality," asserted a beaming Madhav who has too much on his plate for 2020.

"I want to create an entire ecosystem of products around smartphones that Indians can embrace seamlessly. I am constantly thinking about how can I bring more connected devices into my users' lives to deliver exceptional experiences for them," Madhav told IANS.

As Realme grows by leaps and bounds, Xiaomi must internally be preparing a strategy to defend its territories.

Next on the anvil are Realme Android TVs (Chief Marketing Officer Xu Qi Chase has reportedly revealed the next ammo for 2020) that can very well shake the foundation of its arch-rival.

"Realme has all the ingredients to emerge as a bigger brand in 2020. They have the momentum and are riding on the industry trends, with faster time to market and bringing in the right products at the right time," Tarun Pathak, Associate Director at Counterpoint Research, told IANS.

Realme has been listed as the No 2 online brand from the September 2018-October 2019 period by Counterpoint. The Realme C2, Realme 3i and Realme 5 series were the best-selling devices for the brand in Q3.

"Additionally, Realme has got a good mind-share from consumers' point of view and a stronghold on the overall supply-chain ecosystem," Pathak added.

A somewhat shy Madhav realizes this and has devised a clear strategy for 2020.

"In 2020, Realme will be focusing on introducing IoT-based products with focus areas being audios and wearables. We will start to build a new Realme tech and lifestyle ecosystem with our own unique software experience, starting from Realme 'PaySa' and Realme UI as well," Sheth elaborated.

Realme 'PaySa' aims to serve individuals and small and medium enterprises (SMEs) in both metros and tier II and III cities. It offers digital personal loan up to Rs 1 lakh and digital SME loans up to Rs 5 lakh.

The company aims to acquire 25 million customers in the next two years. While the beta launch of the platform has started, a full rollout is expected in the next six-12 months.

According to Pathak, Realme is aggressively targeting Xiaomi.

"It will be challenging not only for Xiaomi but for others as well, as all will be out of their comfort zones, targeting new users in 2020," he noted.

The CEO, however, is not interested in talking about the competition.

"I am doing my job, trying to meet ever-evolving Indian customers' demands, not just with smartphones but all the products around it," he said.

Is Sheth the next poster boy of the Indian smartphone industry?

There is little guessing here.

Realme Aims to Double Smartphone Shipments in 2020 to 50 Million