Realme 5s has slowly been detailed in a bunch of teasers this week, giving us an idea of what to expect at the November 20 India launch next week. 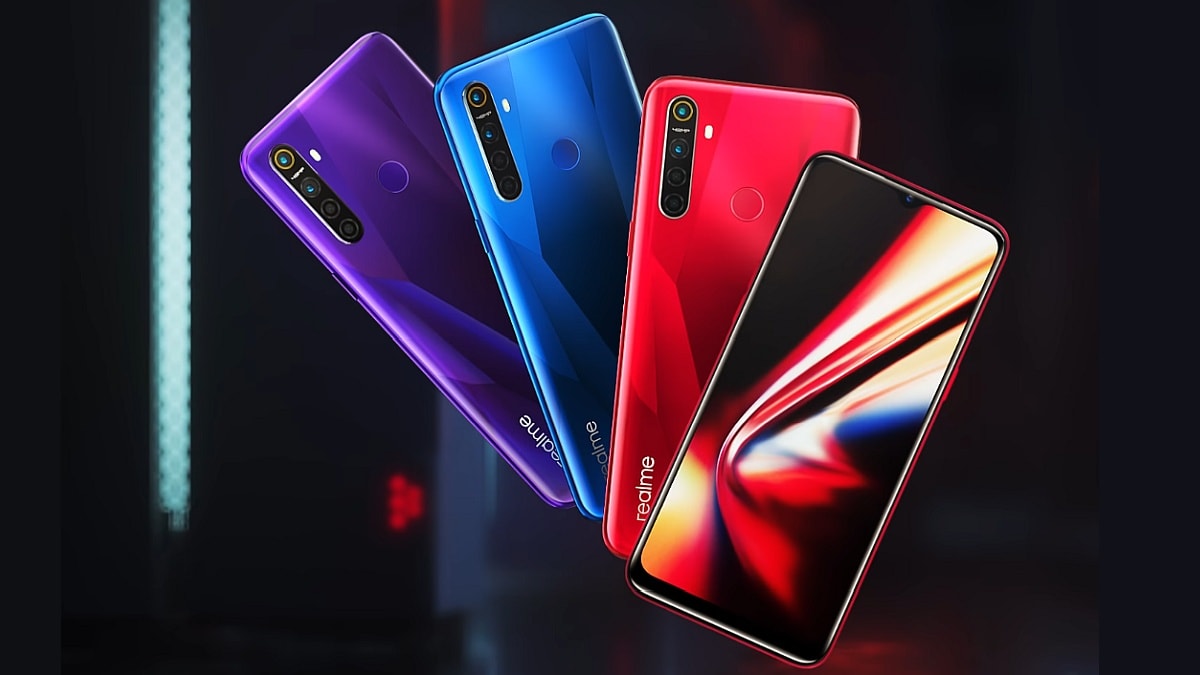 Realme 5s teasers began to emerge this week, and the news of its launch alongside the Realme X2 Pro on November 20 ignited our readers' interest. Other major news from this week include the numerous MIUI 11 updates that began rolling out to older Xiaomi phones. New MIUI 11 features were also revealed in the past 7 days. Lenovo-owned Motorola this week also launched its much-anticipated reimagining of its classic Motorola Razr flip phone – this time, as a foldable Android smartphone with the same iconic form factor. There were also several new WhatsApp features spotted this week, giving us a clue of what the globally popular chat service will get this month.

The Realme 5s will feature a 5,000mAh battery, Realme India CEO Madhav Sheth revealed in a teaser the following day. He also revealed that it will feature a 48-megapixel quad camera setup. As we mentioned, the Oppo spin-off brand soon after also confirmed via a teaser on Flipkart that the Realme 5s India launch would be held on the same day as the Realme X2 Pro – November 20.

The Flipkart teaser also showed off the rear panel design of the Realme 5s, a diamond cut design, something the company has used before on its smartphones. The teaser also touted “ultra detailed pictures that remain sharp even when zoomed in”, highlighting the smartphone's high-resolution 48-megapixel primary camera sensor. In its next teaser, the company also revealed the presence of a waterdop-style display notch on the Realme 5s.

In its last batch of teasers, Realme India revealed that the Realme 5s will sport a 6.51-inch HD+ display, which was a disappointment for some readers as a full-HD+ display was anticipated. The final teaser thus far confirmed that the Realme 5s will be powered by a Snapdragon 665 SoC, a teaser that interestingly enough contained a typo that mistakenly pointed to the use of a heretofore unreleased Qualcomm processor named the Snapdragon 655.

Thanks to the name, we know that the Realme 5s is a new variant of the Realme 5. To recall, the Realme 5 was launched in India in August alongside the Realme 5 Pro. It also featured a quad rear camera setup and a diamond cut rear panel design.

The Realme X2 Pro is the first true flagship of the brand. To recall, the smartphone was launched in China last month, and comes with such highlight features as a Qualcomm Snapdragon 855+ SoC, up to 12GB of RAM, up to 256GB of inbuilt storage, a 90Hz refresh rate Super AMOLED Fluid display, and let's not forget, a 4,000mAh battery with 50W SuperVOOC Flash Charge support – said to charge the phone fully in just 35 minutes.

The India launch date of the Realme X2 Pro was first revealed just a day after the China launch last month. As we mentioned, the Realme X2 Pro will be launched in India on November 20. Since then, earlier this month, Flipkart also teased the availability of the smartphone on its marketplace, tipping that it would be exclusive to the online retailer on launch. Going by past launches though, we can also expect the Realme X2 Pro to be made available via the company site, apart from Flipkart.

None of the above Realme X2 Pro revelations were made in the past week. However, that doesn't mean the company isn't busy promoting it in India ahead of its launch. Part of these promotions were launch event tickets. Why are we talking about such tickets, you may ask. Well, buyers of the launch event tickets (priced at Rs. 299) will get assured goodies worth Rs. 2,100 including a Realme power bank, and an R-Pass worth Rs. 855 – a discount on a purchase of the Realme X2 Pro. The R-Pass also gives interested consumers a guaranteed chance to buy the Realme X2 Pro.

Realme also announced that a ‘Blind Order Sale' for the Realme X2 Pro would be held on Monday, November 18. Interested consumers can pay Rs. 1,000 as a booking deposit ahead of the first sale of the Realme X2 Pro, and be guaranteed a place in the line. Notably, only 855 consumers will be able to make this pre-booking – thus if you're interested in purchasing the phone soon, you should log on early to make the booking.

Vivo this week launched the Vivo S5 in China, a highly anticipated launch. The smartphone features a hole-punch display. Its price starts at CNY 2,698 (approximately Rs. 27,700) and it will go on sale in China from November 22. For now, it remains uncertain when the smartphone will be brought to India.

As we mentioned, Vivo U20 India launch teasers also began this week. The smartphone is expected to be the India variant of the Vivo U3 that was recently launched in China. Thus far, the Vivo U20's teased specifications of a 5,000mAh battery and Snapdragon 675 SoC match.

The week started off with user reports of the Redmi 8 and Redmi 8A receiving their updates, and this was followed by a confirmation by Xiaomi to Gadgets 360 that the rollout had indeed started. Next up, the Redmi Note 6 Pro also started receiving its MIUI 11 update in India – and once again, the company confirmed the rollout to Gadgets 360.

The popular Redmi Note 8 Pro started receiving its MIUI 11 update way ahead of schedule this week, and thus far, we only have user reports to go by, with the company yet to confirm the status of the rollout to Gadgets 360. Also this week, the Redmi 4 got its MIUI 11 update, users reported on Xiaomi's forum. And finally, the week past also saw the Redmi Note 5 Pro get a new MIUI 11 update – this time containing the November Android security patch.

As we mentioned, Xiaomi also unveiled a new feature for MIUI 11 – which can be expected to arrive to Global Stable ROM builds soon. The feature is the anticipated app drawer. To recall, Xiaomi adopts a similar design philosophy to Apple – such that, it is known to forego an app drawer, leaving users to find their apps on multiple home screens instead. Now, users have the option to use an app drawer instead, allowing them to declutter their home screens.

The Motorola Razr was a very popular phone of yesteryear, featuring a sleek frame and a flip form factor. The company has since used the Razr brand for a few Android smartphones, but none that came with the original's flip phone design. After innumerable rumours, teasers, and hints, the Lenovo-owned company this week unveiled the 2019 edition of the Motorola Razr. This time around though, it retains the original's design, but uses modern technology in the form of a flexible or foldable display.

There are no physical keys, but instead, the Motorola Razr 2019 has a single large flexible interior display stretching from the top to the iconic chin at the bottom, and that folds when the phone is folded. There is also a secondary display on the outside, allowing users to check messages and notifications even when the phone is in its folded state. It will go on sale from January 9 in the US, with a price tag of $1,499.99 (roughly Rs. 1,07,400). We know the smartphone is coming to India, as the company has started taking registrations of interest on its India site, however, for now, and India release date or price tag haven't yet been revealed.

As for specifications, the Motorola Razr features Android 9 Pie; a Snapdragon 710 SoC; 6GB of RAM; a primary 6.2-inch flexible OLED HD+ (876x2142 pixels) screen with 21:9 aspect ratio; a secondary 2.7-inch (600x800 pixels) Quick View display; a 16-megapixel f/1.7 camera that serves both as a selfie camera a rear camera; a 5-megapixel dedicated selfie camera; a fingerprint sensor on the bottom chin, and a 2,510mAh battery with 15W fast charging support. Notably, the Motorola Razr 2019 doesn't feature a SIM card slot, and users will have to utilise the eSIM instead.

WhatsApp has had another eventful week. The Facebook-owned instant messaging service this week was spotted with a ‘Dark Default Wallpaper' on the v2.19.327 Android beta app. Unfortunately, the feature was not user accessible, and WhatsApp beta features tracker WABetaInfo spotted it instead. The testing of the new dark wallpaper comes ahead of the rollout of WhatsApp's much-anticipated Dark Theme or Dark Mode. Once WhatsApp gets it, the app will join the hundreds of other popular apps that have in recent times launched Dark Mode features.

Next up, WhatsApp this week with v2.19.328 of the Android beta unveiled a new camera icon in the Status section as well as within the Chat interface. This new icon was visible to beta users. Next up, WhatsApp Android beta v2.19.332 app showed the company was working on a blocked contact notice for chats and categorisation of blocked contacts. Both features are not visible to users of beta at the moment.

At roughly the same time, the WhatsApp iPhone beta v2.19.120.20 app brought a redesigned splash screen that added references to Facebook. Some new elements also hinted at the upcoming launch of the much-rumoured multi-platform system. More dark theme developments were also spotted in beta. Later in the week, WhatsApp was said to be quite close to unveiling its Dark Mode feature for the iPhone app, while the Android v2.19.331 beta brought the redesigned Facebook logo to the splash screen and settings menu.

Airtel and Vodafone Idea results, and other major telecom news

The week past saw both Bharti Airtel and the recently formed Vodafone Idea both release their Q3 (July-to-September period) earnings results. Both companies booked massive losses on provision for payment of adjusted gross revenue (AGR) dues, with levies and interest, in the three-month period that was also stipulated this week by DoT. Vodafone Idea posted a net loss of Rs. 50,900 crores, the largest ever in Indian corporate history. Airtel on the other hand, booked a net loss of Rs. 23,045 crores.

Next up, Tata Sky Binge, the OTT-serving platform recently launched by the DTH operator, this week added Zee5 to its catalogue. Current offerings include such OTT services as Eros Now, Hotstar, Hungama Play, and SunNXT.

Which Is the Best Phone Under Rs. 15,000 in India Right Now?
GoPro Hero 8 Black Review