Realme 5 Pro and Realme 5 India launch may have been the highlight of the week, but there was plenty of other stuff including price cuts for popular phones. 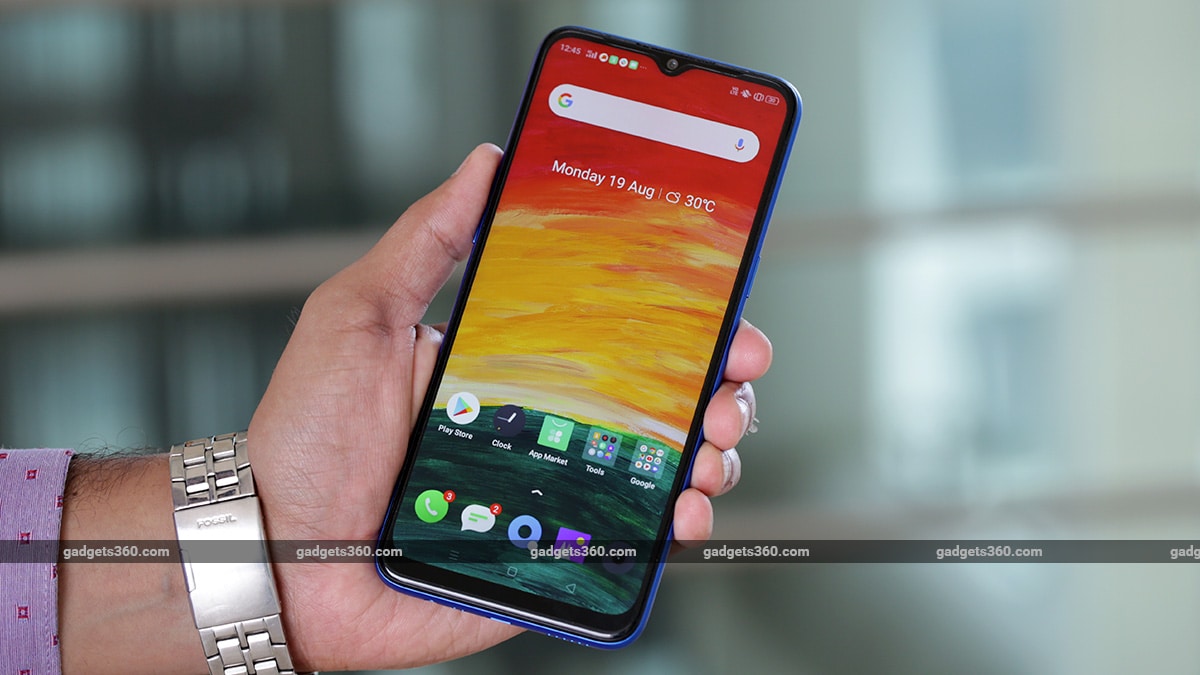 Realme 5 Pro and Realme 5 were launched in India this week, perhaps the biggest news of the past seve days. Another major launch was the Mi A3, the latest Android One smartphone from Xiaomi. The Chinese company also ramped up the teasers for the launch of the Redmi Note 8 and Redmi Note 8 Pro next week, revealing more about them. The Motorola One Action with its ultra wide-angle lens camera made its debut in the country, with the Samsung Galaxy Note 10 series also finally becoming available to buy since its debut earlier this month.

Realme 5 Pro specifications include ColorOS 6.0 based on Android 9 Pie, a 6.3-inch full-HD+ display, Qualcomm Snapdragon 712 SoC, up to 8GB of RAM, a quad rear camera setup (48-megapixel + 8-megapixel + 2-megapixel + 2-megapixel), a 16-megapixel selfie camera, the standard bunch of connectivity options and sensors, up to 128GB of inbuilt storage (expandable via microSD card), and a 4,035mAh.

In contrast, Realme 5 specifications include Color OS 6.0 based on Android 9 Pie, a 6.5-inch HD+ display, Qualcomm Snapdragon 665 SoC, up to 4GB of RAM, a quad rear camera setup (12-megapixel + 8-megapixel + 2-megapixel + 2-megapixel), a 13-megapixel selfie camera, a similar bunch of connectivity options and sensors, up to 128GB of inbuilt storage (expandable via microSD card), and a 5,000mAh battery. , has dimensions of 164.4x75.6x9.3mm, and a weight of 198 grams. There is a fingerprint sensor on the rear panel.

Xiaomi this week launched its latest Android One smartphone in India, the Mi A3. To recall, the smartphone was globally unveiled last month, and as a part of the Android One programme, its highlights include its stock Android interface as well as the promise of speedy version updates. The Mi A3 (Review) has already gone on sale for the first time in India this week, with the second sale set for August 27. Another major USP is its 48-megapixel based triple rear camera setup, 32-megapixel front camera, and its in-display fingerprint sensor.

The Mi A3 has been made available via Amazon, Mi.com, and Mi Home stores in India for now, while it will make its way to other offline stores in the near future. It price starts at Rs. 12,999 for the base variant with 4GB of RAM and 64GB of inbuilt storage option, while the top-end 6GB of RAM and 128GB of inbuilt storage variant is priced at Rs. 15,999. A bunch of launch offers, including cashback for HDFC Bank customers and an Airtel bundled data offer, were announced alongside the Mi A3.

Mi A3 specifications include Android 9 Pie, a 6.08-inch HD+ Super AMOLED display, a Qualcomm Snapdragon 665 SoC, up to 6GB of RAM, up to 128GB storage options (expandable via microSD card), a triple rear camera setup (48-megapixel + 8-megapixel + 2-megapixel), a 32-megapixel selfie camera, the standard bunch of connectivity options and sensors, and a 4,030mAh battery.

The Redmi Note 8 and Redmi Note 8 Pro this week received a launch date, which is August 29. Alongside the two smartphones, Xiaomi will also be launching its Redmi-branded TV at the event. Thus far, Xiaomi has teased details like the Redmi Note 8 Pro sporting a quad rear camera setup with a 64-megapixel camera sensor.

In another bunch of teasers released, Xiaomi revealed that the Redmi Note 8 Pro will support gaming accessories, boast of a liquid cooling feature, a MediaTek Helio G90T SoC, a 4,500mAh battery with 18W fast charging, and 25x zoom capabilities.

Separately, Xiaomi this week announced the start of registrations for the Redmi Note 8 Pro and Redmi Note 8, ahead of their launch next week. It has already seen some incredible numbers, receiving more than a million registrations within a day of opening. The company also shared camera samples highlight the 64-megapixel sensor.

Motorola Mobility this week brought its latest Android One smartphone to India – the Motorola One Action. Launched on Friday, the smartphone's highlight is its triple rear camera with a 117-degree ultra-wide angle lens action camera. The camera allows users to record landscape videos while holding the phone vertically. It also sports a hole-punch display design.

The Motorola One Action price in India is set at Rs. 13,999 for the sole 4GB RAM + 128GB storage variant launched in the country. The smartphone will go on sale via Flipkart from August 30, starting from 12pm (noon) IST. Motorola One Action launch offers include Jio cashback, and additional Jio data.

Samsung India this week officially launched the Galaxy Note 10 series in India. To recall, the Galaxy Note 10 and Galaxy Note 10+ had been launched globally earlier this month, and soon after, the South Korean electronics giant had revealed the duo's pricing in India, while also opening pre-orders. These ended this week, alongside the launch of the smartphones.

Sale offers for the Samsung Galaxy Note 10 and Galaxy Note 10+ were also announced for the smartphones this week, and include bundled data offers Airtel, Jio, and Vodafone-Idea, apart from discounted pricing for the Galaxy Buds when bought alongside the smartphones. HDFC Bank and ICICI Bank customers are also being offered cashback.

A major revelation was made about the next version of Google's Android operating system – Android Q. Google revealed it would be abandoning its practice of giving its Android versions a dessert-based name – something it had started doing with the first publicly available version – Cupcake.

Apart from ditching the name and sticking to only a number, Android 10 also comes with a refreshed logo with the Android robot sitting on top. The logo's colour was also changed from green to black for better visibility, while the font has also been updated. No additional information was disclosed about Android 10 aka Android Q's release date, except that it can be expected in the coming weeks.

Oppo Reno 2 teasers
After announcing an India launch date for the Oppo Reno 2 last week (it is August 28), Oppo this week released several teasers about the smartphone. The Chinese company disclosed that the Oppo Reno 2 will be powered by the Snapdragon 730G SoC and support VOOC 3.0 flash charge technology.

India's Moon mission – Chandrayaan-2 – this week left Earth orbit, and was successfully inserted into a lunar orbit. The Lunar Orbit Insertion (LOI) manoeuvre was completed early this week. Since then, the Indian Space Research Organisation (ISRO) has also completed its second lunar orbital manoeuvre, and the spacecraft also sent back photos of the Moon, showing off the Mare Orientale Basin and Apollo craters. Finally, this week, ISRO also announced that the soft landing of the Vikram lander that's being carried on board Chandrayaan-2 is planned for September 7.

Airtel this week was spotted offering additional data benefits for its V-Fiber broadband customers. It is offering up to 1000GB of additional data on plans with a validity of six months. Eligible plans include Rs. 799, Rs. 1,099, and Rs. 1,599.

Tata Sky this week announced a new offer for those opting for annual payment plans - free additional three to six months of usage. The service definitely seems to be preparing for the launch of Jio Fiber next month.

Next up, D2h launched its Magic Stick media streaming device in the country this week. The streaming stick provides access to streaming services as well as TV shows and original Webs series. It works with the existing D2h set-top boxes.

State-owned telecom operator Bharat Sanchar Nigam Limited (BSNL) this week revised its Rs. 1,098 prepaid plan in select circles, reducing its validity from 84 days to 75 days. The plan now offers 375GB of data for the period. Other benefits include unlimited voice calling, 100 SMS messages per day, and PRBT services as well.

Facebook finally releases its Clear History tool
After being announced last year, Facebook this week finally released its Clear History tool, though it had been rebranded to ‘Off-Facebook Activity'. The tool lets users limit the data Facebook can gather on you from outside websites and apps. For now, the tool is only available in select markets, but will be made available in other countries in the "coming months."

Separately, Facebook this week confirmed it had started paying its content moderators in India more money. The moderators work for Facebook contractor Genpact in India, and the move looks to be a sign of improvement for workers after reports of stressful conditions at the social network's sites globally.

From Frozen 2 to Soul: All the Disney Animation and Pixar Announcements From D23 Expo
Russian Capsule Carrying Humanoid Robot Fails to Dock With Space Station