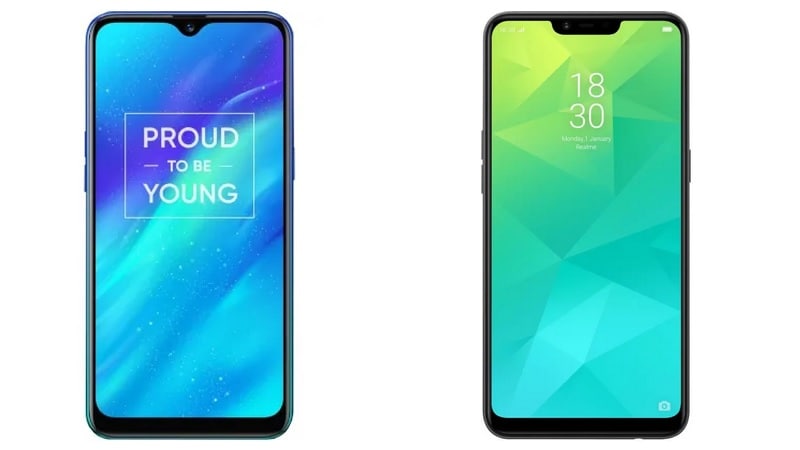 After a lengthy spell of teasers, Realme on Monday finally launched the company's latest smartphone - the Realme 3. The latest Realme offering introduces a new design language and brings upgraded imaging hardware. The Realme 3 also ditches the Qualcomm processor powering its predecessor - the Realme 2 – and features the MediaTek Helio P70 ticking at its heart. Moreover, it also boots the latest build of Android and brings some new camera features to the table. The Realme 3 will be available in two memory configurations exclusively from Flipkart starting March 12, 2019. Let's compare it with the Realme 2 to find out what's new and different.

Realme 3 vs Realme 2 price in India

The Realme 3's pricing will come as a sigh of relief for Realme 2 buyers who want to upgrade. The Realme 3 carries a price tag of Rs. 8,999 for the 3GB RAM + 32GB internal storage variant, while the higher-end 4GB + 64GB version has been priced at Rs. 10,999. The smartphone will be available exclusively from Flipkart and the official Realme website and will go on sale for the first time at 12pm (Noon) IST on March 12, 2019. The Realme 3 comes with a host of launch offers which include a discount of Rs. 500 to HDFC Bank card-holders, benefits worth Rs. 5,300 to Jio subscribers, and 20 percent SuperCash on MobiKwik for purchases made from the Realme website.

On the other hand, the Realme 2 carried a slightly lower price tag of Rs. 8,990 for the 3GB RAM + 32GGB internal storage variant and Rs. 10,990 for the 4GB + 64GB model. Needless to say, the company has kept the pricing at the same level, making it easier for Realme 2 users to jump onto the upgrade ship.

The most noticeable change brought by the Realme 3 is the 3D gradient unibody design, marking the debut of the en vogue gradient trend in the company's smartphone portfolio. The Realme 3 comes in Dynamic Black, Radiant Blue, both of which flaunt a gradient design, while the Classic Black has a glossy rear panel finish clad in plain black. The Realme 2, on the other hand, came in Diamond Black, Diamond Blue, and Diamond Red colour options that had 15 tangent planes carved onto the back panel to create the diamond cut effect.

Under the hood, the biggest change comes in the form of MediaTek processor in the place of a Qualcomm processor. The Realme 3 is powered by the octa-core MediaTek Helio P70 SoC paired with up to 4GB of RAM and 64GB of internal storage. The Realme 2 on the other hand, drew power from the octa-core Qualcomm Snapdragon 450 SoC paired with the same amount of RAM and internal storage. Both the smartphones offer a peak expandable storage limit of 256GB, both with dedicated microSD card slots.

The Realme 3 packs a dual rear camera setup that consists of a primary 13-megapixel rear sensor with an f/1.8 aperture and a 2-megapixel secondary sensor. Camera features include PDAF, Nightscape mode, Hybrid HDR, Chroma Boost, Portrait Mode, and scene recognition among others. On the front is a 13-megapixel sensor with an f/2.0 aperture and 1.12-micron pixels that offers features such as AI Beautification, HDR, and AI Face Unlock.

The Realme 2 also comes equipped with a dual rear camera setup that comprises of a 13-megapixel primary sensor with a smaller f/2.2 aperture and a 2-megapixel secondary sensor, while selfies are handled by an 8-megapixel sensor with an f/2.2 aperture and 85-degree field of view. Battery capacity on both the smartphones remains the same at 4,230mAh, just like the connectivity options. New features introduced by the Realme 3 include the Riding Mode, Match Cards on AI Board, and Camera2 API support among others.