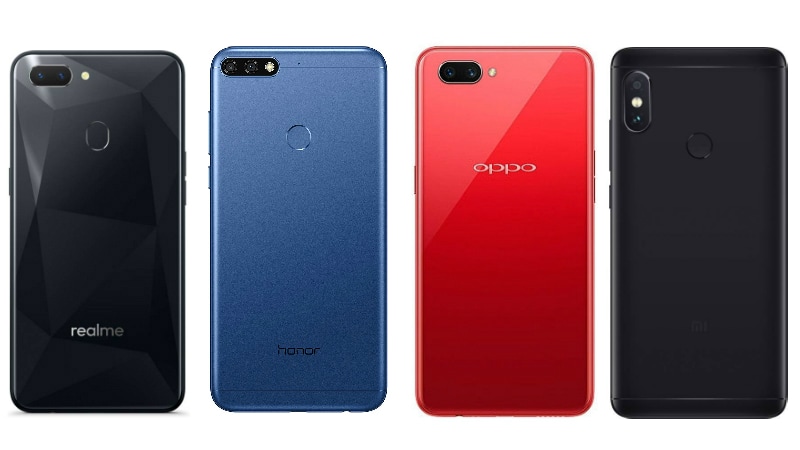 Realme 2 has been launched in India, bringing the second handset by the brand to the country. The new Realme 2 brings a Snapdragon processor and dual rear camera setup to the fold, and retaining the diamond cut design on the back panel from the first model. The new smartphone still comes in three colour options but reduced the number of variants to two. The handset also offers fingerprint sensor along with Face Unlock, along with a big 4,230mAh battery. Of course, the Realme 2 price in India puts it squarely in competition with the popular Xiaomi Redmi Note 5 smartphone, along with the likes of Oppo A3s and Honor 7C. We take a look at the differences between the four smartphones in terms of price as well as specifications to help you figure out the difference between them.

Ahead of launch, Realme had teased that the smartphone will be priced around the the Rs. 10,000 mark, and sure enough the Realme 2 price in India is set at Rs. 8,990 for the 3GB RAM/ 32GB inbuilt storage variant and Rs. 10,990 for the 4GB RAM/ 64GB storage model. It will be available exclusively on Flipkart in Diamond Black and Diamond Red colour options starting September 4. The Diamond Blue colour option will go on sale sometime in October. The Realme 2 has several launch offers listed, including no-cost EMI options, Rs. 750 discount on HDFC Bank credit and debit card purchases, as well as up to 120GB additional data and benefits worth up to Rs. 4,200 from Reliance Jio.

On the other hand, the Xiaomi Redmi Note 5 is priced in India at Rs. 9,999 for the 3GB RAM/ 32GB storage variant, and Rs. 11,999 has been set for the 4GB RAM/ 64GB storage model. Available in Black, Gold, Blue, and Rose Gold colour options, the Redmi Note 5 is available via Flipkart, Mi.com, and Mi Home stores.

The Redmi Note 5 has a 12-megapixel rear camera sensor with an f/2.2 aperture and an LED flash and a 5-megapixel front camera sensor with an LED selfie-light module. It comes in 32GB and 64GB storage options that both are expandable via microSD card. It has 4G VoLTE, Wi-Fi 802.11 b/g/n, Bluetooth, 3.5mm headphone jack, and Micro-USB on the connectivity front and pack a 4000mAh battery that supports 5V/2A fast charging.

The Oppo A3s also has a dual-SIM (Nano) slot and runs on ColorOS 5.1 based on Android 8.1 Oreo. It sports a 6.2-inch HD+ (720x1520 pixels) 'Super Full Screen' display, and is powered by an octa-core Snapdragon 450 SoC coupled with 2GB of RAM. The A3s bears a dual rear camera setup, with a 13-megapixel primary sensor and 2-megapixel secondary sensor. On the front, it bears an 8-megapixel sensor while the company is touting the presence of its AI Beauty Technology 2.0 features for beautification.

The Oppo A3s bears 16GB of inbuilt storage that is expandable via microSD card (up to 256GB) in a hybrid dual-SIM configuration. It is powered by a 4230mAh battery, measures 156.2x75.6x8.2mm and weighs 168 grams. Sensors on board include an accelerometer, ambient light sensor, and proximity sensor. Connectivity options on the Oppo A3s include 4G VoLTE, Wi-Fi, Bluetooth, GPS/ A-GPS, 3.5mm headphone jack, and Micro-USB. There is no fingerprint sensor on board, and users will have to rely on the Face Unlock feature.

The Honor 7C bears a dual rear camera setup with a 13-megapixel primary sensor and a 2-megapixel secondary sensor. On the front, the smartphone sports an 8-megapixel selfie camera with f/2.0 aperture and a soft selfie light. It has a 3,000mAh battery under the hood, and comes packed with Huawei's Histen 3D sound effects, and a Ride mode for motorcylists. Sensors onboard the Honor 7C include an accelerometer, ambient light sensor, and a proximity sensor. Connectivity options on the handset include 4G VoLTE, Wi-Fi 802.11 b/g/n with hotspot, Bluetooth 4.2, GPS/ A-GPS, a Micro-USB port, and a 3.5mm headphone jack. There's fingerprint scanning support at the back.