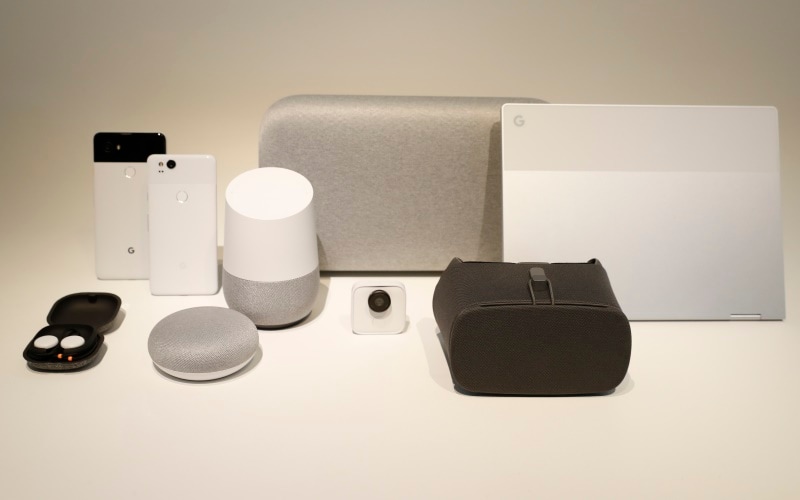 Google on Wednesday unveiled new versions of its Pixel smartphone, the highlight of a refreshed line aimed at weaving artificial intelligence deeper into modern lives.

The new Pixel 2 and larger Pixel 2 XL are the first Google-made phones to be released since the California tech giant announced the acquisition of key segments of Taiwan-based electronics group HTC.

The new aluminum-body smartphones along with Google's upgraded connected speakers and new laptop computer all aim to infuse artificial intelligence to make the devices more user-friendly, built around the Google Assistant - the rival to Amazon's Alexa, Microsoft's Cortana and others.

Google vice president Rick Osterloh said Google's new devices "are simple to use and they anticipate your needs."

Osterloh told the product launch event in San Francisco: "You interact with your devices naturally with your voice or by touching them."

Google, by bringing in a team of engineers from HTC, aims to emulate the success of Apple iPhones by controlling the hardware as well as the software used in the premium-priced handsets.

The revamped camera in the smartphone retains a single lens, but seeks to improve images via "computational photography," an artificial intelligence tool that can enhance pictures.

Analyst Ian Fogg of IHS Markit said in a tweet that the new smartphone "adds incremental improvements on the great v1" while noting that "Google's challenge is to solve production limits which hurt the original."

Fogg said the use of computation to improve images with a single lens "is technically impressive."

The new Google Home Mini is available for pre-order in the seven countries where the device is offered, and will go on sale in stores October 19, the company said.

The new speaker, which responds to voice commands using artificial intelligence, is less than half the price of Google's first generation speaker and makes this "more accessible to more people," said Google hardware designer Isabelle Olsson.

The new Google Clips camera - one of the surprises of the event - "looks for smiles (and) moments, because the software is in the camera," said Google product manager Juston Payne.

"It's like having my own photographer shooting and choosing my best moments for me," Payne said of the $249 (roughly Rs. 16,000) device.

Another surprise from the event was the wireless Pixel Buds, which can deliver audio from a smartphone and also include the Google Assistant and real-time translation.

A demonstration at the event included a two-way conversation with one person speaking English and the other Swedish.

"The camera and the earbuds were really held up as examples of what the company can do by leveraging the Google Assistant," said Ross Rubin of Reticle Research.

A new Pixelbook laptop was touted as a "high performance" computer powered by its Chrome operating system and designed as a rival to Microsoft's Surface and Apple's iPad Pro.

With a 12.3-inch display, the device is a convertible PC that can be used as a tablet and is sold starting at $999 for US customers.

"We've been working hard continuing our shift from a mobile-first to an AI-first world," he said.

"We are working on software and hardware together, because that is the best way to drive computing forward."

The launch comes in the wake of Apple's announcement of a new line of iPhones, and Amazon's upgrades to its Echo speakers powered by its Alexa digital assistant

"It is a portfolio designed to take Google into more parts of your life, particularly in your home," Reticle Research analyst Ross Rubin said of the array of devices the Internet giant unveiled on Wednesday.