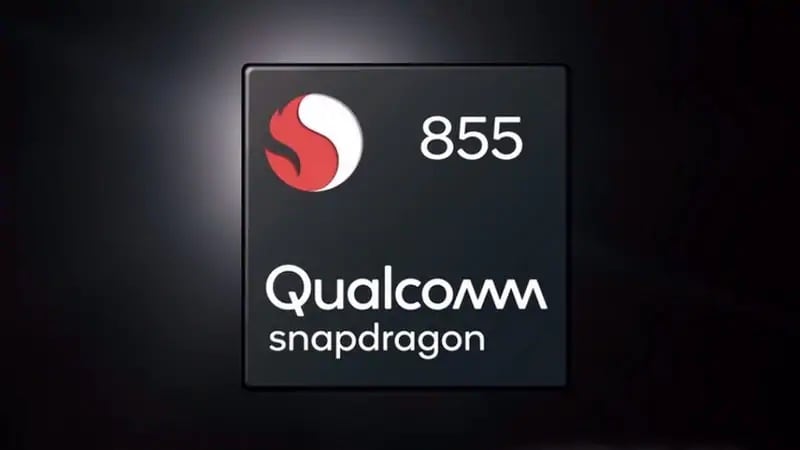 Snapdragon 855 is Qualcomm's top-end offering that powers the 2019 Android flagships.

1. Samsung Galaxy S10
The Samsung Galaxy S10 is the South Korean electronics giant's vanilla flagship, packing a 6.1-inch QHD+ Curved Dynamic AMOLED Infinity-O Display with 19:9 aspect ratio. It is powered by the Snapdragon 855 SoC (Exynos 9810 in some regions) paired with 8GB of LPDDR4X RAM and up to 512GB of internal storage. It packs a 12-megapixel wide-angle camera, a 12-megapixel telephoto lens and a 16-megapixel ultra-wide lens, while a 10-megapixel front camera takes care of selfies. The device draws power from a 3,400mAh battery with support for fast charging, while security is handled by an ultrasonic in-display fingerprint sensor. In regions outside the US and China, the company has launched the smartphone with the Exynos 9820 SoC.

3. Samsung Galaxy S10e
The most affordable device of the Galaxy S10 trio, the Samsung Galaxy S10e packs a smaller 5.8-inch full-HD+ Flat Dynamic AMOLED Infinity-O display and misses out on the in-display fingerprint sensor. It is powered by the same Qualcomm or Exynos processor as its larger siblings, paired with up to 8GB of RAM and 256GB of internal storage. The camera setup comprises of a 12-megapixel primary camera accompanied by a 16-megapixel secondary camera on the rear, while selfies are handled by a 10-megapixel camera. The Galaxy S10e comes equipped with a 3,100mAh battery.

6. Xiaomi Mi 9
The Xiaomi Mi 9 sports a 6.39-inch full-HD+ Samsung AMOLED display, and is powered by the Snapdragon 855 processor paired with up to 8GB of RAM and 128GB of internal storage. There is a fifth-generation in-display fingerprint sensor for authentication. In the camera department, the Xiaomi Mi 9 comes equipped with a 48-megapixel Sony IMX586 primary sensor, 16-megapixel Sony IMX481 secondary sensor, and a 12-megapixel telephoto lens, while selfies are taken care of by a 20-megapixel camera. The Xiaomi offering packs a 3,300mAh battery which supports 20W wireless charging and 27W wired fast charging.

9. Black Shark 2
The latest gaming phone Black Shark, the Black Shark 2 sports a 6.39-inch full-HD+ (1080x2340 pixels) AMOLED display, while under the hood, there is 12GB of RAM and 256GB of onboard storage. The Black Shark 2 features a 48-megapixel primary sensor and a 12-megapixel secondary camera, while a 20-megapixel camera on the front takes care of selfies. A 4,000mAh battery provides the juice for gaming sessions, while the Liquid Cool 3.0 liquid-cooling technology handles the thermals.

10. Oppo Reno 10x Zoom Edition
The flagship Oppo Reno 10X Zoom Edition with a side-swing pop-up module features a 48-megapixel primary camera, assisted by a 13-megapixel secondary sensor with a periscope telephoto lens, and an 8-megapixel super wide-angle lens. Powered by the flagship Qualcomm chipset, it packs up to 8GB of RAM and 256GB of internal storage. The display is a 6.65-inch full-HD+ Super AMOLED panel with HDR10+ compliance, and it is lit by a 4,065mAh battery which has support for Oppo's proprietary VOOC 3.0 fast charging technology.

11. Sony Xperia 1
The Sony Xperia 1 marks the beginning of a new flagship line of smartphones for the company. The Snapdragon 855-powered Sony Xperia 1 comes with a 6.5-inch 4K HDR (1644x3840 pixels) OLED CinemaWide display with a 21:9 aspect ratio. In the camera department, it features a 12-megapixel primary camera, assisted by a 12-megapixel wide-angle lens and a 12-megapixel telephoto lens with optical zoom. There is 6GB of RAM paired with 128GB of storage, while a 3,300mAh battery keeps the lights on.

12. LG G8 ThinQ
Flaunting a MIL-STD 810G and IP68-rated build, the LG G8 ThinQ comes with support for Air Gestures for accomplishing tasks like switching apps and adjusting the volume. The display is a 6.1-inch QHD+ (1440x3120 pixels) OLED FullVision panel with 19.5:9 aspect ratio. Under the hood, the Snapdragon 855 is paired with 6GB of RAM and 128GB of internal storage, while drawing power from a 3,500mAh battery with fast charging support. On the rear, it packs a 12-megapixel primary camera, a 16-megapixel 107-degree super wide-angle lens, and a 12-megapixel 45-degree telephoto lens with an f/2.4 aperture and a 1-micron pixel sensor.

13. LG G8s ThinQ
The LG G8s ThinQ packs a slightly larger 6.2-inch full-HD+ (1080x2248 pixels) display with 18.7:9 aspect ratio, while its Snapdragon 855 processor ticks alongside 6GB of RAM and up to 128GB of internal storage. The rear imaging hardware comprises of a 12-megapixel primary sensor, a 13-megapixel wide-angle sensor, and a 12-megapixel telephoto lens, while selfies are handled by an 8-megapixel camera. It too has Hand ID and Air Motion support like the G8 ThinQ, and packs a 3,550mAh battery.

Price: To be announced

14. LG V50 ThinQ 5G
The first 5G-ready smartphone from the company, the LG V50 ThinQ 5G sports an HDR 10-compatible 6.4-inch QHD (1440x3120 pixels) OLED FullVision display with 19.5:9 aspect ratio. Under the hood is the Snapdragon 855 paired with 6GB of RAM and 128GB of onboard storage, while the battery is a 4,000mAh unit with Quick Charge 3.0 support. It comes equipped with a 12-megapixel primary camera, a 12-megapixel telephoto lens, and a 16-megapixel wide-angle lens, while on the front, there is an 8-megapixel RGB sensor accompanied by a 5-megapixel wide-angle lens.

15. Vivo iQoo
The first smartphone from Vivo's iQoo sub-brand, the eponymous Vivo iQoo flaunts a 6.41-inch full-HD+ (1080x2340 pixels) AMOLED display with a waterdrop notch. Assisting the Snapdragon 855 processor inside the glass body is up to 12GB of RAM and 256GB of storage, while a large 4,000mAh battery with support for Vivo's Super Flash Charge technology keeps things running. The gaming-centric device packs a 12-megapixel primary, a 13-megapixel wide-angle camera, and a 2-megapixel depth sensor, while a 12-megapixel camera is on the front.

16. ZTE Axon 10 Pro 5G
The ZTE Axon 10 Pro 5G comes equipped with a 6.47-inch Full HD+ AMOLED display with a waterdrop notch, while the Snapdragon 855 SoC at its heart ticks alongside 6GB of RAM and 128GB of internal storage. For photography, there is a 48-megapixel rear camera on the rear, sitting alongside a 20-megapixel ultra-wide-angle lens and an 8-megapixel telephoto lens, while the front snapper is a 20-megapixel sensor.

Price: To be announced

17. Lenovo Z5 Pro GT
Touted to be the world's first Snapdragon 855-powered smartphone, the Lenovo Z5 Pro GT packs a 6.39-inch full-HD+ (1080x2340 pixels) Super AMOLED display with 19.5:9 aspect ratio. As for the internal specifications, there is up to 12GB of RAM and 512GB of storage, while the battery capacity is 3,350mAh. The rear camera set-up consists of a 24-megapixel primary camera and a 16-megapixel secondary camera, while the front features a 16-megapixel primary camera assisted by an 8-megapixel IR sensor.

18. Energizer Power Max P8100S
The Energizer Power Max P8100S is a 5G-ready foldable smartphone, which packs a 6-inch full-HD+ (1080x2160 pixels) cover display and an 8.1-inch foldable display with a resolution of 1536x2048 pixels and 4:3 aspect ratio. The Snapdragon 855 SoC under the hood is accompanied by up to 8GB of RAM and 128GB of internal storage, while a massive 10,000mAh battery keeps the lights on. There is a 48-megapixel primary rear camera sitting alongside a 12-megapixel sensor, while selfies are taken care of by a 24-megapixel front camera.

1. Google Pixel 4
The Pixel 4 has already been spotted multiple times in Android Open Source Project (AOSP) commits and is tipped to bring improved dual-SIM functionality. While not much is known about its hardware specifications, it will almost certainly pack the flagship Qualcomm chipset, probably the Snapdragon 855, and is expected to make its debut around October later this year.

2. OnePlus 7, OnePlus 7 Pro
The OnePlus 7 is tipped to launch on May 14 and will reportedly be powered by the Snapdragon 855 SoC. Alleged case renders indicate that the next OnePlus offering will sport a pop-up selfie camera, dual primary microphones, triple rear cameras, while purported hands-on images depict a full-screen display with a very small chin. The company's chief has already confirmed that the OnePlus 7 won't have support for wireless charging, which is quite disappointing. A smartphone called OnePlus 7 Pro has also been tipped in recent times, and should be powered by the Snapdragon 855 SoC as well.

3. Asus ZenFone 6Z
Asus is all set to launch its next flagship, the ZenFone 6, on May 16, but a variant of the device – tipped to be the ZenFone 6Z – was recently spotted on Geekbench. As per the benchmark listing, the ZenFone 6Z will be powered by the Snapdragon 855 SoC paired with 6GB of RAM and will run Android Pie. The device has reportedly received its Wi-Fi certification ahead of its launch, but there is no word on other details like camera hardware, battery capacity, and internal storage among others.

5. Poco F2
Xiaomi has teased that the Poco F2 might be launched before June this year, but details on other specifications are still under wraps. The device is rumoured to come equipped with the Snapdragon 855 SoC, and as per a concept render, it will sport a waterdrop notch and dual rear cameras.

6. Samsung Galaxy Note 10
The Samsung Galaxy Note 10 is rumoured to come equipped with the Snapdragon 855 SoC, and will reportedly sport quad rear cameras. A 5G-ready model is also tipped to be in the pipeline, and it might be available in four variants with two different display sizes. It is also being reported that the Galaxy Note 10 will ditch the physical buttons in favour of force touch.

7. Motorola Moto Z4
As per an alleged Moto Z4 render, the upcoming Motorola flagship will feature a single 48-megapixel camera and will sport a waterdrop notch. An in-display fingerprint sensor and support for Moto Mods have also been tipped, with one them being the 5G Moto Mod. It will reportedly be powered by the Snapdragon 855 SoC and will retain the 3.5mm headphone jack.

8. Meizu 16s
The Meizu 16s was recently sighted on the TENAA database with specifications such as a 6.2-inch AMOLED display, a 3,540mAh battery with 24W fast charging support, and an octa-core processor clocked at 2.8GHZ (tipped to be the Snapdragon 855) paired with 8GB of RAM and 128GB of internal storage. It will reportedly flaunt a notch-less design and might feature a 48-megapixel rear camera, a 20-megapixel selfie snapper, and is expected to be launched on April 23.