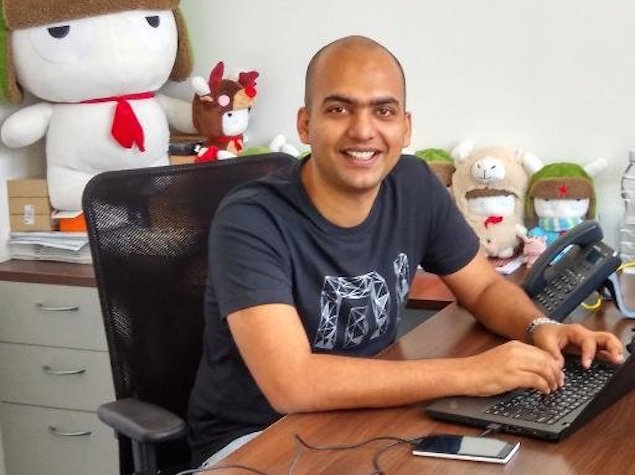 1. Describe your technology setup - what computer/ phone/ tablet/ camera/ gaming console/ other gadgets do you use?
Manu Jain: The [Xiaomi] Mi 3 and Redmi 1S. I get almost all of my work done on these gadgets. I use three home screens [on my phones] - one for essential apps, the second for apps I use once or twice a day like social network apps, and the third for apps I don't use that often.

2. What are three apps (mobile/ tablet or PC/ Mac) you couldn't live without?
Manu Jain: These are the basic apps, which I have on the first home screen on my phones. If you ask me to pick three, I'd go for MIUI Mail, MIUI Calendar and WeChat. I also use WhatsApp, but WeChat is more popular among my friends and colleagues in China, so I use it more often.

3. What is one gadget (other than your phone) you never travel without?
Manu Jain: It used to be a tab[let] for content consumption, like watching movies, reading and playing games, and mostly because I wanted to travel light. My laptop was too bulky. But I've stopped carrying the tablet with me while travelling because I find that the big-screen phone [Mi 3] is good enough for my usage.

4. What is your dream gadget/ technology setup?
Manu Jain: I am a big fan of Iron Man. My dream technology setup would be a house like the one Iron Man has, with the cool voice assistant too. I like Iron Man because he is a self-made superhero. I became a huge fan of Iron Man fairly recently. I still like Batman and Super Commando [Dhruva] from Raj Comics. I wouldn't mind having all the technology Batman has either.

5. How has technology changed the way you work?
Manu Jain: I graduated from IIM Calcutta in 2007. Back then I had a feature phone. My wife worked with Nokia and she taught me how to access the Internet on mobile phones. I joined McKinsey, where they allowed email to be accessed only on certain phones. I bought one of those phones. From there to doing all my work-related stuff on my phone, it has come a long way.

My grandfather, he's about 95 [years old] now. For 93 years of his life, he was offline. Then we gave him a tab and he started using the Internet. A laptop or a desktop was too complicated for him. With a tablet, he just has to tap a button to switch it on and simply tap one icon to start Skype and other apps. It has become so easy. My dad was [also] quite averse to using the Internet earlier. He refused to use Google Maps. After we gifted him a smartphone, every time he drives to an unknown place, the first thing he does is open Google Maps on his phone. Things have come a long way.

iPhone 6, iPhone 6 Plus China Bookings Hit 2 Million in 6 Hours: Reports
How to Prolong the Battery Life of Your Smartphone, Tablet, and Laptop