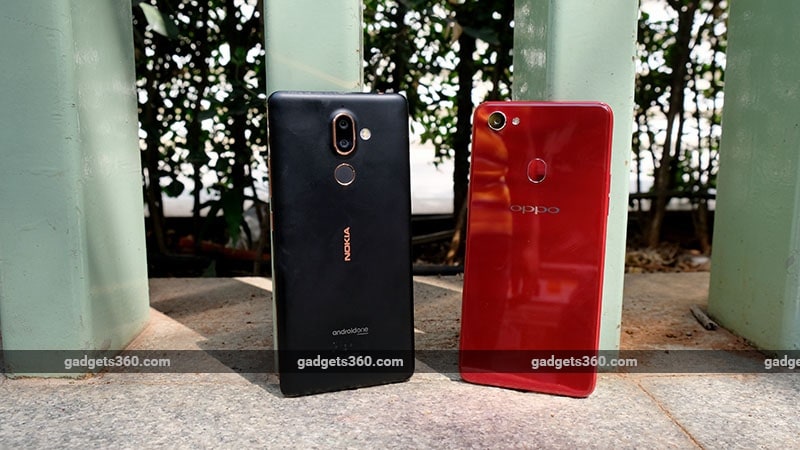 Smartphone manufacturers have been very aggressive in the Rs. 10,000 to 20,000 segment, and as a result buyers have a lot of options to choose from. The same cannot be said about the next price band. Few manufacturers have recently launched new devices priced between Rs. 20,000 and Rs. 30,000, and the market has been a little dry. What most buyers find in this segment is last year's flagships that have reduced in price thanks to manufacturer or e-commerce discounts. However, things have gotten better recently. In the recent past we have seen big launches from Vivo, Oppo and HMD Global in the form of the Vivo V9 (Review), Oppo F7 (Review), and Nokia 7 Plus (Review) respectively.

The Vivo V9 and the Oppo F7 have managed to grab a lot of attention thanks to their iPhone-like screen notches. We have already compared the two phones and found that the Oppo F7 is the better option. Now, with Nokia’s newest entrant, we pit the Oppo F7 against the Nokia 7 Plus to see if it can hold on to that title.

Oppo F7 vs Nokia 7 Plus: Design

Each smartphone here has taken a different approach when it comes to design. The Oppo F7 is made primarily out of plastic while the Nokia 7 Plus has a metal unibody. HMD Global has also gone a step further to coat the back with ceramic to give it a premium feel. The Nokia 7 Plus is heavier than the Oppo F7 which could be because of its bigger battery rated at 3800mAh compared to the 3400mAh battery in the F7.

Out of the two, it is the Nokia 7 Plus that looks and feels premium, the ceramic coating at the back is smooth to the touch and we did not find it slippery during our use. The plastic build quality of the Oppo F7 feels cheap in comparison, and is more prone to picking up scratches over time. The novelty for the Oppo F7 is the notch and the big display which gives the phone a higher screen to body ratio. If you wish to embrace the notch, the Oppo F7 is your only option among the two. But the Nokia 7 Plus would be our pick because it feels like it is built to last.

At the front, the Oppo F7 has a 6.23-inch display with a notch and a 19:9 aspect ratio, while the Nokia 7 Plus has a 6-inch display with an 18:9 aspect ratio. Both phones have a fingerprint scanner at the back, but the 7 Plus has a dual camera setup compared to the single camera on the F7. Each phone has a different port - the Oppo F7 has a Micro-USB port while the Nokia 7 Plus uses the more modern USB Type-C port.

Oppo F7 vs Nokia 7 Plus: Specifications and software

The Nokia 7 Plus has a 6-inch display while the Oppo F7 has a slightly bigger 6.23-inch display. Both screens have full-HD+ resolutions and offer decent viewing angles. But we like the display on the Nokia 7 Plus since it has better brightness levels and is slightly more vivid in comparison. HMD Global has used the Snapdragon 660 processor for the 7 Plus making it the first phone in India with this SoC.

You do have the option to expand storage on both these smartphones using microSD cards of up to 256GB. However, you will have to sacrifice the second SIM on the Nokia 7 Plus because of the hybrid dual-SIM design, while the F7 has a dedicated microSD card slot. Both devices support 4G and VoLTE but the 7 Plus has better connectivity options. It has Bluetooth 5.0 rather than Bluetooth 4.2, and it also has NFC, which the Oppo lacks. However, the Nokia 7 Plus misses out on FM radio which could be a dealbreaker for some people while the Oppo F7 has this feature.

Software is where the phones have some major differences. While both phones run Android Oreo out of the box, Oppo has gone with its custom ColorOS UI skin while HMD Global has enrolled the Nokia 7 Plus into Google’s Android One programme. This means that the 7 Plus runs stock Android without any bloatware. The same cannot be said about the Oppo F7, which has a fair number of preinstalled apps, only some of which can be uninstalled to reclaim storage. We like stock Android, and we found that Oppo’s UI felt dated when we reviewed the F7. Yes, it has a lot of features including iPhone X-like gesture-based navigation, but it is the Nokia 7 Plus that wins this segment for us.

Oppo F7 vs Nokia 7 Plus: Performance

In our time spent with the Oppo F7, we have found it to be significantly faster than the Vivo V9 and the Moto X4 (Review). We also have not faced any lag or stutter with it in day-to-day use. We were impressed with its performance, especially considering its price. However, our benchmarks show that the Nokia 7 Plus performs slightly better than the F7. In AnTuTu, it scored 137,573 points compared to Oppo’s 135,279. In Geekbench 4, it scored 1,590 and 5,780 compared to the F7’s 1,523 and 5,798 in the single-core and multi-core benchmarks respectively. These and our other scores are very close, but they do tend to be slightly in favour of the Nokia 7 Plus.

Oppo’s custom UI might take some time getting used to, and it does have a few quirks that we have described in our review. The 7 Plus runs stock Android and if you are purist, you will feel at home. Battery performance on both these devices is good, but we found that the Oppo F7 lasted 17 hours and 13 minutes in our HD video loop test compared to 13 hours and 31 minutes for the Nokia 7 Plus despite the difference in their battery capacities favouring the 7 Plus. This could be down to the fact that the 7 Plus has a brighter display compared to that of the Oppo F7. General battery performance is quite good, and we found that both phones can last a day if you use them for social media apps and messaging with a bit of gaming on the side. Charging is faster for the Nokia 7 Plus thanks to a bundled fast charger, while the Oppo F7 has a 10W charger in the box.

Oppo F7 vs Nokia 7 Plus: Cameras 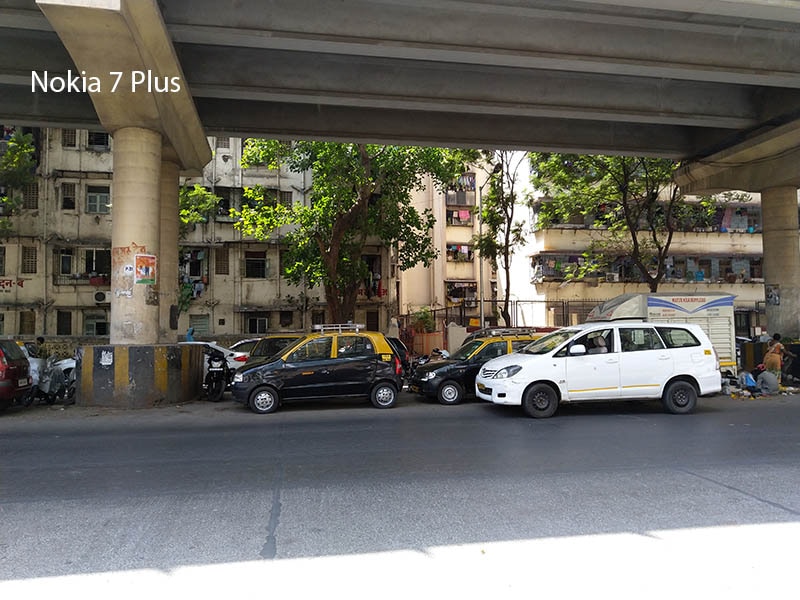 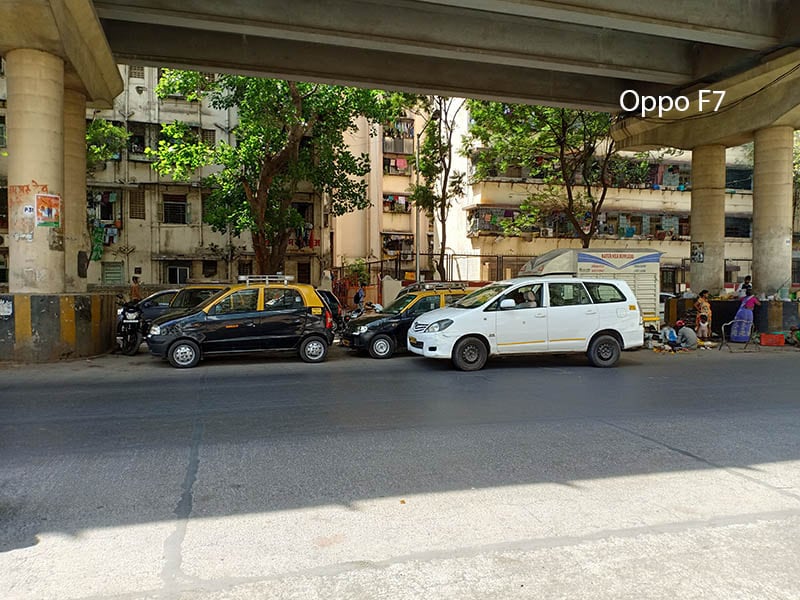 We shot the same scenes with both the phones at the same time to see how they fare. We found that the Nokia 7 Plus manages to capture details better than the Oppo F7. When zooming into our sample shots, we saw that the 7 Plus is slightly better when it comes to colour accuracy. Portrait mode is where it takes a bigger lead by putting the secondary camera to use, resulting in better edge detection, and more usable shots. One other benefit the 7 Plus has over the Oppo is its 2X optical zoom capability, which can really come in handy. Low light performance isn’t great with either of these phones, but once again the Nokia 7 Plus seems to have the edge, delivering more consistent results with marginally better details. Both phones have Pro modes that let you alter camera settings before taking shots. The Oppo F7 has an Ultra HD mode that stitches four exposures together to deliver a single high-res image, while the Nokia 7 Plus has the “Bothie” feature that lets you use both the front and the rear cameras at the same time. 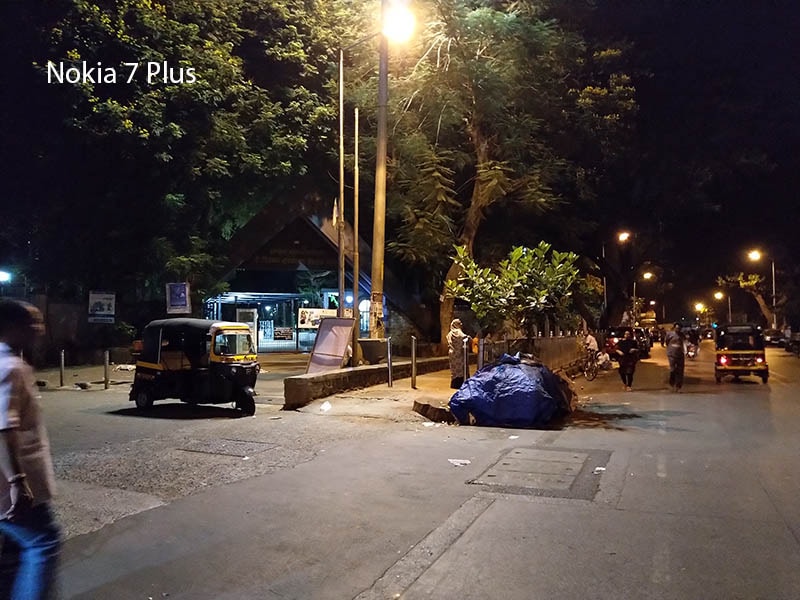 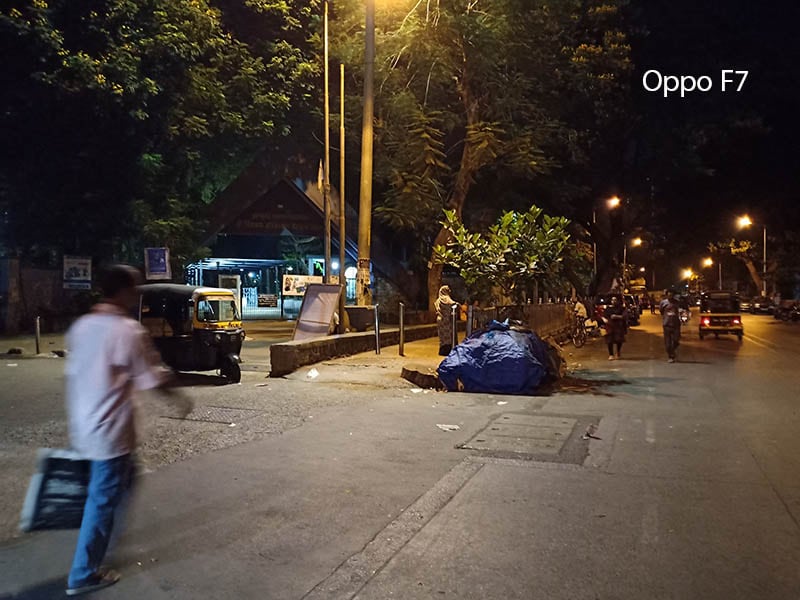 The Oppo F7 boasts of AI assistance for selfie enhancement, while the Nokia 7 Plus just has a beautification mode. With its AI, the Oppo phone automatically sets the level of beautification while Nokia gives you to a slider to tweak it manually. Overall, we liked the mild enhancements that the 7 Plus made, compared to the aggressive smoothening of the Oppo F7's software. The Nokia 7 Plus also edges ahead in terms of video recording and is capable of recording at 4K. Both contenders can shoot 1080p video, but the 7 Plus has electronic image stabilisation, while the Oppo F7 doesn’t.

Verdict
While the Oppo F7 did manage to beat the Vivo V9, it loses out to the Nokia 7 Plus. However, these phones aren’t priced exactly the same, and the Nokia 7 Plus commands a premium of about Rs. 4,000 for the same configuration with 4GB of RAM and 64GB of storage. Is it worth that much more? We think it is, because of its more powerful hardware, premium build quality, better cameras, and stock Android with the guarantee of updates for two years. The 6GB RAM/ 128GB storage variant of the F7 - which we haven't had the chance to test yet - might be able to inch ahead of the Nokia 7 Plus in terms of performance but all the other factors still make the Nokia 7 Plus our preferred choice.