OnePlus 8 is offering a maximum of 12GB of RAM while the OnePlus 7T comes with up to 8GB of RAM. 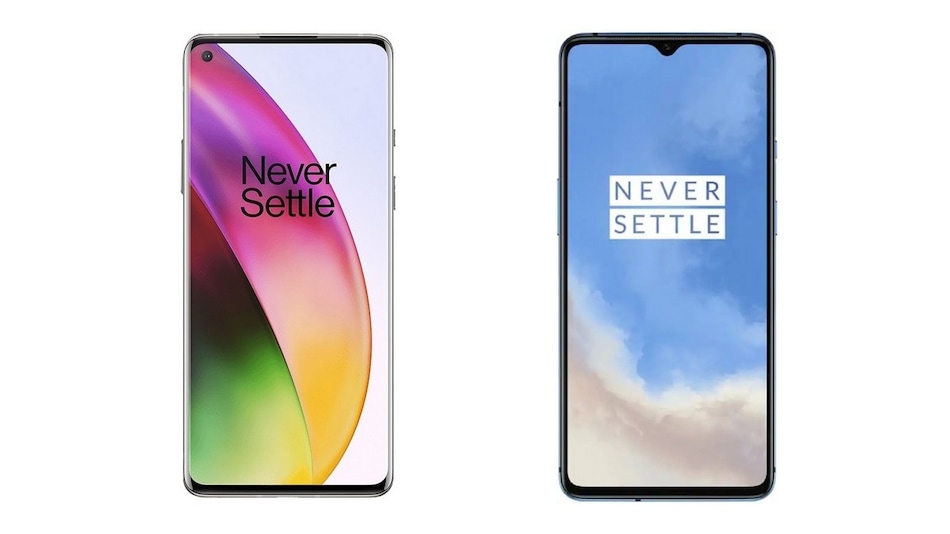 OnePlus 8, which is a part of the new OnePlus 8 series, has been launched. The phone is powered by Snapdragon 865 SoC, and features a triple rear camera setup having a 48-megapixel main sensor. It packs a large 4,300mAh battery with Warp Charge 30T fast charging. Other key specifications of the phone include an in-display fingerprint sensor, Android 10, and USB Type-C port. The OnePlus 8 will succeed the company's OnePlus 7T smartphone. In this article, we pit the OnePlus 8 against OnePlus 7T, to see exactly what has changed between the two OnePlus phones, at least on paper.

OnePlus 8 has been made available in two variants. The price of the new smartphone by OnePlus starts at $699 (roughly Rs. 53,200) for the base 8GB + 128GB variant. The 12GB + 256GB model will cost the buyers $799 (roughly Rs. 60,800). Colour options available for customers include Onyx Black, Glacial Green, and lnterstellar Glow.

The OnePlus 8 is a dual-SIM phone that runs Android 10 with OxygenOS on top. It comes with a 6.55-inch full-HD+ (1,080x2,400) Fluid AMOLED display with 20:9 aspect ratio and 402 pixels per inches. The display is protected by 3D Corning Gorilla Glass. OnePlus 8 is powered by a Qualcomm Snapdragon 865 SoC along with up to 12GB of LPDDR4X RAM.

As for OnePlus 7T, it also runs OxygenOS, based on Android 10, and is a dual-SIM smartphone. Indian users of the phone received the OxygenOS 10.3.1 update in February. It was launched in India in September 2019. OnePlus 7T features a 6.55-inch (1,080x2,400 pixels) Fluid AMOLED display with 90Hz refresh rate and 20:9 aspect ratio. The display also comes with 3D Corning Gorilla Glass protection. It is powered by Qualcomm Snapdragon 855+ SoC.

OnePlus 7T also sports a triple rear camera setup. It has got a 48-megapixel main camera, a 12-megapixel telephoto shooter, and a 16-megapixel ultra-wide-angle shooter with 117-degree field-of-view. It also packs dual LED flash. The main camera support both OIS and EIS. There is a 16-megapixel front shooter onboard as well.