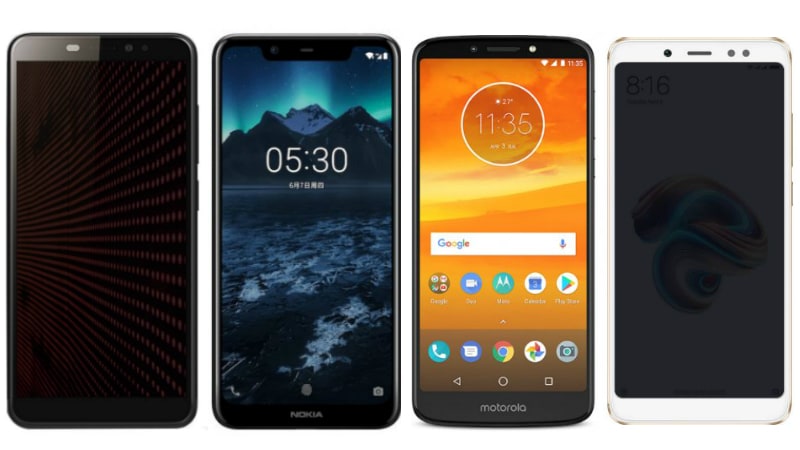 The Nokia X5 has finally gone on sale in China, and the smartphone's key features include a dual rear camera setup stacked vertically, a display notch, and the fact that it runs on pure Android 8.1 Oreo operating system. Alongside all of this is HMD Global's promise of rolling out fast and steady Android updates and security patches, something that the company has been doing diligently. The Nokia X5 is the second smartphone in the Nokia X-series, the first being the Nokia X6 launched earlier this year. We pit the Nokia X5 against the Redmi Note 5 Pro, Asus ZenFone Max Pro M1, and the Moto E5 Plus to see how it fares against the competition.

The Nokia X5 has a 5.86-inch display, while the other three sport a slightly larger 6-inch display. Asus and Xiaomi offer display resolution at 1080x2160 pixels, while Nokia and Motorola offer 720x1520 and 720x1440 pixel resolutions respectively. Only the Nokia X5 features a display notch, while the others have sufficient bezel on top. Nokia X5 is the only model to sport a MediaTek Helio P60 SoC, while Asus and Xiaomi both offer the Snapdragon 636 processor, and the Moto E5 Plus offers a Snapdragon 430 SoC. All the phones offer multiple storage and RAM capacity, except for the Moto E5 Plus which only offers 3GB RAM and 32GB storage. Only the Redmi Note 5 Pro offers 6GB RAM, while the other two max out at 4GB RAM options - though the 6GB RAM variant of Asus ZenFone Max Pro M1 will make its way to India later this month. All the phones support a microSD card slot for further expansion of memory, with the Nokia X5 supporting up to 256GB cards, the Redmi Note 5 Pro up to 128GB cards, ZenFone Max Pro M1 up to 2TB cards, and the Moto E5 Plus up to 128GB cards.

The Asus ZenFone Max Pro M1, Redmi Note 5 Pro, and the Nokia X5 have a dual camera setup on the back. Asus and Nokia offer a 13-megapixel primary sensor and a 5-megapixel secondary sensor. On the front, both the smartphones sport an 8-megapixel sensor. The Redmi Note 5 Pro also sports a vertical dual camera module at the back with a 12-megapixel primary sensor and a 5-megapixel secondary sensor. The selfie camera gets a 20-megapixel sensor. Only the Moto E5 Plus sports a single 12-megapixel rear camera, and a single 5-megapixel selfie camera with selfie light. Nokia, Asus, and Motorola phones offer pure Android, while the Xiaomi phone comes with the MIUI 9 skin on top. All the smartphones support dual-SIM slots (Nano + Nano), and battery capacity is the highest on the Motorola and Asus smartphones at 5000mAh. The Redmi Note 5 Pro comes in second with a 4000mAh battery, and the Nokia X5 packs only a 3060mAh battery.

On paper, in terms of specifications. all three competing smartphones give tough competition to the Nokia X5. The Nokia X5 particularly lacks in the battery and processor department, and it also has a slightly smaller screen than the others. However, it is the only device that sports a display notch, if that's something that attracts you.