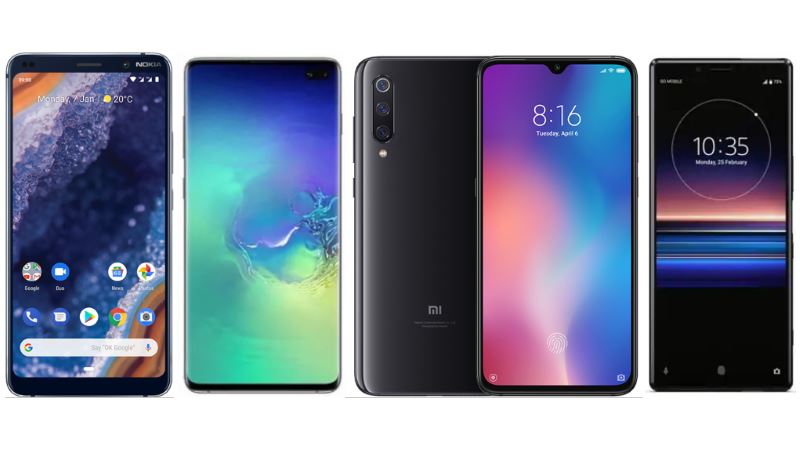 Nokia 9 PureView made its official debut in Barcelona on Sunday. This latest flagship smartphone is targeted at the consumers, who love photography and are looking to try new and interesting technologies in the space. The Nokia 9 PureView comes with as many as five rear cameras, all of which are triggered when a picture is taken. The phone then fuses the data from the five cameras to generate a single image, which the company claims is “the richest image capture possible.” Although there aren't any other smartphones in market with five rear cameras, the Nokia 9 will be taking on the likes of Samsung Galaxy S10+, Xiaomi Mi 9, and Sony Xperia 1, all of which come with three cameras on the back and claim to offer an amazing imaging experience.

In this article, we compare the Nokia 9 PureView, Samsung Galaxy S10+, Xiaomi Mi 9, and Sony Xperia 1 smartphones to take a look at how the four phones stack up to each other. All four phones are the flagship models of the respective smartphone makers and will go on sale in select markets around the world over the coming weeks.

Under the hood, the Nokia 9 PureView comes with older Qualcomm Snapdragon 845 SoC, whereas the Samsung Galaxy S10+, Xiaomi Mi 9, and Sony Xperia 1 are powered by the latest Qualcomm Snapdragon 855 SoC. It is important to note here that in some regions, Galaxy S10+ will come with Exynos 9820 SoC, instead of Snapdragon 855. Additionally, the Nokia phone includes 6GB of RAM and 128GB of inbuilt storage, same as the Xperia 1 and Mi 9 base model. However, the Galaxy S10+ has 8GB of RAM and 128GB of storage in its base variant, which goes up to 12GB of RAM and 1TB of storage. The Xperia 1 and Galaxy S10+ also feature microSD card slot for further storage expansion, whereas the Mi 9 is missing the slot and the same is unconfirmed for the Nokia 9 PureView at this point.