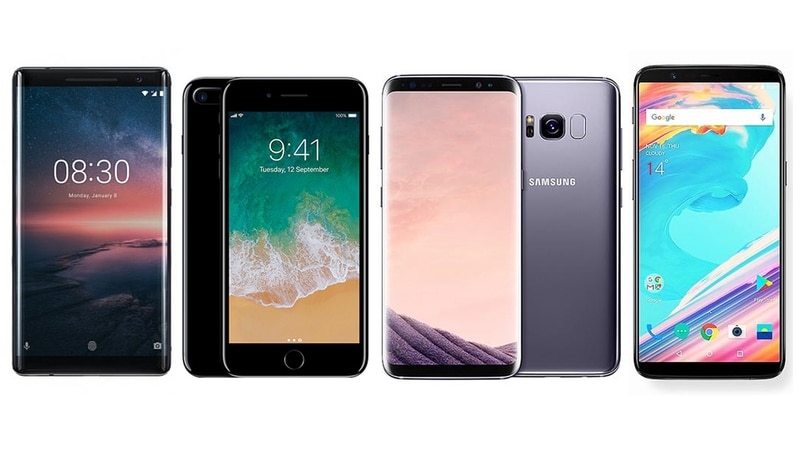 Nokia 8 Sirocco, HMD Global's latest flagship smartphone, was unveiled globally back at MWC 2018 and has now made its way to the Indian shores. The Nokia 8 Sirocco has top-end specifications, though it runs last year's flagship mobile SoC from Qualcomm, as well as a premium build with a curved glass finish and a precision-crafted stainless steel frame that's said to be more than twice as strong as 6000 series aluminium. It is essentially an upgraded version of the Nokia 8, which was launched back in August last year.

As we mentioned, the Nokia 8 Sirocco was launched in India this week, and to give you a better idea about whether you should buy the smartphone, we compare it with other premium smartphones in a similar price range. These are the iPhone 7 Plus, the Samsung Galaxy S8, and, just for the sake of comparison with a similarly endowed but significantly cheaper smartphone - the OnePlus 5T. We compare HMD Global's latest flagship with these rivals in terms of price, features, and specifications.

The Nokia 8 Sirocco price in India has been set at Rs. 49,999 (best buy price), and it will go on sale from April 30 in the country. As for the Nokia 8 Sirocco launch offers, Airtel prepaid users will get 20GB additional data on each of the first six recharges, while postpaid subscribers will get complimentary 20GB per month. Airtel customers will also get an extended free subscription to the Airtel TV app till December 31, 2018. Buyers will also get 25 percent instant discount on domestic hotels on bookings made via MakeMyTrip. Purchases made using ICICI Bank cards will get 5 percent cashback till May 31; the handset will be available with no-cost EMIs on credit cards, Bajaj FinServ, and Home Credit.

In comparison, the two-year-old iPhone 7 Plus is available in the country in two inbuilt storage variants - 32GB and 128GB, priced at Rs. 62,840 (MRP) and Rs. 72,060 (MRP) respectively. To recall, Apple had bumped up the prices of its iPhone models in India following a customs duty hike in the Union Budget 2018.

Nokia 8 Sirocco vs iPhone 7 Plus vs Samsung Galaxy S8 vs OnePlus 5T features compared
The Nokia 8 Sirocco has several highlight features to boast of, such as its curved Corning Gorilla Glass 5 finish, a frame built out of a single piece of stainless steel, IP67 rating for dust and water resistance, a dual rear camera setup with Carl Zeiss branded optics, the company's Bothie technology, three microphones capable of recording 24-bit audio, as well as Qi wireless charging. It's also an Android One smartphone, implying a stock operating system that will receive quick updates.

The iPhone 7 Plus, on the other hand, has a 3D Touch display, IP67 dust and water resistance, Apple Pay, and the first dual rear camera setup on iPhone; however, the presence of no headphone jack. The Samsung Galaxy S8 on the other hand has an IP68 rating for dust and water resistance, a bezel-less 18.5:9 display with Corning Gorilla Glass 5, wireless charging support, an iris scanner, the Bixby virtual assistant, Samsung Pay support (with both NFC and MST), and a Dual Pixel camera.

Coming to the OnePlus 5T, the smartphone's biggest highlight remains its top-end specifications at a price significantly lower than its predecessors. It also bears an 18:9 display with Corning Gorilla Glass 5, Face Unlock tech, a well-received Reading Mode, up to 8GB of RAM, as well as a dual rear camera setup.

The single-SIM (Nano) Nokia 8 Sirocco is an Android One smartphone that currently runs Android 8.0 Oreo. It sports a 5.5-inch QHD (1440x2560 pixels) pOLED display with 3D Corning Gorilla Glass 5, and It is powered by an octa-core Qualcomm Snapdragon 835 SoC coupled with 6GB of LPDDR4X RAM. It bears a 12-megapixel wide-angle sensor on its primary rear camera, complete with an f/1.75 aperture and 1.4-micron pixels. This is accompanied by a 13-megapixel telephoto lens capable of providing 2x optical zoom, and featuring an f/2.6 aperture, and 1-micron pixels. The dual rear camera setup features a dual-tone LED flash as well as Zeiss optics. On the front, the smartphone has a 5-megapixel camera paired with a fixed focus lens, f/2.0 aperture, and 1.4-micron pixels.

The single-SIM (Nano) iPhone 7 Plus on the other hand runs iOS 11.3, and sports a 5.5-inch full-HD (1080x1920 pixels) 'Retina HD' IPS display with 3D Touch tech. It is powered by the Apple A10 Fusion SoC with the M10 motion coprocessor, coupled with 3GB of LPDDR4 RAM. It bears a dual rear camera setup, with one wide-angle 12-megapixel camera (f/1.8 aperture) and one telephoto 12-megapixel camera (f/2.8 aperture), complete with OIS and a Quad-LED True Tone flash. On the front, it bears a 7-megapixel FaceTime HD camera with an f/2.2 aperture.

The iPhone 7 Plus comes in two storage variants - 32GB and 128GB, neither of which are expandable via microSD card. Sensors on board include an accelerometer, ambient light sensor, barometer, 3-axis gyroscope, and a proximity sensor. Connectivity options include 4G VoLTE, Wi-Fi 802.11ac, Bluetooth v4.2, GPS/A-GPS, NFC, and a Lightning port. It is powered by a 2900mAh battery. It measures 158.2x77.9x7.3mm and weighs 188 grams.

The Samsung Galaxy S8 sports 12-megapixel 'Dual Pixel' rear camera with optical image stabilisation and an f/1.7 aperture. On the front, it features an 8-megapixel front camera with autofocus and an f/1.7 aperture. It has 64GB of inbuilt storage that's expandable via microSD card (up to 256GB) in a hybrid dual-SIM configuration. Connectivity options on the Samsung Galaxy S8 include 4G VoLTE (Cat. 16), Wi-Fi 802.11ac (2.4GHz, 5GHz), Bluetooth v5.0, USB Type-C, a 3.5mm headphone jack, NFC, and GPS. Sensors on board include an accelerometer, ambient light sensor, barometer, gyroscope, heart rate sensor, magnetometer, and proximity sensor. It supports Samsung Pay, with NFC and MST connectivity. The two smartphones come with iris scanner, fingerprint scanner, and facial recognition. The Galaxy S8 packs a 3000mAh that supports wireless charging as well as fast charging. It measures 148.9x68.1x8mm and weighs 155 grams.

The dual rear camera setup on the OnePlus 5T comprises a primary 16-megapixel Sony IMX398 sensor with 1.12-micron pixels, and an aperture of f/1.7, as well as a secondary 20-megapixel Sony IMX376K sensor with a telephoto lens and a 27.22mm focal length. One the front it sports a 16-megapixel Sony IMX371 sensor. Storage on board is either 64GB or 128GB, depending on the variant, with no expansion via microSD card. Connectivity options include 4G VoLTE, Bluetooth v5.0, Wi-Fi 802.11ac, GPS/ A-GPS, 3.5mm headphone jack, and USB Type-C. Sensors on board the OnePlus 5T include an accelerometer, ambient light sensor, digital compass, gyroscope, proximity sensor, and an RGB sensor. It measures 156.1x75x7.3mm and weighs 162 grams. It is powered by a 3300mAh non-removable battery and supports the company's Dash Charge fast charging.