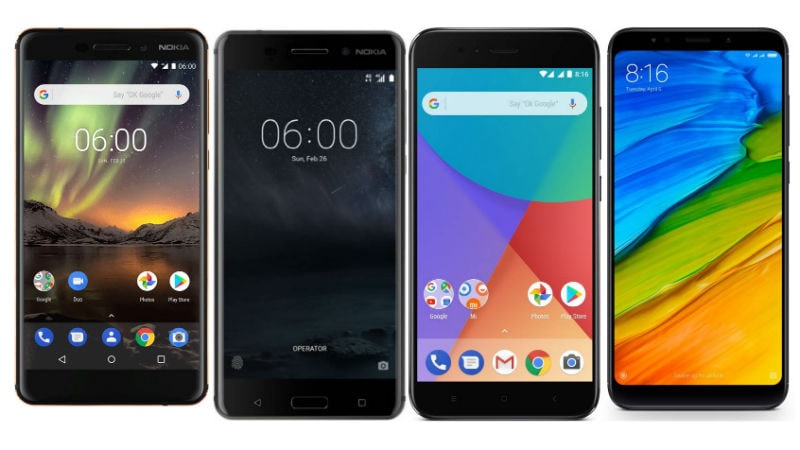 The Nokia 6 (2018) variant comes with competitive features, but there are several other smartphones in the segment which are already quite popular. Chinese manufacturer Xiaomi recently launched the Redmi Note 5 which packs solid specifications. The company also has an Android One smartphone called Mi A1. Incidentally, HMD Global also launched a 4GB variant of the original Nokia 6 in India recently. We take a look at the key differences between the new the Nokia 6 (2018), Nokia 6 (original), Xiaomi Mi A1, and the Xiaomi Redmi Note 5.

In comparison, the Nokia 6, packing 3GB RAM, arrived in India in June last year with a price tag of Rs. 14,999. However, recently, HMD Global launched the 4GB variant in the country priced at Rs. 16,999. The new handset comes in a single colour option: Matte Black.

Xiaomi launched the Mi A1 back in September last year with a price tag of Rs. 14,999, though it received a price cut and is currently available at Rs. 13,999. This Android One smartphone is available for purchase through various online and offline channels in the country, including Flipkart, Mi.com, Sangeetha, Poorvika, Big C, LOT, and UniverCell among others. It comes in various colour options, including Black, Gold, Rose Gold, and the Special Edition Red.

The Nokia 6 (2018) is an Android One offering running Android 8.0 Oreo. The smartphone will come in single or dual-SIM variants. It features a 5.5-inch full-HD (1080x1920 pixels) IPS display along with Gorilla Glass 5 protection. The handset is powered by the octa-core Qualcomm Snapdragon 630 SoC, coupled with 3GB or 4GB RAM.

When it comes to the original Nokia 6, it was launched with Android Nougat but received an update to Android 8.0 Oreo recently. The smartphone features a 5.5-inch full-HD display with 2.5D curved Corning Gorilla Glass protection. It is powered by an octa-core Qualcomm Snapdragon 430 SoC. The smartphone has a 16-megapixel rear camera sensor and an 8-megapixel front camera sensor. Both sensors have a f/2.0 aperture.

The Nokia 6 4GB RAM variant comes with 64GB of inbuilt storage that is expandable via microSD card (up to 128GB). The handset has usual connectivity options such as 4G VoLTE, Wi-Fi, Bluetooth, GPS/ A-GPS, Micro-USB, and a 3.5mm headphone jack. There is a front-facing fingerprint sensor. The smartphone also has stereo speakers with Dolby Atmos audio enhancement. Besides, it packs a 3000mAh battery.

The dual-SIM Xiaomi Mi A1, on the other hand, was debuted with Android 7.1.2 Nougat but has already received an update to Android 8.0 Oreo. The smartphone sports a 5.5-inch full-HD (1080x1920 pixels) display with 16:9 aspect ratio and Corning Gorilla Glass protection. It has a Qualcomm Snapdragon 625 SoC under the hood, coupled with 4GB of RAM. The handset has a dual rear camera setup with two 12-megapixel image sensors - one in 1.25-micron pixel size and with a wide-angle, f/2.2 aperture lens and the other one in 1-micron pixel size and with a f/2.6 aperture telephoto lens. The camera sensor also offers 2x optical zoom and features such as a proprietary Portrait Mode. Also, a 5-megapixel camera sensor is available on the front with a real-time beautification mode.

Xiaomi has provided 64GB inbuilt storage on the Mi A1, expandable via microSD card (up to 128GB) that comes in a hybrid dual-SIM configuration. The smartphone has 4G VoLTE, dual-band Wi-Fi 802.11ac, GPS/ A-GPS, USB Type-C, and a 3.5mm headphone jack on the connectivity front. There is also a front-facing fingerprint sensor that also works as a home button. Lastly, it packs a 3080mAh battery and has audio enhancements including a 10V smart power amplifier, DHS Audio Calibration Algorithm.

Meanwhile, the Xiaomi Redmi Note 5 smartphone comes with a 5.99-inch touchscreen display with a resolution of 1080x2160 pixels. It is powered by 2GHz octa-core Qualcomm Snapdragon 625 processor, coupled with 4GB of RAM. As far as the cameras are concerned, the Xiaomi Redmi Note 5 packs a 12-megapixel primary camera on the rear and a 5-megapixel front shooter for selfies. The phone packs 64GB of internal storage that can be expanded via microSD card.

The Xiaomi Redmi Note 5 runs Android 7.0 and is powered by a 4000mAh non-removable battery. Connectivity options include Wi-Fi, GPS, Bluetooth, USB OTG, FM, 3G and 4G (with support for Band 40 used by some LTE networks in India). Sensors on the Redmi Note 5 include a magnetometer, proximity sensor, accelerometer, ambient light sensor, and gyroscope.

Nokia 6.1 vs Mi A1 vs Redmi Note 5 vs Nokia 6 comparison
Comments