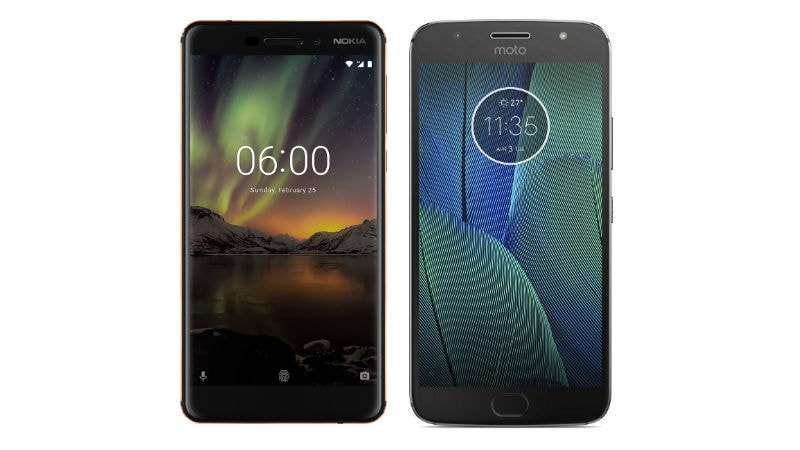 Nokia 6 (2018) was unveiled globally by HMD Global at MWC 2018 last month as the successor to last year's Nokia 6. It had been unveiled in China earlier in the year. The new model is a part of Google's Android One programme and is accompanied with a bunch of features, including the company's Bothie mode. The phone also has an improved build that is made of a single, anodised 6000 series aluminium block. The key specifications of the Nokia 6 (2018) make it a tough competitor for the Moto G5S Plus that debuted in India in August last year. So, we are here taking a look at the Nokia 6 (2018) price, specifications, and key features, and compare them with those of the Moto G5S Plus.

The Nokia 6 (2018) price has been set starting at EUR 279 (approximately Rs. 22,200), without taxes and subsidies. The smartphone will go on sale in early April in two RAM/ storage variants - 3GB RAM/ 32GB storage and 4GB RAM/ 64GB storage - and will come in three colour variants, including Black/ Copper, White/ Iron, and Blue/ Gold. The Nokia (2018) price in India hasn't been announced yet. However, it is already expected that this new Nokia model will be launched in the country on April 4. HMD Global has already sent invites for the April 4 event, albeit without confirming any launch plans.

The Moto G5S Plus price in India, on the other hand, was set at Rs. 15,999 last year, though the smartphone in December received a price cut and is currently available at Rs. 14,999. It comes in Blush Gold and Lunar Grey colour options and is available via Amazon.in and Moto Hub stores in the country.

Available in single-SIM and dual-SIM variants, the Nokia 6 (2018) runs Android 8.0 Oreo. This is likely to be upgraded to Android P soon after its formal release for Google Pixel devices, thanks to the Android One branding. The smartphone features a 5.5-inch full-HD (1080x1920 pixels) IPS display along with a Corning Gorilla Glass 5 protection on top. It is powered by an octa-core Qualcomm Snapdragon 630 SoC, paired with 3GB or 4GB of LPDDR4 RAM.

The Nokia 6 (2018) flaunts a 16-megapixel rear camera with PDAF, f/2.0 aperture, Zeiss optics, and dual-tone LED flash. The front of the smartphone has an 8-megapixel fixed focus camera with an f/2.0 aperture. There are 32GB and 64GB storage options that both are expandable via microSD card (up to 128GB). In terms of connectivity, the handset has 4G VoLTE, Wi-Fi 802.11ac, Bluetooth v5.0, GPS/ A-GPS, FM radio, USB Type-C, and a 3.5mm headphone jack. There is a single speaker that comes equipped with a smart amplifier. Plus, the handset supports Nokia spatial audio with two microphones. It packs a 3000mAh battery that is rated to deliver up to 16 hours of talk time. Besides, the smartphone measures 148.8x75.8x8.15mm (going up to 8.6mm with the camera bump).

In contrast, the dual-SIM (Nano) Moto G5S Plus runs Android 7.1 Nougat and has a 5.5-inch full-HD (1080x1920 pixels) IPS LCD panel. The smartphone has an octa-core Qualcomm Snapdragon 625 SoC, coupled with 4GB of RAM. For capturing images and recording videos, there is a dual rear camera setup with two 13-megapixel images sensors carrying an f/2.0 aperture. The rear camera setup has dual-LED flash and supports depth editing and colour correction. On the front, there is an 8-megapixel sensor with an f/2.0 aperture, wide-angle lens, and an LED flash.

The Moto G5S Plus has 64GB of onboard storage that is expandable via microSD card (up to 128GB). Connectivity options on the smartphone include 4G VoLTE, Wi-Fi 802.11 a/b/g/n, Bluetooth v4.2, GPS/ A-GPS, Micro-USB, and a 3.5mm headphone jack. The smartphone packs a 3000mAh battery that can offer up to six hours of power in 15 minutes when charged using the TurboPower charger. Lastly, it measures 153.5x76.2x8mm and weighs 168 grams.