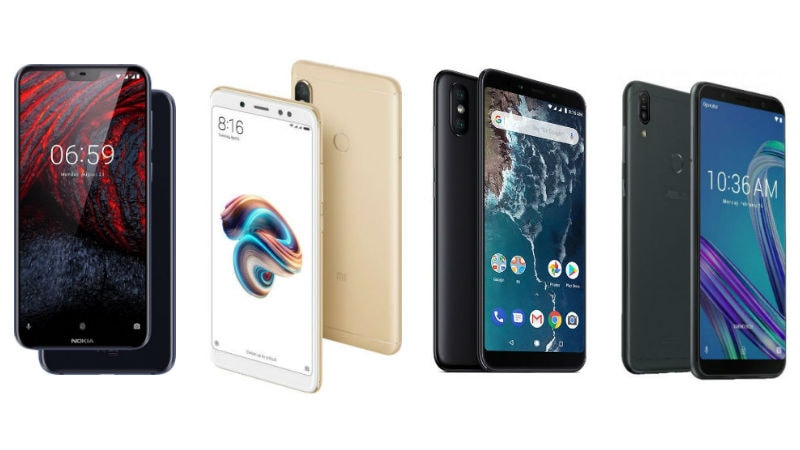 Nokia 6.1 Plus price in India brings it close to the Redmi Note 5 Pro, Mi A2, and ZenFone Max Pro M1

Nokia 6.1 Plus was launched in India this week alongside the Nokia 5.1 Plus. The smartphones are a part of the company's new generation of handsets that feature a new all-screen design philosophy and incorporate a display notch. The Nokia 6.1 Plus is the global variant of the Nokia X6 that was launched by Nokia licensee HMD Global earlier this year. The key features of the handset include Android One, Snapdragon 636 SoC, vertical dual rear camera setup, Nokia branding in the front, and a fingerprint sensor. Notably, the Nokia 6.1 Plus price in India starts at Rs. 15,999 and HMD Global has launched only one RAM/ storage variant of the handset in the country.

At its price range, the Nokia 6.1 Plus - quite obviously - will compete with the Xiaomi Redmi Note 5 Pro in the Indian market because of its pricing. The smartphone will also compete with Xiaomi's latest Android One smartphone - Mi A2. Additionally, Asus also has a popular affordable smartphone called ZenFone Max Pro M1 in India. While the Redmi Note 5 Pro is arguably dominating the market with its compelling hardware and MIUI features, the new ZenFone Max Pro M1 had arrived with a list of attractive features to take on the competition, including a dual rear camera setup, thin bezel display, metal body, a large battery, and a stock Android experience. Meanwhile, the Mi A2 like its predecessor Mi A1 is an Android One powered handset with stock Android 8.1 Oreo, and no MIUI.

Therefore, we take a look at the Nokia 6.1 Plus price in India and specifications and compare them with those of the Redmi Note 5 Pro, Mi A2, and Asus Zenfone Max Pro M1.

Nokia 6.1 Plus vs Redmi Note 5 Pro vs Mi A2 vs Asus ZenFone Max Pro M1 price in India

Nokia 6.1 Plus vs Redmi Note 5 Pro vs Mi A2 vs Asus ZenFone Max Pro M1 specifications

The Nokia 6.1 Plus is a dual-SIM (Nano) smartphone that runs stock Android 8.1 Oreo. It sports a 5.8-inch full-HD+ (1080x2280 pixels) display that comes with Corning Gorilla Glass 3 protection. It is powered by an octa-core Qualcomm Snapdragon 636 processor, paired with 4GB RAM. In terms of optics, the smartphone features a dual rear camera setup, with a 16-megapixel primary sensor with f/2.0 aperture and 1-micron pixels, while the secondary 5-megapixel monochrome sensor sports a f/2.4 aperture and 1.12-micron pixels. There is a dual-tone flash module at the back as well. The phone comes with a 16-megapixel sensor at the front, coupled with an f/2.0 aperture and 1-micron pixels.

The Nokia 6.1 Plus is equipped with 64GB of inbuilt storage, expandable via microSD card (up to 400GB). The connectivity options in the phone include 4G VoLTE, Bluetooth v5.0, Wi-Fi 802.11ac, USB Type-C (v2.0), GPS/ A-GPS, and a 3.5mm headphone jack. The sensors on board the Nokia 6.1 Plus are an accelerometer, ambient light sensor, gyroscope, digital compass, and a proximity sensor. It is powered by a 3060mAh battery coupled with fast charge tech. In terms of dimensions, the smartphone measures 147.2x70.98x7.99mm, and weighs 151 grams

The Redmi Note 5 Pro is also a dual-SIM (Nano) smartphone. It runs Android Nougat-based MIUI 9 and sports a 5.99-inch full-HD+ (1080x2160 pixels) display with an 18:9 aspect ratio and a 2.5D curved glass. It is powered by an octa-core Snapdragon 636 processor, coupled with Adreno 509 GPU and up to 6GB of RAM. It bears a dual rear camera setup with a 12-megapixel primary sensor along with an f/2.2 aperture and a 5-megapixel secondary sensor that has an f/2.0 aperture. At the front, the Redmi Note 5 Pro features a 20-megapixel camera sensor with a selfie LED flash.

The Redmi Note 5 Pro is equipped with 64GB of inbuilt storage, expandable via microSD card in a hybrid dual-SIM format. Connectivity options include 4G VoLTE, Wi-Fi 802.11 b/g/n, Bluetooth, Micro-USB, and a 3.5mm headphone jack. It is fueled by a 4000mAh battery and measures 158.6x75.4x8.05mm.

Meanwhile, the dual-SIM (Nano) Xiaomi Mi A2 runs stock Android 8.1 Oreo. It sports a 5.99-inch full-HD+ (1080x2160 pixels) display with an 18:9 aspect ratio, a pixel density of 403ppi, and 2.5D curved Gorilla Glass 5. The smartphone comes with an octa-core Snapdragon 660 SoC (four cores clocked at 2.2GHz and four cores clocked at 1.8GHz) paired with either 4GB or 6GB of RAM. It sports a dual rear camera setup, with a 12-megapixel Sony IMX486 sensor in the primary camera, featuring 1.25-micron pixels with an f/1.75 aperture. It comes with a 20-megapixel IMX376 sensor as the secondary rear camera, with 2-micron pixels, 4-in-1 Super Pixel tech, and an f/1.75 aperture. The rear camera setup also has a flash module. At the front, the smartphone bears the same 20-megapixel sensor, complete with a soft-light flash module. It bears a fingerprint sensor on the rear panel.

In the camera department, the 3GB RAM/ 4GB RAM variant of the ZenFone Max Pro M1 bears a dual rear camera setup with a primary 13-megapixel Omnivision sensor, with f/2.2 aperture, and a secondary 5-megapixel depth sensing sensor, both with LED flash. On the front, the variant comes with an 8-megapixel selfie camera that offers a 5P lens, an 85.5-degree lens, and an aperture of f/2.0. The 6GB RAM variant however has a 16-megapixel (f2/.0) + 5-megapixel rear camera combination and a 16-megapixel selfie camera (f/2.0). There is a 5,000mAh battery under the hood, with support for 10W charging.

Connectivity on the ZenFone Max Pro M1 includes 4G LTE, Wi-Fi 802.11 a/b/g/n with Wi-Fi Direct, Bluetooth v4.2, GPS/ A-GPS, GLONASS, Micro-USB, and a 3.5mm headphone jack. There is also a fingerprint sensor and a Face Unlock sensor on the smartphone.