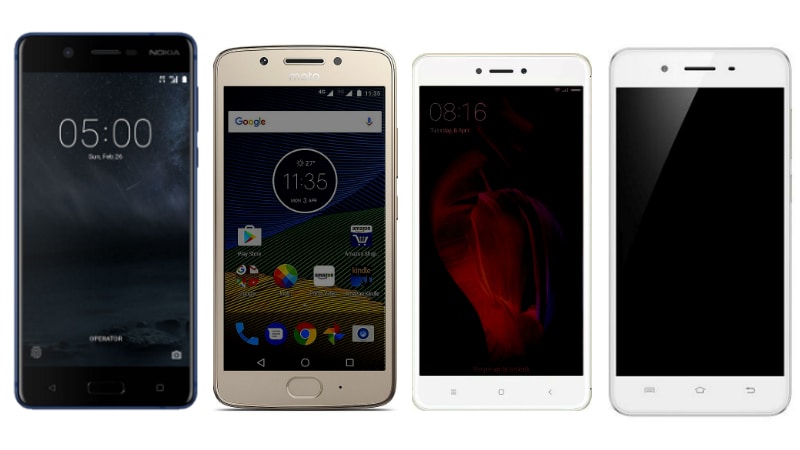 The Nokia 5, launched alongside the Nokia 3 and Nokia 6, is heading to the Indian market in July. Priced at Rs. 12,899, Nokia 5 is set to compete in the heavily crowded mid-range segment in India. At this price range, Nokia 5 is going to face heavy competition especially from the Redmi Note 4, Vivo Y55s and the Moto G5 smartphones in India. All four smartphones feature specifications and features rather similar to each other's, but there are a few differences that give one or the other a leg up in the race to pique the buyers' interest. We pit the Nokia 5 against Xiaomi Redmi Note 4 (3GB + 32GB), Vivo V5, and Motorola's Moto G5 to ascertain which is the right device for you.

The Nokia 5 shines on the software front with the latest Android 7.1.1 Nougat, while the Moto G5 also sports the Android 7.0 Nougat version, not lagging behind. The other two offer Android Marshmallow with their own skins on top. The only smartphone that does not have a fingerprint sensor in this lot is the Vivo Y55s smartphone. In all the other specification comparisons, the four smartphones fight neck to neck, with Nokia 5 lagging behind slightly in screen resolution, and RAM. It’s worth noting that the Nokia 5 has an 8-megapixel front camera, while the others sport a 5-megapixel front sensor.

Nokia 5 fights well on paper, but offers only 16GB of internal storage, while the Redmi Note 4 offers 64GB in the same price range. The big pain point for the Xiaomi phone is its availability, and if you can’t get your hands on one till July 7, you could consider pre-ordering the Nokia 5 instead, though we suggest you stay tuned to Gadgets 360 for detailed review of the Nokia 5 before you make a decision.

Check out the full comparison of the Nokia 5 vs Redmi Note 4 vs Vivo Y55s vs Moto G5 below: