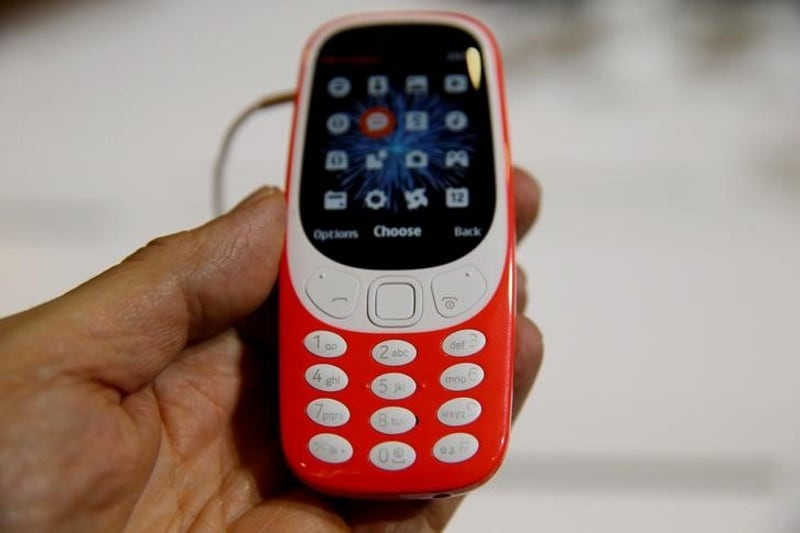 For Europeans, Nokia's revamped 'brick' is a throwback to a simpler, more innocent age, when phones were for speaking and reading on the train meant buying a newspaper.

For Africans, however, the jazzed-up 3310, which relaunched in Nokia's home market of Finland on Wednesday, is an expensive imitation of the simple handset that remains the backbone of communication across the continent.

Although mobiles are now as common in Africa as they are in the United States or Europe, smartphones are rarer, making up only one in three handsets in South Africa and one in four in Nigeria, according to a 2016 study by the Pew Research Centre.

In many cases, the cost of both handsets and data is the main factor constraining smartphone sales.

But Africans also like the legendary durability of the 'brick' and its weeks-long battery - important considerations in countries where insurance and electricity cannot be taken for granted.

Even in the flashiest parts of Lagos, Nigeria's brash commercial capital, bankers barking orders into the latest model iPhone will often have an ancient Nokia in their back pocket as a fail-safe for when their battery gives up

"In Nigeria, people like to use big phones but the small ones are also selling because not everybody can afford Android, and the battery is really strong," said Clara Paul, a phone saleswoman in Ikeja, a tech market in the heart of Lagos.

In front of her on a street-side stall sat an array of Chinese-branded smartphones alongside small Nokia handsets that in Europe would belong to a telephony museum. On a good day, Paul says she shifts as many as 10 for $10 (roughly Rs. 645) each.

Durable, battery lasts
The original Nokia 3310, a basic talk and text phone, was the world's most popular device in 2000 and the first handset owned by many of today's smartphone users.

Once the world's dominant phonemaker, Nokia Oyj sold its handset operations to Microsoft in 2014, leaving it to focus on telecoms network equipment.

But its brand has gone back on the mobile market across much of Europe and India thanks to a licensing deal with HMD Global, a new company led by former Nokia executives and backed by Chinese electronics giant Foxconn. HMD has sole use of the Nokia brand on all phones and tablets for the next decade, and it will pay royalties to Nokia Oyj.

The makers of the new phone hope that its 22 hours of talk time and up to one month of standby time will heighten its appeal for customers looking for a break from smartphone overload or a reliable device for lively nights out.

"People love Nokias because they're durable and the battery lasts for a very long time," said Colins Nwosu, the head of retail at Nigerian mobile phone distributor Finet. "But to be honest, it's a bit expensive."

As well as its battery and durability, the old Nokia has another advantage - its lack of high-tech wizardry means it is untraceable and unhackable, another factor for those living under repressive African governments.

During a recent meeting with Reuters in Johannesburg, a senior Zimbabwean intelligence agent laid out on the table his three battered old Nokia handsets - the price he pays to ensure his movements and messages go undetected.

"Smartphone?" he said, with a chuckle. "No way, my brother. Way too risky."