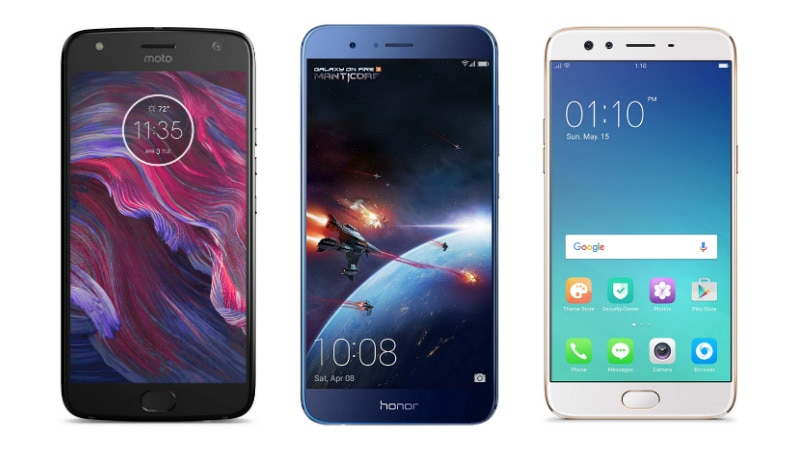 Moto X4 6GB RAM variant has been launched in India as an upgrade over the original model that debuted in the country in last November. The new Moto X4 6GB RAM variant is priced at Rs. 24,999, and comes with more RAM than the original 3GB and 4GB options. Moto X4 initially comes with Google Assistant support but an update with Amazon's Alexa integration is also expected to make the new Moto handset operable with two of the most advanced virtual assistants. But despite larger RAM capacity than that of its original versions and enhanced virtual assistant support, the new variant is facing the heat from Honor 8 Pro and Oppo F3 Plus that both come in 6GB RAM variants and are available in the same price bracket.

We take a look at the Moto X4 6GB RAM price in India, specifications, and features and compare them with those of the Honor 8 Pro and Oppo F3 Plus to help you decide the right pick for you.

Moto X4 6GB RAM price in India is Rs. 24,999 and is available for purchase through Flipkart with launch offers such as a flat discount worth Rs. 1,500 for ICICI credit card customers, Rs. 3,000 exchange discount, and a bundled data offer on Vodafone network to offer up to 490GB data free on recharges of Rs. 199. Customers can also avail no-cost EMI options.

The Honor 8 Pro, on the other hand, is priced at Rs. 29,999. It is available for purchase through Amazon with a bundled Vodafone data offer to avail up to 45GB over a course of five months.

Contrarily, the Oppo F3 Plus 6GB variant is available with a price tag of Rs. 22,900 and comes with free Hotstar Premium subscription for three months.

In terms of storage, the Moto X4 has 64GB onboard storage that is expandable via microSD card (up to 128GB). The smartphone packs a 3000mAh battery that is touted to deliver "all-day" power on a single charge. Particularly, when coupled with a 15W TurboPower charger (bundled in the box), the handset is claimed to provide up to six hours of juice in 15 minutes of charging time. Furthermore, the smartphone has features such as Moto Experiences with gesture support, Moto Display, Moto Voice, and a built-in password manager called Moto Key. It measures 148.35x73.4x7.99mm (9.45mm at camera bump) and weighs 163 grams.

On the other hand, the dual-SIM Honor 8 Pro comes with Android 7.0 Nougat-based EMUI 5.1 and is upgradable to Android 8.0 Oreo-backed EMUI 8.0. The handset features a 5.7-inch QHD (1440x2560 pixels) LTPS LCD panel with Corning Gorilla Glass 3 protection and is powered by a HiSilicon Kirin 960 SoC with four Cortex-A53 cores clocked at 1.8GHz and four Cortex-A73 cores clocked at 2.4GHz, paired with 6GB of LPDDR4 RAM. It comes with a dual rear camera setup that comprises two 12-megapixel sensors with f/2.2 aperture, laser autofocus lens, LED flash, and 4K video recording support. The dual camera setup enables the handset to capture images in RGB as well monochrome. Also, an 8-megapixel camera sensor is featured on the front with a 77-degree wide-angle lens.

The Honor 8 Pro has 128GB built-in storage, which is further expandable via microSD card (up to 128GB) in a hybrid dual-SIM format. There are connectivity options such as 4G VoLTE, dual-band Wi-Fi 802.11 a/b/g/n/ac, Bluetooth v4.2, USB Type-C, 3.5mm headphone jack, and NFC. It packs a 4000mAh battery that rated to deliver up to 1.44 days of charge on heavy use and two days of regular use.

The Android Marshmallow-based Oppo F3 Plus, on the other side, has 6-inch full-HD (1080x1920 pixels) display and comes with an octa-core Qualcomm Snapdragon 653 SoC. The smartphone has a 16-megapixel rear camera sensor with an LED flash and a dual camera setup on the front with a combination of a 16-megapixel primary camera sensor and an 8-megapixel secondary sensor. The handset has 64GB onboard storage that is expandable via microSD card (up to 256) with a dedicated slot. Lastly, it packs a 4000mAh battery with Oppo's in-house Ultra-Fast VOOC Charging technology.