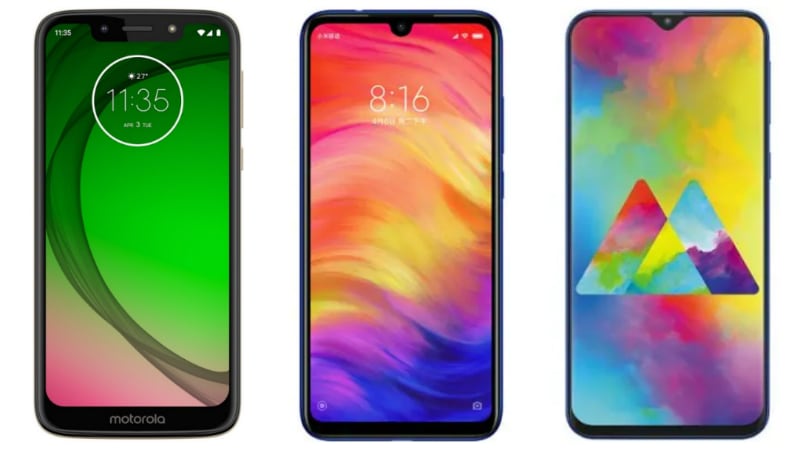 Moto G7 Play debuted as Motorola's newest budget smartphone on Thursday, one of four new Moto G7-Series smartphones unveiled in Brazil - the others being Moto G7, Moto G7 Plus, and Moto G7 Power. The new Moto G7 model is touted to deliver up to 60 percent faster performance than its predecessor. Also, the Moto G7 Play has features such as a traditional display notch and a rear camera with a PDAF (phase detection autofocus) lens. The phone additionally has an octa-core Snapdragon 632 SoC and features a Max Vision HD+ display panel. Thanks to its budget price, the Moto G7 Play looks set to compete against the Redmi Note 7 and Samsung Galaxy M20.

We're here comparing specifications and price of the Moto G7 Play with the Redmi Note 7 and the Samsung Galaxy M20 to help you see the best pick for you. To read about the other Moto G7-Series launches, check out our previous coverage.

The Moto G7 Play price in the US is set at $199 (roughly Rs. 14,200). The smartphone will initially be available in Brazil and Mexico, though it will reach Europe later this month and will roll out over the next month in various parts of Latin America and North America. It comes in Deep Indigo, Starry Black, and Fine Gold. Moreover, the India price and availability of the Moto G7 Play are yet to be announced.

The Samsung Galaxy M20, on the other side, comes at Rs. 10,999 for the 3GB RAM/ 32GB storage variant, whereas its 4GB RAM/ 64GB storage model is priced at Rs. 12,990. The Samsung phone is initially available in India, though it is set to debut in Indonesia next week.

The dual-SIM (Nano) Moto G7 Play runs Android 9 Pie out-of-the-box. The Redmi Note 7, on the other hand, comes with MIUI based on Android Oreo. However, the Samsung Galaxy M20 runs Samsung Experience 9.5 UX based on Android 8.1 Oreo.

Under the hood, the Moto G7 Play has an octa-core Qualcomm Snapdragon 632 SoC, coupled with 2GB of RAM. In contrast, the Redmi Note 7 is powered by a 2.2GHz, octa-core Snapdragon 660 SoC, paired with 3GB, 4GB, and 6GB RAM options. The Galaxy M20 has an octa-core Exynos 7904 SoC along with 3GB and 4GB RAM versions.

The Moto G7 Play has 32GB of onboard storage that is expandable via microSD card (up to 128GB). This isn't in line with the Redmi Note 7 that has 32GB as well as 64GB options along with a microSD card slot for expanding the storage (up to 256GB). The Galaxy M20 also has 32GB and 64GB storage options with microSD card support.

Redmi Note 7 India Launch: Everything We Know So Far

The Moto G7 packs a 3,000mAh battery that supports 10W fast charging through a bundled TurboPower charger. The Redmi Note 7 has a 4,000mAh battery along with Quick Charge 4 support. However, the Samsung Galaxy M20 packs a massive, 5,000mAh battery.