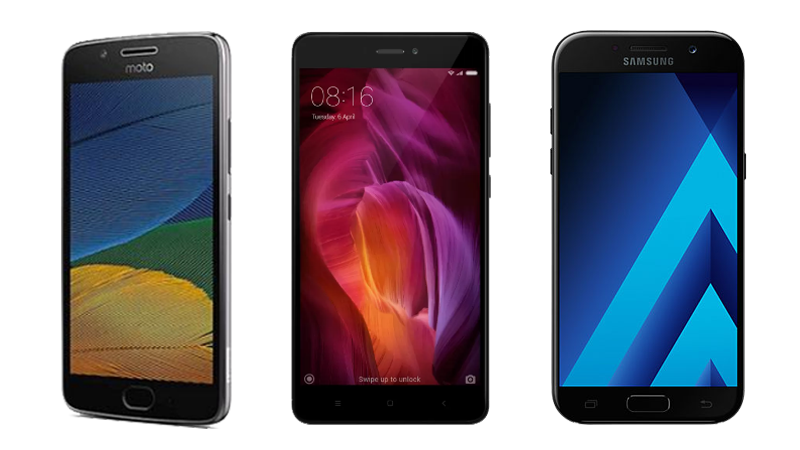 With Moto G5 Plus launched in India, there are three great smartphones to check out in case you are in the market to buy a new handset. Alongside the launch of the Moto phone, the Xiaomi Redmi Note 4 – which has been ruling the roost since its launch in January – is available on Flipkart and Mi.com, while Samsung Galaxy A5 (2017) has finally hit the market. Having so many choices at hand is always great for the consumer, but it can sometimes lead to confusion over which model is best for you. We try to break down the strengths of Xiaomi Redmi Note 4, Moto G5 Plus, and Samsung Galaxy A5 (2017) here.

The USPs of the Moto G5 Plus (Review), introduced at the MWC 2017 in late February, are the near-stock Android 7.0 Nougat software, all-metal design, and Google Assistant - the AI-based virtual assistant. Other notable features of the Moto smartphone include its 12-megapixel rear camera with f/1.7 aperture and dual autofocus pixels, and 5-megapixel wide-angle front camera. Standard Moto features such as the always-on Moto Display and gesture-based Moto Actions are also available on the Moto G5 Plus, as is the new One Button Nav that allows users to navigate the screens using just the fingerprint sensor.

Moto G5 Plus key specifications include a 5.2-inch full-HD screen, 2GHz Snapdragon 625 processor, a fingerprint sensor on the back, up to 128GB storage expansion, and 3000mAh battery with fast-charging. The price of Moto G5 Plus for the base 16GB storage + 3GB RAM variant is Rs. 14,999, while the 32GB storage + 4GB RAM model costs Rs. 16,999. The smartphone can be a good buy for those looking for a compact device that balances hardware and software equally well.

Xiaomi Redmi Note 4 (Review), currently among the most popular affordable smartphones in the Indian market, is another great option to choose. It offers specs similar to Moto G5 Plus, but has a slightly bigger screen (5.5-inch) with the same display resolution. However, the Redmi Note 4 comes with Android 6.0 Marshmallow software and doesn’t have the software features – such as Google Assistant and Moto Actions – that the Moto phone boasts of. The battery capacity, on the other hand, is much bigger at 4100mAh. Both smartphones run on the same chipset; Xiaomi Redmi Note 4 comes in three variants – 32GB storage + 2GB RAM (Rs. 9,999), 32GB storage + 3GB RAM (Rs. 10,999), and 64GB storage + 4GB RAM (Rs. 12,999).

The third option you can check out is the mid-ranger Samsung Galaxy A5 (2017) (First Impressions), which is priced at Rs. 28,990. This model sports design similar to that of the Galaxy S7, is water- and dust-resistant, and features an “enhanced” camera with low-light optimisations. The new Samsung Galaxy A5 (2017) has an always-on 5.2-inch full-HD Super AMOLED screen and Android 6.0.1 Marshmallow operating system. Other key features of the phone include the octa-core 1.9GHz Exynos 7880 processor with 3GB RAM, 32GB internal storage, 16-megapixel camera with f/1.9 aperture on the front and back, 3000mAh battery with fast-charging, fingerprint sensor in front, support for up to 256GB microSD cards, USB Type-C port, and microSD card support up to 256GB. You can opt for the Samsung Galaxy A5 (2017) if you want a decent mid-range smartphone fresh in the market.

So, which model would you go for? Tell us in the comments below.